Pope Francis: to reform does not mean cutting off the past A trip to Moscow for Pope Francis?

The Vatican: Looking To The Past To Understand The Present 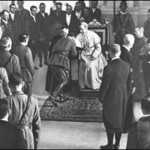 Two anniversaries celebrated during the past week were an occasion to look back in time to the very origins of the challenges the Holy See has been facing in recent years. In fact, only by looking back in time, do we see that the Holy See, and in general the Catholic Church, does not change its point of view. At most it changes the way it approaches issues, but it always adheres to the same principles. In the end, the only true reform is found in continuity.

The first anniversary is that of the establishment 60 years ago of the Chinese Catholic Patriotic Association, that is, the organization which the Chinese government set up in order to control the appointment of bishops and put the Catholic Church under the direct authority of the State.

The anniversary took place one week before the appointment of the new Archbishop of Hong Kong, Michael Yeung, historical director of the local Caritas who is now called upon to carry out a difficult mediation between the thought of his two predecessors: that of Cardinal Joseph Zen, who was always wary of any agreement with Chinese government concerning the appointment of bishops, and that of Cardinal John Tong Hon, who, following the rationale of conceding something in order to gain even more, displayed a certain openness to the agreement, though within limits.

These two positions mirror the positions at stake on the Chinese issue. Although the points of view are completely different, and sometimes even diverging, both are aimed at preserving libertas ecclesiae. They are just different ways of acting: on the one hand, the rejection of any violation of the principle of religious freedom and of any impediment of the Pope’s right to choose new bishops; and on the other hand, the idea that some concession – say, for example, a major involvement of lay people in the consultations for the choice of new bishops – will help relieve the suffering of Catholics of China. According to Archbishop Claudio Maria Celli, who has been working on the Chinese issue since the 1980s, Catholics of China are “always living a cage, but the cage is getting larger.”

However, in order to fully understand the issues at stake, we should look back in time, to when the Patriotic Association was established. The reigning Pope was Pius XII, very much committed to addressing the Chinese issue. He wrote three encyclical letters on China, plus one that is generically addressed to people of the East but which also touches on China.

Pius XII wrote the encyclical Cupimus Imprimis in 1952, when the problems with the Communist regime were becoming more concrete and pressure was being put on the Church not to act against the State. Then he wrote the encyclical Ad Sinarum Gentem in 1954, when the doctrine of sinization added to the increasing persecution, and some of the Chinese clergy asked for a Chinese Church “not only independent for what concerns administration and economics, but also doctrinally.”

Finally, he wrote the encyclical Ad Apostolorum Principis in 1958, a direct response to the establishment of the Patriotic Association. That encyclical is really worth reading in order to understand the current situation. In it he denounced “with a heart filled to its depths with sorrow and anxiety” the attempt to change “so much for the worse that the false doctrine already condemned,” that is, an independent Church, “seems to be approaching its final stages and to be causing its most serious damage.”

Pius XII underscored that the Patriotic Association was founded “by particularly subtle activity,” in order to “join the clergy and the faithful in love of their religion and their country, with these objectives in view: that they might foster patriotic sentiments; that they might advance the cause of international peace; that they might accept that species of socialism which has been introduced among you and, having accepted it, support and spread it; and finally, that they might actively cooperate with civil authorities in defending what they describe as political and religious freedom.”

But the goals were others, for – the Pope stressed – “under an appearance of patriotism, which in reality is just a fraud, this association aims primarily at making Catholics gradually embrace the tenets of atheistic materialism, by which God Himself is denied and religious principles are rejected”, while the guise of defending peace is exploited to “spreads false rumors and accusations by which many of the clergy, including venerable bishops and even the Holy See itself, are said to promote schemes for earthly domination or to give ready and willing consent to exploitation of the people, as if they, with preconceived opinions, are acting with hostile intent against the Chinese nation.”

Pius XII noted that “the Association in reality aims at setting aside and neglecting the rights of the Church and effecting its complete subjection to civil authorities,” while “in order to spread these wicked principles more efficiently and to fix them in everyone’s mind, this Association – which, as We have said, boasts of its patriotism – uses a variety of means including violence and oppression, numerous lengthy publications, and group meetings and congresses”, which violate “the principal rights of the human person and trample on the sacred liberty of the sons of God” with the excuse of asking Catholics to commit for peace.

Pius XII said that those were “false and unjust premises” under which the Patriotic Association “confines within a narrow scope the supreme teaching authority of the Church, claiming that there are certain questions – such as those which concern social and economic matters – in which Catholics may ignore the teachings and the directives of this Apostolic See.

The Pope warned that “all this is completely at variance with the teachings and principles on which rests the right order of the society divinely instituted by Jesus Christ our Lord;” and he reiterated that it “pertains to the one Apostolic See to judge whether a person is fit for the dignity and burden of the episcopacy, and that complete freedom in the nomination of bishops is the right of the Roman Pontiff.” He added that even if “as happens at times, some persons or groups are permitted to participate in the selection of an episcopal candidate, this is lawful only if the Apostolic See has allowed it in express terms and in each particular case for clearly defined persons or groups, the conditions and circumstances being very plainly determined.”

Pius concludes, “bishops who have been neither named nor confirmed by the Apostolic See, but who, on the contrary, have been elected and consecrated in defiance of its express orders, enjoy no powers of teaching or of jurisdiction.”

This is still the issue at stake.

The second anniversary that helps us to look at the present through the lenses of the past is the 100th anniversary of Pope Benedict XV’s Letter to the Heads of Belligerent Peoples, issued in 1917, in the middle of the First World War.

This letter is where the Pope famously described the war as a “useless slaughter.” But there are many other issues in those one-and-one-half pages published on August 1, 1917.

Benedict XV asks rhetorically: “Must the civilized world be reduced to a field of death? And will Europe, so glorious and flourishing, run, almost overwhelmed by a universal craziness, toward a real suicide?”

This appeal to reason is followed by precise conditions for the belligerents. The current diplomatic line of the Holy See is reflected here.

Benedict asked above all that “the material strength of arms be replaced by the moral strength of love,” with a “just agreement between all parties to simultaneously and reciprocally reduce armaments following norms and warranties to be established, measured according the needs to preserve the public order.” This is a first step toward universal disarmament, which is the utopia of the social teaching of the Holy See. The appeal bears the awareness that a world with no arms is safer than a world with arms. The issue is so current that a Vatican conference to be held November 10-11 will address the issue.

Benedict XV then asks that an office be established to provide “arbitration as its highest peacemaking function.” This was a push for mediation, an activity for which the Holy See has always been in the frontline. Cardinal Pietro Parolin, Vatican Secretary of State, has also proposed an office for papal mediation within the Secretariat of State.

Then, Pope Benedict XV asks for “real freedom on the seas” as an opening to better international communication. This brings us to the idea of an appeal for a greater openness of international frontiers. “This would eliminate the many causes of the conflict and at the same time would open new sources of prosperity and progress.”

The Pope asked belligerent nations to limit war spending, counterbalancing it with the “immense benefits of disarmament,” and he noted that the agreements “cannot be achieved without the reciprocal return of the occupied territory.” So, the Pope asked Germany to withdraw from Belgium and France, pushed for an agreement between Italy, Austria, Germany and France over the “disputed territory,” to be carried out with a “conciliatory spirit” and in consideration of “what is just and possible.”

The Pope asked for a conciliatory spirit also in terms of other scenarios: Armenia, the Balkan States and Poland. Looking back in time, he did not get it wrong: Armenia was headed toward the “Big Evil” (the Armenian Genocide); Poland endured a territorial uncertainty that will bring Germany to invade Gdansk and thus initiate the Second World War; the Balkan States were the theater of a bloody civil war, and ethnic problems are still present there.

This is how, looking backward, we can discover the prophetic character of the Holy See’s diplomatic efforts, always able to look lucidly at global issues. This outlook is of help in understanding the current situation.