Why the year of Faith? Vatileaks. A second outcome, and waiting for the next trial

True, the Church is 200 years out of date. But not the way you may think. 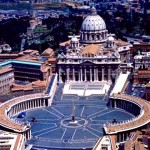 The Church is 200 hundred years out of date. Cardinal Carlo Maria Martini’s words in his last interview have travelled the world.  Interpretations multiplied.  In what, exactly, is the Church out of date? Is it because of the issue of communion and divorcees – even when the Pope wrote comprehensively about it as far back as in the seventies? Is it perhaps in the non-legitimization of gay marriages? Is it in her position on ethical and moral issues – what someone referred to as «the Church of nos»?

This is a rather sterile discussion, because it only looks at the practical aspects of the issues.  Actually, the Church is in fact out of date, but not because of those frequently mentioned considerations.  The Church is 200 years behind where it needs to be in order to build, in advance, structures and shape the intelligentsia allowing her to face future problems.

This year marks the fiftieth anniversary of the Second Vatican Council. We look back at a Church that understood, before the 1968 revolution came about, the need to step up to the challenges of the times.  The Church of the Council created brand new vocabularies and found a way to harmonize tradition (ultimately Faith, which tenets remain immutable) with the new times.  It is a revolution. But it is a gentle revolution – simply a change of perspective.  The decision to turn the altar and let the priest face the congregation while celebrating the Holy Mass is also a symbolic act: the priest faces the people because faith itself is directed towards the people.  A prophecy, more than a Council.

But the discourse that followed the Second Vatican Council was full of conflicting ideas.  The Church was so focused on itself that it was hardly aware of the new signs of the times.  This was a Church that seemed to lack in prophecy.

Recently, the Nobel Prize for medicine was awarded to the Japanese scientist Yamamaka.  He is working on the so-called «ethical stem cells», i.e. adult stem cells that he programs to «go back in time», enabling them to become a given organ, from a vast range of human body parts.  That news spread fast at the beginning, but then there was silence.  This denotes a Catholic world unable to advance its positions in the public arena.  Yamanaka’s research interests had been well known for a long time.  The Pontifical Academy for Life promoted discussions about this research.  But this «Catholic endorsement» took place within Catholic circles, often non-scientific circles.  This presented an image of Catholics favoring ideology over science.  Once that a Nobel prize had shown that there is no need to destroy embryos for research, the Catholic Church could have weight in to promote this finding, through her diplomatic and cultural means.  It does not.  Aside from some semi-official declaration, nothing is done at a diplomatic level, or even – more simply – at a communications level.  No one in the Holy See or Catholic newspapers use the occasion to, at the very least, make reference to prior Holy See international interventions to defend human life.

It is a missed opportunity. Just like with trans-humanism.  Trans-humanism touches on different areas of human life, including the military.  There are already projects to install electronic chips in soldiers, to enhance their human capacities through technology.  This is an issue of concern to the Holy See, which has discussed it in international congresses organized by Vatican dicasteries.  But the discussion has not reached a larger public.  There is a sort of gap between the top and the grassroots of the Church, a separation between academy and people.  This is the crisis of the Church.  This is what makes the Church 200 years out of date.

Almost unable to gain attention in the public square, unable to communicate because nobody thought about renovating the communication process, the Church’s image is that of an institution detached from reality.  In the past, parishes built communities.  Now they often don’t.  There has been a scarcity of priests able to «fill» vacancies in the parishes.  There are always fewer culturally learned priests.  All too often, the view is that a simple priest is all that is needed to head a parish.  But the role of a parish priest is one of the most delicate: he must transmit and have help faith and theology come alive in the community, while understanding and living within the community.

It is a problem that is evident at the highest echelons of the Catholic hierarchy.  As in the board of the Authority for Financial Information, tasked with monitoring Vatican finances.  The board is comprised by people coming from the Bank of Italy.   The former president of the IOR’s (the Vatican trust fund) Council of Superintendents, Ettore Gotti Tedeschi, came himself from «outside the Vatican».  Even the «anti money-laundering expert» hired by the Holy See, René Bruehlart, did not have prior Vatican experience or expertise.  Can «outsiders» – with more of a technical than a humanistic formation – who are not fully aware of the Vatican’s universe serve the biggest institution in the world? Will they be able to understand how important she is? Will they be able to contribute deep and far reaching insights?

Another example: when the problem of religious sects erupted in the world in the 70s,  Massimo Introvigne – a lawyer – decided to study the phenomenon.  He had the funds to do it, so he began collecting data and studying new religions and forms of worship.  He became one of the most prominent experts on the issue. Why did not anybody within the Catholic hierarchy thought about studying new religions, before Introvigne did?

There is another, clear problem: regularization.  Initiatives in the Catholic world, but outside any «official control» or endorsement, are regularized.  Just like it happened to Aid to the Church in Need (ACN).  Last year, ACN became a Pontifical Foundation.  It is a big honor, in recognition of the work done.  But it is also a boomerang, with ACN obliged to be politically correct in its the Report on Religious Freedom in the World.

In the end, there is one problem that can comprise all the others. The need to divulgate Catholic thought both internally and externally has been so undervalued that the rights to the Pope’s third book about Jesus of Nazareth have been given to Rizzoli, a non-Catholic publishing house, thus leaving out the whole Catholic publishing world.  The rationale for this choice is that Rizzoli would guarantee a better distribution.  But this seems like the Church surrendering to a sign of the times: the preeminence of the market over ideals.  Few understand Christian utopia.  A concession that confirms it will take the Church many years to re-organize sharing her message in publications and the media, since at the moment Catholic medias have scant impact on the public opinion. On one hand, there is this lack of impact on the public opinion. On the end, there is the lack on vision to make Catholic medias (not institutional Catholic ones) compete with “lay” medias.

The Church is 200 years out of date, not because it is not able to adjust its moral position, but because there are no successors to her brilliant minds of the past.  In part because the Church did not invest in forming a new generation.

This would be an interesting topic to discuss in the synod of bishops for the new evangelization.  A United  Nations document from the mid eighties mentions integral human development, a Christian/Catholic notion.  It was a time when international negotiations could be positively influenced by Catholicism.  Today, who will negotiate treaties? How will Catholic thought be represented?

Pope Paul VI was prophetic.  After the Second Vatican Council, he understood that a new profession of the Creed was needed. This same Pope wrote in the encyclical Populorum Progressio that the world suffers from a lack of thinking and reflection. Nowadays, even the Church suffers from her lack of thought.

One Response to True, the Church is 200 years out of date. But not the way you may think.