Pope Francis: The Next Challenges of the Pontificate Why a Third Section of the Secretariat of State? 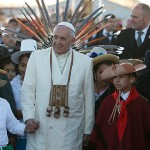 When Pope Francis speaks, he is pervaded by Latin America. He has that vision of a world seeking redemption. But it is also the vision of a world that needs emotion and concreteness. This fact can be glimpsed in another book recently out, a collection of four interviews with Pope Francis by Hernan Reyes Alcalde. The book is simply titled “Latino America”, and its focus is the Pope’s relation with Latin America. What Pope Francis really thinks can be understood when he speaks about his home land. Here are four main ideas.

The search for redemption

First of all, Pope Francis demonstrates a desire to redeem an overshadowed people that transforms itself into a will to redeem them. Methol Ferré, a philosopher and close friend of the Pope, said in 2005 that “it was not time for a Latin American pope.” That time has come. Pope Francis, for his part, admits that in 2005 there was no other choice for pope than Ratzinger. But he also maintains that now is the time to set the gaze farther.

“The Church”, Francis affirms in the preface, “has no first- or second-class regions. If anything, there are different cultural expressions. In some countries and local churches, she seems to have a certain awareness of superiority. However, looking back in history in concrete terms, one acknowledges that all of the expressions are lights.”

These words lead us to understand many things. First: Pope Francis’s rationale always to give more weight to local realities, by means of different tools: quoting the documents of the bishops’ conferences in his encyclical and documents; thinking about a greater devolution of some issues to the local churches; convoking frequent synods. Second: Pope Francis’s’ rationale in the choice of new cardinals. The cardinals often come from unknown places in the world, so that they can enrich the Church with their different points of view.

The 2007 Aparecida Conference is still a focal point for Pope Francis. The Pope underscores the two main features of the conference: that it was held at a shrine, and in a Marian shrine; and that Aparecida ended with a call for a continental mission. The Pope adds a footnote: “Aparecida’s chosen modus operandi was that of see, judge and act; however,” the Pope recalled, “there were differences around the ‘see’ part,” because some participants underscored that there could be no aseptic glances,” and so there was the proposal to specify further the meaning of seeing as “to see with disciples’ eyes, as it was later specified in the introduction.”

This need for discipleship is another topic developed during Pope Francis’s pontificate. As it has always been developed the push to be a Church “outward bound”, that is, “missionary.”

Since the beginning of this pontificate, Pope Francis has insisted a great deal on the need for a pastoral conversion. This rationale is part of the continental mission launched in Aparecida. “We are at the half-way point of the pastoral conversion,” the Pope said.

This conviction is probably responsible for the Pope’s insistent targeting of rigidity, spiritual worldliness and the terrorism of gossip: these are to him the knots that need to be untied in order to complete the path toward a full pastoral conversion.

Also some of Pope Francis’s governing acts seems to be part of this plan to block the pastoral conversion, in order to show that the service is just a service, and not a way to make up a career. Cardinal Gerhard Ludwig Mueller, Prefect of the Congregation for the Doctrine of the Faith, is left with no post after five years, and Cardinal Oscar Andrés Rodriguez Maradiaga, the Coordinator of the Council of Cardinals, said that the Pope wants people to serve in the Roman Curia for no more than ten years, and after this term to go back to their dioceses. Often, with no promotion.

Will this be the fate of Msgr. Guido Marini, Master of the Pontifical Ceremonies? His 10 years’ term expired in October, he already met the Pope in a private audience and it is rumored that he will soon be sent back to his home diocese of Genoa, perhaps as Rector of the Madonna della Guardia Shrine. Certainly, it seems unlikely – as another rumor said – that he will be appointed Secretary of the Congregation for the Divine Worship and elevated to the rank of Archbishop. Msgr. Diego Giovanni Ravelli, an Assistant Master of Ceremonies, could replace Msgr. Marini. But it is even possible Msgr. Marini will keep the post: he has worked brilliantly under Pope Francis.

In Pope Francis’s case, pastoral conversion is born from an awareness of the Latin American people. It is the consciousness of being a people, something different but not less dignified from other people, and to be what they are with pride. This awareness is one of the Aparecida’s outcomes. “It was one thing to commit to Latin America after the Medellin, Puebla or Santo Domingo Conferences. It is quite another thing to do so after Aparecida,” the Pope says.

Pope Francis then recalls the Aparecida document and highlights that “going toward peripheries also means going toward the peripheries of thought, to go and dialogue with the borders, to set a stage for discussion and not to be afraid to talk with someone who has a different way of seeing things.”

How does he open processes? For example, with synods. Synods are open processes, just as the Apostolic Exhortation Amoris Laetitia is. Just as Curia reform is an open process: just as the third section of the State Secretariat, established with a letter sent to Cardinal Pietro Parolin, but not officially announced nor included by means of a motu proprio into the Apostolic Constitution, Pastor Bonus.

Processes are also open where bigger issues are concerned. A new relationship with China never seemed as close as it does now, since the agreement with the government on the appointment of bishops seemed to be ready. But such is not the case, not because of the fierce opposition of people like Cardinal Joseph Zen or even Archbishop Savio Hon, the former Secretary of the Congregation for the Evangelization of Peoples, who was now sent as nuncio to Greece. The dialogue with China is a process that is kept open, and Pope Francis is always willing to drop something, because – as he always says – we cannot stop on account of the notion that “things have always been done like that.” The reasons why things were done in a specific way before are not mentioned, because in the Pope’s view it is more important to open processes.

Other open processes of the pontificate include the dialogue with the Russian Orthodox Church. The Pope met Patriarch Kirill, and it was the first time in history a Pope and the Moscow Patriarch met. To Pope Francis it did not matter that the final declaration, negotiated between the Pontifical Council for the Promotion of Christian Unity and the Moscow Patriarchate, was a little bit unbalanced in favor of the Orthodox side. It seems that the Pope was warned about that, and it seems that the Pope said it was not important, because it was more important to have the meeting. And this is the reason he wanted to free the declaration from any political connotation, by labeling it as “pastoral.”

Other processes were opened with Sunni Islam. Pope Francis reopened relations with the Sunni institution al-Azhar, whose Grand Imam Ahmed al Tayeb met Pope Francis for the third time last week. Even in the case of the al Azhar dialogue, it is not important how controversial al-Azhar has been, or how many problems can still arise during the clean-up process. “Our meeting is the message,” the Pope said to the Grand Imam when the latter first visited the Pope in the Vatican.

These are just some of many examples. The need to open processes is in fact the inner need of a Church that wants to go forward and to throw off a colonial past.

Everything leads to a central notion in Pope Francis’s philosophy, and it is the most Latin American one: the notion of pueblo, people. The Pope is so attached to the “philosphy of the people” that he also followed it up with the “theology of the people,” which is dense with popular piety.

The pueblo – the Pope explains in the book – “needs the myth to be understood. It cannot be explained in a logical way. It is a common identity of a social and cultural legacy. It is not automatic; it is the result of a long and difficult process.”

Pope Francis also wants to explain the differences between the Latin American and European populism, as in Europe the word populism “has a different meaning.” For this reason – he says – we should distinguish the adjective populist from the adjective “popular.” “Popular is” – the Pope says – “whatever tries to interpret the feeling of people, its trends, its culture,” and this “has nothing wrong in it,” but it can be instead the basis of a transforming and lasting project.

Pope Francis noted that the term populism is “sometimes referred to the need to interpret and give an end to popular sentiment,” thus acquiring “a negative connotation when it expresses the ability of some to manipulate politically the culture of people for the sake of their own power.”

For this reason, Pope Francis spoke in Evangelii Gaudium of a “responsible populism,” that should not look to social plans as definitive responses, because “the defense of the weakest is not irresponsible populism”, and because “without defending those who are excluded from the system” we generate “an unjust system, ignoring the immense dignity of every human being.” However, the Pope warns, no dichotomy must exist between “popular and republican, democracy and aspiration: both of these issues are needed in the future.”

Beyond any rhetorical statement, that of the people is one of Pope Francis’s main themes, and Latin American populism is one of the main keys to interpret the Pope. This attention on people becomes crucial in some choices: from Pope Francis’s preference for bishops who are less cultural warriors and more shepherds, to the need to show an iron hand against scandal, even when the scandals are just a reflection of the omnipresence of the media.

The notion of pueblo can be noted when the Pope speaks about hope. “Latin American hope – he stresses – has some names: fraternity, social justice, acknowledgement of the dignity of each person, son of the American land, son of God.”

These four orientations are fundamental for interpreting Pope Francis. Nothing can be seen the same way in the Vatican, which is so linked to a history and a tradition that developed over millennia. Neither the appointments, the personal choices, nor the way the Pope manages the church: nothing can be read according to former models or methods. With Pope Francis, everything is brand new, with a gaze set on the pueblo, a gaze set on mission, a gaze set on Aparecida and a gaze set on the redemption of a people once colonized.