From Benedict to Francis. One year after, the same problems Pope Francis on the path of reforms

Vatican, a crucial week for reforms. With an eye on finances 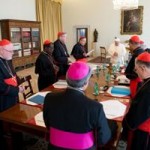 The clock starts today for a very important week for the reform of the Church. The Council of Cardinals will begin its three-day meeting today. After that, informal meetings, until February 20 and 21, when the cardinals will gather in an ordinary public consistory. On Saturday, February 22 there will be a consistory for the creation of 19 new cardinals (3 of them without the right to vote in a conclave, since they have already turned 80). The week ends with the Council of the Synod of Bishops, which will also discuss its own reform. During this week Pope Francis will be hearing everybody out, as he customarily does. It is to be seen how he will then act.

There is an «end of the world» feeling in the Vatican corridors. This is also because, when speaking about reforms, financial issues are crucial. And several discussions on Vatican finances have taken place in recent days.

The Institute for Religious Works (IOR) Council of Superintendancy, i.e. its board of directors, met February 12. The day after, February 13, Cardinal Raffaele Farina gave Pope Francis the conclusions of the Pontifical Commission of Reference on the IOR, which Cardinal Raffaele Farina chairs. Right after the creation of the new cardinals, on February 24 and 25, the so-called Council of Fifteen (the 15 prelates dealing with the Holy See’s economic and administrative issues) will hold its periodic meeting, too.

In the meantime, the external consultants keep on working inside the Vatican, annoying some. Price Waterhouse Cooper and Deloitte are the most recent addition: they has been hired to look at the management of the hospitals Bambino Gesù in Rome and Casa Sollievo della Sofferenza in San Giovanni Rotondo, which are both under the administration of the Secretariat of State.

Meanwhile, Ernst & Young and McKinsey are still walking up and down the Vatican corridors, and, it seems, they have began to work together with the Pontifical Commission of Reference for the organization  of the economic-administrative structure of the Holy See, chaired by the maltese Joseph F. X. Zahra. Francesca Immacolata Chaouqui is acting as a trait d’union between this commission and the external consultants, as she is a member of the commission and at the same time an employee of Ernst & Young.

The Promontory Financial Group continues to screen the IOR accounts (the screening was supposed to have finished in December) and the accounts of the Administration of the Patrimony of the Apostolic See (APSA). The APSA accounts are just 28, actually, and they are going to be closed out in order to make the APSA truly a public authority, as mentioned in the July 2012 Council of Europe’s MONEYVAL committee report.

Signals and rumors point to a certain change of course in the Holy See. The Secretariat of State seems to be taking back control, following a period in which the new Secretary of State, Monsignor Pietro Parolin, was away for a month due to a mysterious illness.

That the Secretariat of the State reasserts control is natural. Notwithstanding the criticism of a perceived “Roman centralism”, there is the need for a coordinating body for the universal Chuch. Pastor Bonus (the Pastoral Constitution, also to be reformed, that regulates the functions of the Roman Curia) conceives the Secretariat of State as a tool at the service of the Church. Diplomacy, as well as relations with the local Churches, are handled in the Secretariat of State. Yes, everyone’s independece must be respected, and the local Churches’ concerns must be taken into account. But if there is no central government, there is the risk of a descent into chaos.

The Secretary of State –and Cardinal-designated– Pietro Parolin seems to be aware of this risk. Parolin granted a long interview to the Italian Bishops’ Conference newspaper “Avvenire” on February 9, and his words offer many insights on what is to come.

For instance: when Monsignor Parolin is asked about the commissions, he refers specifically to the two advisory commissions, stating that they have a limited mandate. He does not mention the external consultants recently hired by the Vatican. And when asked about relations between the Italian Bishops’ Conference and Italian political institutions (implicitly a reference to a past split on the issue between the Secretariat of State and the Italian Bishops’ Conference), he underscores what the Pope said to the general assembly of the Italian bishops («dealing with politics, and relations with political institutions, are things for yours to handle») but he then stresses the need for “sinergies”, advocating the role of the Secretariat of State in coordinating institutional dialogue.

Monsignor Parolin also spoke about the Secretariat of State as a “model” for other parts of the Curia in putting into effect the pastoral reform Pope Francis wishes.

These topics will be part of the discussion at the Council of Cardinals that started today. Some of the eight cardinals have shared with their inner circles that they are disappointed about the increasing recourse to external consultants. The cardinals agree that corruption must be fought and expenses must be rationalized, but at the same time they think that the work that the Church has already done in these areas should be taken into account.

There are plenty of Catholic universities and Catholic institutions forming professionals highly sought for their skills. Thus, the cardinals question the need to resort to experts outside the Catholic Church.

The general idea is that, rather than hiring an outside firm that spends a few weeks in the Vatican and then leaves, taking with it what it has learned, the Holy See should hire independent experts from within the ranks of the Vatican, so that they can share their expertise within the Leonine City, avoiding any conflict of interests for positions they occupy outside the Vatican.

This is the reason why the coming discussions will also focus on the need of forming and raising a new generation of Vatican government officials. The Pope wants it modeled on the “old Curia.” It does not necessarily mean a return of the men of the Curia of the old days, because the times have changed.

The process of internationalization of the Roman Curia and of the College of Cardinals began under Pius XII. This internationalization and a new consciousness of the global role of the Church developed after the Second Vatican Council, and resulted in the Holy See acting ever more internationally, and increasingly moved away from defining itself in terms of a privileged relationship with her neighbor, Italy.

Parolin seemingly underscored the novel Vatican international positioning in a speech he gave at a ceremony marking the 30th anniversary of the review of the Agreement between Italy and the Holy See.

The agreement recognized the Holy See as a juridical person, granted immunities, and recognized a territory to Vatican City State. The Holy See needed to guarantee for itself some indepence, and this is the reason why it signed the agreement with the then fascist government.

The review of the Agreement – Monsignor Parolin explained – went beyond the need of the Church to secure for itself spaces of freedom separate from the totalitarian Italian State. The review of the agreement outlined a collaboration with the new, democratic Italian State for the pursuit of the common good.

This mentality de facto changed the privileged relationship the Holy See had with Italy. Since the review of the Agreement on, the Holy See has acted ever more as a global actor, and increasingly moved away from the preferential relations it could have with Italian politicians, also because of the dissolution of the Italian Catholic party “Democrazia Cristiana”.

Under Benedict XVI’s pontificate, the last traces of the preferential relations with Italy approach were replaced by an institutional and multilateral vision, which elevated the profile of the Holy See as a State and gained the Holy See European recognition. The champions of the special rapport with Italy reacted, especially with respect to financial issues.

Nowadays, the discussion about an excessive internationalization of the Holy See is fashionable again. Rumors have it that the new president of the IOR board of directors will be the Italian Carlo Salvatore, a banker that would replace Ernst von Freyberg.  The IOR could become an ethic (socially committed) bank. Would the IOR change to become a bank help to support Holy See sovereignty? Would it allow the IOR to carry on its mission, which is to deliver funds to missions and works of religion? Or would the change of the IOR into an ethic bank be driven only by the logic to earn more profits, a logic that external consultants have championed?

In the meantime, Pope Francis has given the first signals of institutionalization, and his revolution is shaping in a new way. As Parolin said in the interview to “Avvenire”, there are many saints in the Curia. Pope Francis’ biggest challenge is to find a balance between the institutional memory and the renewal of the institution. The most important reforms (most crucially, the financial reform) have been carried forward by people of the Curia.   Often, when external consultants were tasked with proposing reforms, they failed to understand the Holy See point of view and peculiarity.

The skills of the men of the Curia must not be lost. It must be valued. In my modest opinion, this is the Pope’s most difficult task.

2 Responses to Vatican, a crucial week for reforms. With an eye on finances