Pope Francis’ Outward-Looking Church, beyond the Italian exception What if Pope Francis surprises us once more? 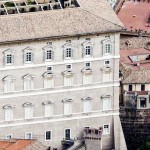 The members of the board of the Financial Information Authority (AIF), the Vatican’s financial watchdog, hailed all from Italy. Taking a decision which shows his wish to give the Holy See an international profile, Pope Francis replaced them all with international experts held in high regard. Among them, there is just one Italian, a woman. Pope Francis is really going beyond the Italian default model (i.e., using Italy as an exceptionally appropriate model for all things Vatican).

And he is doing it stepping on and continuing the path initiated by Benedict XVI. Since the Holy See committed to the path to financial transparency, the pace has been sometimes slowed down. The first anti-money laundering law, drafted by Marcello Condemi – one of the former members of the AIF’s board – had been almost completely a copy of the Italian anti-money laundering law — which itself had not been positively assessed by international bodies. The reform of the law, solicited by the Council of Europe MONEYVAL committee, put the Holy See on the right track.

Since the 25 January 2012 reform of the law, the Holy See’s path toward financial transparency has been ever more geared toward an international framework, beyond the possible “good neighbors” relations  that could have been established with any given country.

In December 2012, two modifications to the Vatican anti-money laundering law permitted the AIF to sign memoranda of understanding with its counterparts without the requirement of a “nihil obstat” from the Secretariat of State. Later, the reform of the Vatican penal code, the 8 August 2013 Motu Proprio issued by Pope Francis which became law on 8 October 2013, delineated a specific Vatican financial system with a Committee for Financial Security, and entrusted the AIF with prudential supervision. In November 2013, the Statute of the authority was reformed, its powers strengthened: an office for prudential supervision was established, the tasks of the board were clearly delineated, and the board was described as a body that sets the strategic goals for the Authority.

After the appointment of Bishop Giorgio Corbellini as ad interim president of the Authority, a change in the membership of the Council was natural, in order to give the board the required international profile.

Corbellini replaced Cardinal Attilio Nicora, the ‘creator’ and head of the Financial Information Authority since it was established. Nicora resigned due to age limits.  Earlier, he had been obliged to leave the post of President of the Administration of the Patrimony of the Holy See, because it was incompatible with the post of director of the financial watchdog. Nicora’s conflict of interest had been noted in the July 2012 MONEYVAL report, even if not by name.

Giuseppe Dalla Torre was also in a potential conflict of interests situation, because he was both a member of the AIF board and President of the Vatican Court: the AIF submits to the Vatican general prosecutor cases of suspect transactions for further investigation.

Other members of the board were Marcello Condemi, one of the drafters of the first Vatican anti-money-laundering law; Cesare Testa; Claudio Bianchi; and Francesco De Pasquale, a law expert who had been director of the authority until he was elevated to the rank of member of the board when René Bruelhart took over the post of director.

The former AIF board is replaced by four high profile international experts.  They are:

Marc Odendall, a financial consultant in the philanthropic sector, from Switzerland. He is in the board of the Caritas in Veritate Foundation, chaired by Archbishop Silvano Maria Tommasi, the Holy See Permanent Observer to the UN Office in Geneva. The Foundation engages the United Nations to elevate the international profile to issues of concern to Catholics. Odenall worked for JP Morgan during the 80s and for Merrill Lynch in the nineties. He is married and is the father of four children.

Juan Zarate, senior advisor at the Center for Strategic and International Studies and Harvard professor of law. He was George W. Bush advisor for combating terrorism. He worked as U.S. Assistant Secretary of the Treasury for Terrorist Financing and Financial Crimes, combating the financing of terrorism, and he is an expert in combatting money laundering. He led the hunt for Saddam Hussein’s assets, recovering more than 3 billion dollars. He studied at the Catholic School Mater Dei in Santa Ana (California), where he grew up. He has been inducted in his school’s Hall of Fame.

The only Italian member of the new AIF board is Bianca Maria Farina, managing director of the Italian insurance companies Poste Vita and Poste Assicurazioni. She has always worked in the financial and insurance sector, where she has held important positions. She was part of the privatization of the Italian public insurance company INA Assitalia. After just a few years, she positioned Poste Vita as a leading company in the savings and social security sector in Italy. She is also vice-president of the National Association for Insurance Companies, a member of the Board of Directors of the Federation of Banks, and an advisor to «Save the Children».

In addition to the new board, the new position of Deputy Director of the AIF has also been filled. The post was inserted in the new AIF statute, to assist the director in controlling the AIF operational activity. The Secretary of State – who controls the appointment – chose Tommaso Di Ruzza, confirming the new international focus of the Holy See. Graduated in Law by the University of Siena and specialized in International Law at Oxford (UK), Di Ruzza has been a legal officer of the Holy See since 2005 and, since 2011, in charge of the AIF’s juridical and international issues. He is among the main drafters of the Holy See enhancements on financial matters to adhere to international standards. He oversaw some of the negotiations regarding MONEYVAL and the Egmont group (a forum which brings together the financial information units of many countries).

Six new memoranda of understanding have been announced just two days after the appointment of the new AIF board, confirming the Holy See’s international vocation. In Lima, while taking part to the plenary meeting of the Egmont Group, the Financial Information Authority signed memoranda of understanding with the UK, France, Malta, Peru, Poland and Romania. The new memoranda are in addition to the twenty-some previously signed, the most important being those with the U.S., Germany and Italy counterparts.

Now, the framework for the Vatican’s Financial Information Authority international cooperation is broader, involving other key countries in financial matters, like the UK and France.