Pope Francis: His ‘Pueblo’, His Church Pope Francis, a change in mentality?

Vatican Financial Reform: What Are the Issues at Stake? 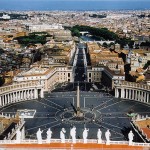 News of the suspension of the agreement with Price Waterhouse Cooper (= PwC) for the external auditing of Vatican accounts came out like an earthquake to strike the idyllic picture of Pope Francis’ reforms. The hiring of the international firm as external auditor was announced December 5, 2015 from Cardinal George Pell, Prefect of the Secretariat for the Economy. However, the reasons for the suspension should not be interpreted narrowly as part of a battle between the Italian bureaucracy and Cardinal Pell’s reformist intentions. For the most part, the news and the decisions behind it are part of a larger political struggle within the Vatican.

First of all, we should see this news for what it is. PwC is one of the most important international auditing firms. The hiring of an external auditor, after the appointment of the Vatican auditor general, marked one further step toward the fuller transparency of the Holy See. Balance sheets must be audited, drafted according to international accountability standards, undergo the audit of the auditor general and pass the examination by the external auditor.

The real issue is that before arriving at an external audit, the internal audit must be carried out properly. Libero Milone, appointed June 15, 2015 as Vatican Auditor General, is working on it. Pope Francis received him on April 1 in order to show a certain interest in the financial issues and to remind the Auditor General to be accountable to the institution. Dicasterial balance sheets must be completed and adaptation to the new accountability standard is a difficult step for the various dicasterial offices.

On the other hand, during a transition, the external auditor is a help and a stimulus, since the internal auditor might take steps that do not perfectly comply with international standards. It is a way of mutual assistance.

The Vatican is a family-like world; dicasteries have small balance sheets, and each of those used to be managed in their own way. There was already an auditor general, as well as an external auditor, and the Prefecture for the Economic Affairs – especially after the 2012 reform – oversaw everything. Balance sheets were also drafted differently between dicasteries. Some items were not even contemplated by the Holy See’s consolidated balance sheet. This is proven by the last consolidated balance sheet. It is noteworthy that the Holy See and Vatican City State have two distinct balance sheets. But the administration of Vatican City State generates the revenues, thanks especially to the profits of the Vatican Museums.

Despite the fact that the Holy See Press Office did not clarify the issue (nor even confirm the suspension), some details of the PwC hiring must be clarified. These include: how was the balance sheet supposed to be audited; to which information would the external auditor have access; will the Holy See and Vatican City State balance sheets be combined into one?

However, the hiring – according to sources – was unanimously approved by the Council for the Economy. Hence, as it was presented, the suspension seemed to be more a bureaucratic act, a way to slow down the reform process.

This interpretation can be substantiated by a glance at the media reports. They insist that the contract described Cardinal Pell as the “Manager of the Vatican”; or that there was an error of procedure, because the Council for the Economy is in charge of hiring an external auditor (which in fact happened). Then, Archbishop Angelo Becciu, Deputy of the Secretariat of State, explained to the Italian Bishops Conference television service that “the contract is suspended, not rescinded” – in order to show that there is no wish to backtrack on the path to transparency – and he underscored that the contract was not signed by the competent body, which – according to him – would be the Council of Cardinals.

These data are noteworthy. The Council of Cardinals is called to assist and counsel the Pope, but is not in charge of signing any contract or performing administrative acts. The discussion on curial reform will not produce any act of government: all the proposals go to Pope Francis’ desk, and he makes the final decision.

This is the reason why Cardinal Pietro Parolin, Secretary of State, asks for a papal rescript or letter any time he has to make a decision.  For this same reason Parolin even sought and received a letter from the Pope stressing that during the transition toward curial reform there is no “vacatio legis” (vacancy of power), and that in the meantime it will be business as usual. This means that the Curia will continue to be governed with the usual centrality of the Secretariat of State, which also kept control over the Holy See Press Office’s daily bulletins in spite of the fact that the Press Office is now under the management of the Secretariat for Communications.

An on-going dialogue between the Secretariat of State and Secretariat for the Economy should be acknowledged. However, the real decision-making is handled by mid-ranking officials of each dicastery. We should look to these officials to understand how things are developing. It is in the middle ranks that the “Hidden Vatican” can be found working tirelessly for the good of the Church. In the middle ranks you also find those who have personal interests in a mechanism that Pope Benedict XVI had already established in order to work for financial transparency and against corruption.

The struggle is not, in the end, about an “Italian bureaucracy” that is resisting Cardinal Pell’s efforts in favor of transparency. The struggle is played out on multiple levels, and the Italian issue occurs only at one level, one which, in the end, does not imply a great deal in terms of Church governance.

The Holy See and Italy always had privileged relations, because of geographic proximity, of the fact that within the Roman Curia the working language is Italian, of the fact Vatican City State is bordered by Italy. Some individuals took advantage of these privileged relations, especially in financial matters. The Reuters story about the APSA account that the Italian banker Nattino allegedly used for insider trading is revealing.

However, as mentioned above, the Holy See’s path toward financial transparency brought it to break ties with Italy. After the reform of Vatican finances started by Pope Benedict XVI, the Holy See’s borders were not with Italy anymore, but with Europe. The continual updates and adjustments of the anti-money laundering law and of the Vatican financial system in general brought the Holy See to tailor its own financial system in a manner fitted to the Holy See’s particular mission and at the same time compliant with the international standards. The new system in force is now very different from the first anti-money laundering law initially adopted by the Vatican, one modeled on the Italian law. Pope Benedict’s courage can be also measured in his commitment to quit this Italian-Vatican privileged relation.

The reaction to this “break up” can be seen in the two Vatileaks trials, but also in many leaks about Vatican finances published in newspapers. These leaks often provide matter for imprecise reports. But these reports were also the sting that brought the cardinals at the 2013 pre-conclave meeting to ask for a major commitment to transparency by the Holy See.

However, the importance of the Holy See’s state sovereignty is underestimated among cardinals, too. The Holy See’s sovereignty is not merely formal: it is substantial. This is the reason why the Holy See cannot be managed as if it were a business corporation. Balance sheets must be transparent, but we are always talking about the financial books of a State.

When Cardinal Pell assumed the post of Prefect of the Secretariat for the Economy he advocated strongly on behalf of standardized, transparent and regular balance sheets. In some cases, he worked like a manager. This left space for attacks by those who wanted to keep their power, or who wanted to maintain their network of interests. There are still mistakes, but the Holy See/Vatican system is considered among the most compliant by the Council of Europe’s committee Moneyval, whose report swept away the notion of Vatican finances as a privileged place for illicit dealings.

In the end, the attacks are not formally  motivated by opposition to the process toward Vatican transparency. They are anyway against Cardinal Pell and the way he handles things, and they would be anyone at the Cardinal’s place.

It is noteworthy that these attacks take always place on the eve of one of Cardinal Pell’s regularly scheduled private audiences with Pope Francis. Despite the fact that the audiences are scheduled far in advance, the media lead people to think that Cardinal Pell has been called in on the carpet on account of these attacks, and not for an update meeting that the Pope regularly holds with Curia members.

For these reasons, Cardinal Pell must be cautious in his reforms. He cannot make missteps, because he will receive no mercy. None of the old powers of the Curia wants to lose any influence. Instead, they want to maintain or regain it. The notion that the procedures are deficient, or even that sovereignty is being undermined (a wide discussion took place over whether to audit externally the Vatican City State administration books) will always be used in order to undermine the work of the new Vatican financial dicastery.

In the end, this is not merely resistance from the old Italian bureaucracy, but instead it is a struggle advanced through bureaucratic tools. It is not a struggle between an Italian and Anglo-Saxon mentality either. When the issue is put in these terms, the wider issues are ignored, and the Vatican is presented as a place that the Anglo-Saxon mentality must conquer over against the bad boys of the Italian bureaucracy.

In the end, the news of the suspension of PwC contract is part of a struggle of powers that has stalled Pope Francis reforms, and is even leading to serious doubt whether there is any reform going on. Phil Lawler from Catholic Culture noted an increase recently in the number of articles talking about Pope Benedict XVI as the great reformer. All along this blog has repeatedly discussed Pope Benedict’s reforming efforts and achievements, even when they were underestimated by almost everyone. Benedict’s work supplied the roots that are now helping the Holy See to continue working on and carrying forward a reform despite the struggles.

The PwC suspension just means that the internal work is not concluded. It is a complicated work because it requires a change in mentality. The Vatican has been working on this for a great deal of time. And it will keep on doing so, despite the struggle over power, the naivety of some cardinals and the cunning of others.