Synod of bishops, the search for parish priests Pope Francis starts reforms. But perhaps he will need to rely on St. Peter’s Pence

Vatican, suspended between the search for a vision and a gang war 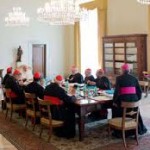 Decisions are yet to be announced, and they will be this week. But the amount of gossips, rumors, even the leaks anticipating the data of the balance sheet of the Institute for Religious Works (the so called “Vatican bank”) show that there had been a war behind these decisions. The roots of this war are in old stories. The same old stories that brought the Vatileaks scandal. That initially supported Pope Francis’ election. Those in these old stories, now that Pope Francis is carrying forward the work started by Benedict XVI, are playing their last hand. Perhaps, this is the gang war that Pope Francis has been trying to prevent when he had warned repeatedly about the perils of gossiping, asking all to repudiate it.

Pope Francis’ words were not enough. The Council of Cardinals met July 1-4. The Secretary of State, Cardinal Pietro Parolin, joined this group of 8 appointed by Pope Francis. The Pope – according to Father Federico Lombardi, director of the Holy See Press Office – told Cardinal Parolin that he is a full member of the Council. However, no document has been issued yet to certify the Secretary of State’s membership in the group. In the meantime, Cardinal Parolin is trying to keep his position via his being present.

This ‘four secretariats’ structure is just a hypothesis, since the fifth meeting of cardinals have not produced a draft for Curia reform. Widely discussed is the streamlining of the Curia (bringing the Pontifical Council for Laity and Family together; Justice and Peace with Cor Unum and Migrants; and the Congregation for the Divine Worship with that for the Cause of Saints). Also in this case, we are dealing with hypotheses. Pope Francis went back in part to the old draft for a Curia reform written by Cardinal Attilio Nicora shortly before John Paul II’s death. The draft proposed the establishment of a Council of Cardinals, and a brutal amalgamation of dicasteries. The Council of Cardinals was intended to consolidate positions that had crystallized under the administration of the Secretary of State, Cardinal Angelo Sodano, who had his (mostly Italian) interests to maintain. Nicora’s draft was in fact a way to protect this power.

Pope Francis went beyond Nicora’s draft. Angelo Sodano had managed the pre-conclave meetings in a way that led cardinals to speak of management, more than of the substantial issues. The search for a missionary Pope, able to speak to the people, seemed to be a natural consequence. The Pope acts as a front man, while the Roman Curia manages its re-organization, dismantling piece by piece the reform of collegiality carried on by Benedict XVI. Pope Francis noted there was a wish for discussion, the same kind of discussion he was accustomed to, from the Jesuits’ General Congregations. In the end, the Superior General there makes the decision. But during the Congregations, everybody can voice concerns.

This is the spirit that Pope Francis has brought into his pontificate. The notion of a permanent Council, of ongoing talks, can however bring about some surprises. So, the Curia of the old days, after many of his main characters took important posts, had to face some surprises. Especially on the economic side.

For what concerns the economy, Pope Francis has continued, with no rush, Benedict  XVI’s work. The Vatican’s Financial Intelligence Authority strengthened its international profile and issued new statutes. The Vatican first amanded its first anti-money laundering law, and then – under Pope Francis – changed it with a brand new one, which positioned the Holy See among the most advanced countries in the world in this regard. This could not have happened without the enormous effort carried out by Vatican officials.

In the media, this is portrayed as a “gang fight”. In fact, what the in the media has become a petty war among gangs, is a fight between two opposite visions. And every mean is licit, in the midst of this war. Also passing to journalists rumors and gossips, sometimes even mischaracterizing reality to prove a thesis.

For what concerns the Institute for Religious Works, the internal line has prevailed. The institute is a resource for the Catholic Church and her mission, and it cannot be abolished. There will not be revolutionary changes. Just an updating, to better insert the institute (whose chirograph and statutes stretch back to 1990) in the international arena.

This issue brings about a debate. The Curia of the old days is tied hand in glove to Italy. And Italy more than once has used the IOR as a scapegoat.  Italy views the Vatican as a subdivision that should manage every international relationship on the basis of its trusted relations with Italy.

This vision contrasts with the international vision, people aiming for the Holy See to be present in the world and able to send money to missions through her own international sovereign channels provided by the IOR.

Among those who support this second vision, there are some who are supporting a more speculative IOR, in order to generate more profits, and to have the IOR fully join the international banking system. On the other hand, there are people who wish the IOR to keep its characteristics of a sovereign institute, with funds at the Pope’s disposal.

Hence, the story of the territorial factions. They are referred to as “The Americans,” “The Germans,” “The Maltese,” and a power struggle ensues. Reality is far more nuanced. The Council of Superintendency of the Institute backed and supported the international turnaround and upholding sovereignty. It also favored the process of reform within the Institute, and making the IOR in some small ways a bank, even (perhaps) giving it the possibility of lending money. An approach that, it seems, was taken at the request of the Pontifical Commission for the IOR, chaired by Cardinal Raffaele Farina.

The process of reform has almost come to an end. The members of the board will probably tender their resignations, in order to support and facilitate a generational change. The Secretariat for Economy should take the lead of the management of the assets, to be entrusted to another body, the Vatican Asset Management. Surely, the president will change: Ernst von Freyberg has accomplished his tasks.  He operated as a full-time president although he was not one under the statutes.  Now that the statutes foresee having one, the job will not go to him.

Who might be von Freyberg’s successor? Two names are often mentioned: that of Jean Baptiste de Franssu, and that of Francis X. Zahra. They are both members of the Council for the Economy, they were both part of the (now dissolved) Pontifical Commission of Reference on the Economic-Administrative Structure of the Holy See, and they both were – according to unconfirmed rumors – in the set of three names that the Spencer&Stuart head-hunting agency had given to the Secretariat of State when the latter was searching for someone to replace Gotti Tedeschi as president of the council of the IOR, who got a no confidence vote by his own council.

These names would represent a line of renewal within continuity, but at the same time they would not act as the hawks, the latter aiming of making the IOR a speculative reality, as they would like to do with many other realities. For example, the widely gossiped commission for communications  would also be tasked with reviewing the Vatican Television Centre statutes, to make it a more commercial and profitable activity.

Paradoxically, it is the leftist-leaning world of pro-internal democracy that is pushing the Vatican towards a capitalistic pivot.  The democrats are very much to the left and very sympathetic to the Pope, so much so that they stand behind the Papal shield when necessary. They praise Pope Francis’ words on poverty, but they also ask the Church to revise her moral teaching.

These contrasting tendencies will came out, for example, in the next discussion on the Non Proliferation Treaty, the first important test for the new Holy See Permanent Observer to the United Nations Bernardito Auza. Archbishop Auza will have to act as a mediator between the prudent position of those who are against nuclear weapons, but do want to ban nuclear energy, because “it has civil implications to be considered”; and those who, even within the Vatican, back the extremist line, that of a total ban on anything nuclear, a choice that would place the Holy See on one side of the negotiations process instead of as a facilitator.

The sovereignty of the Holy See is always at stake. It was so when the Administration for the Patrimony of the Apostolic See (APSA) issued its new statutes, which made its consultants into members of the advisory board, de facto showing that APSA was acting as a bank even when it was referred to as a Central Body of the Vatican City State. This reform could be swept away if the Secretariat for the Economy’s intentions to dissolve APSA become a reality: the tasks of the ordinary section would be taken by the Secretariat for the Economy; while APSA’s extraordinary section would instead be under the responsibility and control of the Council for the Economy.

All of these issues are portrayed by the media as a gang war. Perhaps, there is just a major issue. What seems to be missing is a central vision, which is never made concrete, with processes becoming, instead, ideas on urgent reforms that are not translated into action. In the meantime, Vatican officials are passionately working, trying to keep the Holy See a modern State, yet preserving its peculiarities.

While cardinals are counseled by many voices (some of them are lobbyists), Pope Francis is still speaking about missionarity.

And the Legionaries of Christ never pushed missionarity aside. Stricken by the scandal of their founder, they have initiated, with great sacrifice, a path to renewal that led them to the election of a new government and the drafting of new constitutions. These constitutions have been examined by an ad-hoc commission. The pontifical advisor, Father Gianfranco Ghirlanda, has taken part in the process of renewal since the very beginning.

3 Responses to Vatican, suspended between the search for a vision and a gang war