Pope Francis and the role of the press Pope Francis, a new model for Vatican communication?

What can Pope Francis learn from Eastern Churches? 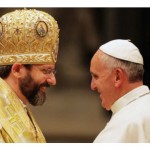 The meeting of Pope Francis and the Synod and metropolitan bishops of the Ukrainian Greek Catholic Church has been labeled as “a new methodology” in the final release by the Holy See Press Office.

Speaking with ACI Stampa, Major Archbishop Sviatoslav Shevchuk, head of the UGCC, underscored that this new methodology consisted in the meeting with all the representatives of the Church together. This way, Pope Francis could see that “some of my declarations in the past were not personal opinion, but an actual expression of the communion of our Church.”

It is possible that the Pope will summon other Churches Sui iuris (that is, granted with their jurisdiction and administration, though under Rome) for a meeting on some particular issues. On the other hand, it seems that this kind of meeting will take place only regarding some peculiar situations.

Pope Francis already attempted to apply this new methodology to ad limina visits, that are the visits that Bishops conferences pay to the see of Peter every five years. During the ad limina, the bishops have a meeting with the Pope and a series of meetings in Vatican dicasteries.

Before, there was a general meeting with a speech, and then the Pope met every bishop singularly. Pope Francis changed the procedure: he meets all the bishops together, he delivers no statements, and there is a Q&A.

In some occasions, Pope Francis added an inter-dicasterial meeting with the bishops: he presided over a meeting between the bishops and some of the dicasteries interested in critical issues. It was an addition to the program that took place only in some occasions.

Given this precedent, Pope Francis will likely use the same methodology summoning all the Sui iuris Churches. However, it also likely that these meetings will take place only on special occasions.

However, significant involvement in dialogue with Sui iuris Churches could provide Pope Francis some fresh point of view on Synodality.

Meeting the Ukrainian Greek Catholic Church, Pope Francis said that it is not enough to have a Synod; it is important to “be synod.”

The notion of Synodality is one of the most used in this pontificate. Speaking with the Italian bishops at the opening of their 2019 general assembly, Pope Francis also addressed the issue of a possible national Synod, that must come from the bottom and the above.

Even the Curia reform is intended to develop major synodality, that is increased communication with the local Churches. The draft of the Praedicate Evangelium, the apostolic constitution that will reform the Curia, underscores that the Curia is at the Pope’s and bishops’ service.

However, the notion of Synodality is often interpreted as a sort of democracy within the Church. At the end of the three Synods he celebrated so far, Pope Francis decided to publish all the paragraph of final documents of the Synod, even those who did not get the two-thirds majority and so they did not reach Synod consensus, helped to develop this “democratic” view.

Even the notion of Synodality is often interpreted in political terms, as it often happens to label some processes within the Catholic Church. This political perspective leads to losing sight of the issue of communion, that is essential: through communion in faith, all are united, both those who are in the center and the outward bounds.

During the meeting with the UGCC, Cardinal Luis Ladaria, prefect of the Congregation for the Doctrine of the Faith, spoke about the “Catholicism of the Church.”

Major Archbishop Shevchuk said that “we explained that we have a Byzantine perspective of Catholicism as a communion of local Churches, guaranteed and promoted by the Successor of Peter as a visible pillar and supreme servant of the universal communion of the Church of Christ.”

These words generated a discussion in the meeting about what “local Church” does mean, as even the Ukrainian Greek Catholic Church is referred to as a local Church. However, the UGCC has metropolitan bishops in Ukraine, Canada, the United States, Brazil, and Argentina.

The gossip on Pope Francis’ reform said that the Pope might have wanted a sort of federation of local Churches, with jurisdictional authorities on doctrinal issues. Even the Evangelii Gaudium, Pope Francis’ exhortation that works as the guidelines of the pontificate, seemingly backed the idea.

The Curia reform seemingly follows the path of decentralization with the emphasis set on local Bishops conferences. However, the draft furtherly centralize things in the hands of the Secretariat of State when it comes to the production of documents and reflections. In the end, there is a shift from the healthy decentralization to a total centralization disguised as collegiality.

Eastern Catholic Churches show a different model. They have a Synod. They are rooted in their territories. They have a global presence; they live in communion among us, with no doctrinal issues; and they are in communion with the Holy See.

The deposit of faith guarantees the unity of Eastern Catholic Churches. In the case of UGCC, there is a Catechism drafted by the same Church. It is a unique document, that does not limit to adapt the Latin catechism to the Eastern mentality. The Ukrainian Greek Catholic Catechism instead sees the faith from a particular perspective, without changing nor adapting the truth of the Gospel.

There is an extensive discussion about how to interpret doctrine to read the signs of times. This discussion will be focal during the Synod of the Church in Germany. It seems mostly a political will to gain more faithful rather than a definite push to evangelize.

Not by chance, Pope Francis asked the Church in Germany to focus on evangelization. The Special Synod on Pan-Amazonic region will show if the discussion will be kept political or if Pope Francis will be able to center it on the need to announce the Gospel.

In the end, this has always been the central issue of the pontificate, divided between the need to communicate and the need to stay firm on the principles of the Gospel. The meeting with the Ukrainian Greek Catholic Church might have given Pope Francis response to this conundrum.