Why did Pope Francis criticize the 1968 movement in his speech to diplomats? Pope Francis, a crossroads and a dilemma

What does the story of the Vatican decoration to Mrs. Ploumen teach us 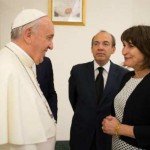 The story of the Vatican decoration given to Mrs. Ploumen, a pro-abortion activist and former member of the Dutch government, sparked many controversies.

Mrs. Ploumen was part of the delegation that accompanied the Dutch Royal Family in their visit to the Vatican last June 22. It was an audience, although of the highest level. The main reason for the audience was to return to the Royal Family a stick that belonged to their family, the Oranges, which got lost and has been found in the Jesuits’ Catalan Archives. It was not a State visit, however.

At the end of that meeting, the two delegations exchanged decorations, which is a sort of diplomatic praxis for State visits. All of the members of the Dutch delegation were decorated with the Pontifical Equestrian Order St. Gregory the Great, established in 1830.

As a general rule, the Order is conferred at the request of a local bishop, through by the Papal nuncio. This procedure is skipped in the case of the exchange of decorations for a State visit. If we glance at the list of those decorated with the order, members of this Dutch delegation, or of any other delegation that has paid a visit to the Vatican, are not included.

The exchange of decorations does not actually take place very often in State visits, which follow a very specific ceremonial that foresees when are they appropriate. The reason is that not all the members of any given delegation have a cursus honorum that justifies a pontifical decoration. In the end, the visit to the Pope is also considered an occasion for evangelization, and this is what the Vatican protocol underscores.

The issue of the decoration grabbed the headlines after Mrs. Ploumen’s statements in Dutch television stations. In the interview, Mrs. Ploumen almost insinuated that, although her pro abortion advocacy is not mentioned in the reasons for the decoration, the Pope was certainly aware of her work. So, she implied that the decoration could be considered an award for her activism.

The interview was in Dutch language, for a Dutch television, and it was clearly a photo opportunity. Ploumen ended her term as minister Oct. 2017, and she now has the need to keep a spotlight on her campaigns. Her pro-abortion foundation “She decides” was founded as a response to the Trump administration decision to defund NGOs that practice or support abortion. Ploumen’s Foundation collected 400 million dollars in one year. In order to keep on attracting donors, the Foundation needs some publicity.

Mrs. Ploumen played her cards, and it went well for her, as the case generated international interest. Catholic circles were rightly scandalized that a Pontifical honor was bestowed on a person very much on the opposite side of Catholic morality. The scandal generated questions in turn, and the Holy See Press Office’s answers to these questions came late.

This case, in the end, says a lot about the Holy See. It sheds light on issues that go beyond Pope Francis’ pontificate, and also beyond the issues that came after the doctrinal discussion that arose around some Papal declarations and the Apostolic Constitution “Amoris Laetitia.” This is not just a matter of a “liquid” pontificate. It goes far beyond this Pontificate.

There are three main issues at stake.

The first is the language of the Vatican. Vatican protocol issues are mostly considered baroque. They are choreographed, that is true. But choreographed not in a negative sense. Protocol is a language that expresses the point of view of the host country. Visits to the Pope are managed by rules of protocol that represent a “grammar” of relationships and thoughts. Every single gesture must contribute to the notion that one is paying a visit to the Vicar of Christ. Everything is oriented to transmit the Catholic faith. The State, for the Holy See, is just a tool for evangelization. Not the other way around.

The issue is that this grammar is seemingly not understood, even within the Holy See ranks. For example, the exchange of honors with the Dutch Royal Family visit was not foreseen, as they came for an audience, and not for a State visit. The exchange took place to give the event more solemnity. In the end, if the grammar of that protocol language had been respected, there would have been no problems. So, the first issue is to understand again the Holy See proper languages. They cannot be dismissed, nor considered superfluous.

In the end, the push to dismiss the Holy See protocols or see them as baroque was spread by secular propaganda, that would want the Holy See out of the concert of nations, but that in the end does not abstain from using the Holy See to back its particular targets. This is what Mrs. Ploumen did, by showing off the St. Gregory the Great Order.

Mrs. Ploumen’s move also meant that she recognized the Holy See State and its diplomatic importance. To be honest, Mrs. Ploumen did not want to support the Holy See by showing the medallion she was given. She did it to advance an agenda that goes against the teachings of the Holy See.

To sum it up, the Holy See is recognized as a sovereign State only when it suits some particular interest. This mostly happens in the secular world.

This leads us to the third issue at stake. The Holy See sovereignty must be defended by the members of the Church as a very important mean of evangelization. Sovereignty is not a relic of a Medieval past. This is not fully understood.

That the Holy See’s sovereignty is important is proven by the attacks against it raised in the course of the last years, in the shape of campaigns against the Holy See’s presence at the UN or through more subtle leaks; but it is also proven by the fact that when countries need to be backed on some sensitive issue or even a mediation, they look directly to the Holy See: this has been recently proven by the vote on the talks on nuclear disarmament and also in the Venezuelan request for the Holy See to mediate in its internal conflict.

The Holy See’s sovereignty is a very important tool, indeed. For example, speaking to the Chilean authorities during his 22nd international trip, Pope Francis launched an appeal for human dignity, which otherwise could have had less traction. Pope Francis’ words touched all the issues at stake, including the abortion bill recently passed in Chile. Chile has one of the most restrictive anti-abortion laws in the world, but there are many attempts to liberalize that law.

In the end, without interfering with States’ politics, the Holy See can take the role of a sort of moral prod for the world, helping to advance the common good.

This must be understood by the Holy See ranks. The Ploumen incident is seemingly born out of a lack of comprehension of diplomatic language, or a lack of attention which brought about – for example – not scrutinizing the composition of the members of the Dutch delegation.

From a small mistake born out of routine, a media avalanche was created. Its only effect was that this media storm allowed Ploumen to ride on the crest of the wave. This avalanche could have been prevented. A greater awareness of the Holy See’s importance within the Concert of Nations can eventually block any avalanches. But it will not be easy. And it will take time.