Pope Francis and the Need for Non-polarized Communication What does the story of the Vatican decoration to Mrs. Ploumen teach us

Why did Pope Francis criticize the 1968 movement in his speech to diplomats? 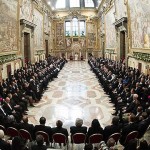 Pope Francis addressed his first speech of the year to the Diplomatic Corps accredited to the Holy See, following a consolidated tradition. The Pope’s speech was particularly important. It did not merely consisted of a wide and detailed overview of the Holy See’s diplomatic work. The speech identified also some critical points. In particular, it identified a very precise critical moment: 1968.

It is not the first time that the 1968 revolution, and the change of vocabulary it bore, is part of the Holy See’s diplomatic message. Archbishop Silvano Maria Tomasi, when he was Permanent Observer of the Holy See to the UN Office in Geneva, underscored many times the connection between the affirmation of the new rights started with the 1968 sexual revolution, and a change in the diplomatic scope of work.

It is however the first time that Pope Francis, in a diplomatic speech, clearly shed light on the issue, going beyond the general sense of diplomatic discussions. In the end, the Holy See diplomacy must not just be part of the processes. Rather, it must make of those processes a path toward the common good, the real Holy See’s international agenda.

Pope Francis starting point was the 70th anniversary of the Universal Declaration of Human Rights, that is being commemorated this year. The Pope denounced that “particularly in the wake of the social upheaval of 1968” the interpretation of some rights “has progressively changed, with the inclusion of a number of ‘new rights’ that not infrequently conflict with one another.”

The Pope stressed that these “debatable notions of human rights that are at odds with the culture of many countries” did not help “the promotion of friendly relations between nations.”

He said that this trend bears two risks. On the one hand, that “in the very name of human rights, we will see the rise of modern forms of ideological colonization by the stronger and the wealthier to the detriment of the poorer and most vulnerable.”

On the other hand, “that the traditions of individual peoples” are “invoked as a pretext for disregarding the due respect for the fundamental rights proclaimed by the Universal Declaration of Human Rights” – an approach that the Holy Father rejects.

This is a crucial issue, directly connected to the international situation. The new vocabulary that was born out of the 1968 sexual revolution has taken coherent and definitive shape since 1989, when the fall of the Berlin Wall generated the so-called multipolar world: there are no longer opposing blocks, with a plurality of subjects coming into play. The United Nations was not called anymore to face the emergency of a possible war, but felt it had been given a sort of universal vocation.

Behind each of these words lies a particular threat. For example, behind the formula “reproductive health right” lays hidden the intent to affirm the right to abortion. Not by chance, Pope Francis himself, in the speech delivered to diplomats, underscored that the right to health “has assumed implications beyond the original intentions of the Universal Declaration of Human Rights,” which “sought to affirm the right of every individual to receive medical care and necessary social services”. These words were, in fact, an indirect criticism of the promotion of Sexual and Reproductive Health Rights.

In the end, Pope Francis speech to diplomats can be considered a powerful complaint against the lobbies that are working to affirm a series of new rights that not only deviate from the original spirit of the Universal Declaration of Human Rights, but also instrumentalize that spirit to advance these new rights.

In an interview granted to ACI Stampa, Archbishop Tomasi noted that “the United Nations aims at creating a New World Order, and it made up a new anthropology to achieve this goal.”

This new anthropology – he continued – creates a person “closed onto itself”, that “reaches his goal” when his / her wishes are met. The relational dimensions is thus denied, and the outcome is “emptiness and nihilism,” that also brings about an overturning of nature, so that “gender and physical identity” are not endowed by nature, but chosen by the individual.

One of the strategies to carry forward this new anthropology is to corrode society starting from the family, as it happened at UN conference of Cairo 1994 and Beijing 1995.

Not by chance, Pope Francis identified the family as one of the pillars of pontifical diplomacy, as a reaction to the deconstruction of family carried forward at the highest diplomatic levels. As sexual gender becomes a choice, family, maternity and children are just an obstacle to the right to a limitless freedom and to self determination, and for this reason the notions of family, maternity and children must be transformed.

Thus, social, political, juridical and spiritual norms are to be changed and redone according to the sociocultural changes of the moment, or individual choices, or the agreement of a majority.

All of these opportunities are an outcome of the new dictionary of the United Nations. It is, in the end, the dictatorship of relativism that Benedict XVI already denounced – he dedicated to truth his first message for the World Day of Peace (In Truth, Peace).

Pope Francis’ diplomatic approach is more pragmatic. It was widely noted that a lot of the UN vocabulary found its way into the encyclical Laudato Si. The adoption of that vocabulary can be a problem.

With his latest speech, Pope Francis incorporated his diplomacy of mercy and prayer to the subtle diplomatic battles. Opposing the UN vocabulary is one of the Holy See’s objectives, especially in international negotiations, where every detail is important.

Let us look at a concrete example: the negotiations for the convention on Cluster Munitions, which the Holy See was among the first to sign. During the negotiations, the Holy See introduced the notion of the right of the victims to be assisted – it was the first time such right entered into a UN convention. The Holy See-backed paragraph was amended at the request of a delegation, that asked that the assistance needed to be “gender sensitive.”

This small addition in a negotiation on arms and disarmament – which is one of the main focus of the Holy See diplomatic action – could be used to pressure countries to be “gender sensitive” and to develop legislation for a new kind of “health care system”.

This is why the Holy See worked to make clear that everything was to be considered according to the legislation of each State, thus avoiding pressure through so-called “soft law.”

It is for this same reason that the Holy See did not sign the UN declaration on the decriminalizing of homosexuality. It was not a matter of discrimination against homosexuals. It was the opposite. The Holy See maintains that the Universal Declaration of Human Rights, that establishes that all men are equal, already covers all human beings. Signing on to a new declaration in the name of gender sensitivity could have created the paradoxical situation that “some men are more equal than others.”

The reason for the crisis of the human being, in the end, really lies in this change of vocabulary started with the 1968 sexual revolution. The outcome of that sexual revolution was that of creating a man that stands alone, detached from social relations, who is allowed some hedonistic pleasures but no possibility to really take decisions.

So, speaking of the 1968 crisis, Pope Francis reiterated the Church’s concern for the human being. And he underscored that the center of the Holy See’s international commitment is the common good.