Pope Francis, the open questions on the financial scandal Has the discussion on the next Pope already begun?

Why is Laudato Si so crucial to understanding Pope Francis’ pontificate? 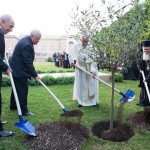 The celebration of the 5th anniversary of Pope Francis’ Laudato Si involves the launch of a Year of Creation and a text, “Journeying towards care for our common home,” drafted by an interdicasterial committee on integral ecology established after the publication of the encyclical.

In the end, the just-released text by the interdicasterial committee seems to be an apostolic exhortation, which normally would be the outcome of a long synodal effort. It is significant that Laudato Si was the object of their work.

Why is Laudato Si so crucial for Pope Francis, then?

First of all, Laudato Si says a lot about Pope Francis’ modus operandi. The Pope has identified a pragmatic and concrete topic that could have a universal impact and shed light on it. Ecology, in the end, is everyone’s interest and involves everyone. It is an issue both for the State and the people, and in particular for the poor. It was, then, the ideal topic for an encyclical that could fulfill Pope Francis’ wish to have a dialogue with the world.

Secondly, the encyclical focuses on a particular topic and looks at it with a universal glance. Pope Francis does not provide broad scenarios. He instead looks at concrete problems. Some of these problems are, to Pope Francis, particularly paradigmatic. Ecology is one of these topics.

Third, the theme of the encyclical is placed in continuity with the work of his predecessors. Pope Francis is a talented “borrower” of others’ ideas. “The name of God is mercy” is a Benedict XVI’s phrase, for example. The concept “integral human ecology” first appeared in Benedict XVI’s encyclical Caritas In Veritate. It was not by chance the passage is mentioned in Laudato Si and became the controlling idea of all the encyclical’s reflection.

Finally, Pope Francis shows that he does not want to move away from traditional themes. His words on life and against abortion are powerful: Pope Francis has always been particularly inflexible. In Pope Francis’ spirit, however, everything is connected. So, even the traditional issues seem to be absorbed by the many pragmatic recommendations of the encyclical. The just-released booklet has many practical suggestions, too.

In the footsteps of Laudato Si, is the Church changing paradigm? The Second Vatican Council inaugurated a new way of drafting the Church’s documents. Since then, documents have began with a particular, everyday life issue, and from there broaden the spectrum to analyze universal problems. The Second Vatican Council thus put aside the classic setting for the Church’s documents, that were always based on the revelation of Jesus and then went in-depth to the world issues.

Laudato Si seems to have inaugurated a new approach, which was taken without a Council, a meeting, or approval by a large number of bishops. Pope Francis does not begin with particular issues. He starts with pragmatism. This approach made Laudato Si very juicy to the secular world. When Pope Francis went to the United Nations in New York in 2015, everybody had read Laudato Si.

However, Laudato Si, like all other Pope Francis’ documents, bears the risk that the pragmatic approach overshadows the religious rationale. Whether this is intentional or it is the result of superficiality, it is yet to be assessed. We can make one guess: the ecological theme was, first of all, relevant to Pope Francis as a common challenge for the people of Amazonia.

The publication of Laudato Si was then the beginning of an ideal path that led to the World Youth Day in Panama and the Special Synod for the Panamazonian Region. Integral ecology is important to Pope Francis because it is a tool to come closer to his Bolivarian dream: to gather all the people of Amazonia and to form a vast Latin American continent that does not marginalize the indigenous people and at the same time can be a guide for the world.

Laudato Si is paradigmatic in Pope Francis’ thought because it bears this Panamazonian rationale. It is not, then, surprising that there is a whole year of celebration ahead.

The question now is whether this pragmatic approach will change the world or not?

In the end, Laudato Si is not just an encyclical on the ecology and care for creation. It faces all the social issues and put them under the umbrella of human ecology – from war issues, to good practices to save the planet.

The approach is also connected with Pope Francis’ speeches to the European Parliament. The common thread between Laudato Si and the 2014 Strasbourg speeches is the defense of human rights, that comes directly from that research on integral human development that is at the root of the Social Teaching of the Church.

During his speeches at European institutions (the European Parliament and then the Council of Europe) Pope Francis spoke about poverty and immigration, underscored the value of the family, condemned the opulence of the world and the throw away culture, and shed light on social plagues like abortion. They were cutting edge speeches, with sharp criticism toward the European institutions, that shed light on the need for more “humanity” within bureaucratic institutions, and that put human rights at the center again, as they were initially conceived to be.

This turning point has taken place five years after the publication of Laudato Si, while the world is shocked by the pandemic outbreak. The newly released booklet covers all the issues addressed in the social teachings of the Church, from which no one should disengage. However, we cannot escape noticing that this same text provides a lot of pragmatic suggestions and little overall direction. A comprehensive vision seems to be missing. Will Pope Francis be able to give a broader view?