A must today as ever: Talking about God in light of Pope Francis’ missionary push 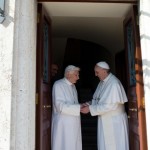 On February 26, 2013, two days before the end of Benedict XVI’s pontificate, the Czech priest Tomas Halik launched in Rome the Italian edition of one of his most important books, “To the far ones nearby.” And on March 13, 2014, while Jorge Mario Bergolio was celebrating his first anniversary as Pope, the same Halik won the almost 2 million dollars of the Templeton Prize that is awarded to “those who have contributed to elevate the world’s spiritual profile.” At the end of this coming August, Halik will be in Rome’s environs again, and to be precise, in Castel Gandolfo, where he will lecture on “How to speak about God in the contemporary world.” The lecture will be given to the members of the Ratzinger Schuelerkreis, the circle of former Ratzinger students that for the last two years has also included young students of Ratzinger’s theology.

Benedict XVI himself picks the topic of the annual Schuelerkreis meeting out of a set of three that his former students propose to him for the forthcoming meeting at the end of each gathering. This year – recounted Fr. Stephan Horn, who was Ratzinger’s assistant at the Regensburg University, and who is currently one of the coordinators of the Circle – the Pope Emeritus took longer to reflect than normal, and finally communicated the topic of the meeting at the end of November. Was his a prophetic choice?

The question arises while we are nearing the beginning of the third year of Pope Francis’ pontificate. The topic of evangelization was pivotal during the General Congregations, i.e., the pre-conclave meetings of Cardinals. According to what the Cardinals said after the conclave, they all focused on the need for a change of narrative, so that the Church would be more appelaing and trusted and less constrained by scandals and by the gangrene of internal careerism. Another item is the famous speech Cardinal Jorge Mario Bergoglio delivered during the pre-conclave meetings, which Pope Francis allowed to be made public. The speech zeroed in on the need for the Church to go to peripheries, even to existential peripeheries, and announce the Gospel.

This is the program Pope Francis has followed ever since. Every gesture of the Pope during the year and a half of his pontificate was intended to clean up the image of an self-referential Church and to make the Church visible in the peripheries. This program can be discerned through the many events of his pontificate: his choice to make his first trip to the small Italian island of Lampedusa, an asylusm-seekers destination for refugees in the Mediterranean; the first consistory for the creation of new cardinals, surprising since many of the new red hats hailed from dioceses that never stood out in any way; the desire to demonstrate the Church’s intention to clean up its finances and organization by hiring expensive external consultants; the establishment of a Council of Cardinals, made up almost in its entirety by people not in the Curia, in order to show that it is time to get out from the self-referentiality of the curial offices; and finally his wish to show that the Pope is close to the people: he spends hours with sick people at the end of every general audience, he carries his bag by himself when he boards a plane, he refuses to use a bullet-proof car.

These and many other gestures have shown the face of Pope Francis’ ‘revolution’.

This ‘revolution’ has some pros. For example, the Church emerged almost unscathed after it was attacked by two United Nations committees. The Committee for the UN Convention for the Rights of the Child and the Committe for the UN Convention Against Torture orchestrated a campaign against the sovereignty of the Holy See. The Committees issued two reports – a process that is followed for every State – that pointed the finger admonishingly against the Church, threatened its sovereignty by demanding changes in canon law and cited clergy pedophilia manipulatively as a rationale for this purpose.

But none of this criticism seems to stick to the Church. Pope Francis can also address hot issues without any negative media backlash. This happened, for instance, when he delivered a speech to the European Parliament on November, 25. In that address, he touched on hot issues such as the Christian roots of Europe, the concept of the natural family that European legislation no longer takes into consideration, and abortion. But none of these issues was emphasized or criticized by the press as happened in the past; instead, the secular media chose to highlight the less critical issues of the speech, such as immigration, poverty and social exclusion.

Yet these pros also indicate the other face of the coin, for example, that a Church with a cleaned-up image, one that is so attentive to social issues, is a Church that is not able to speak about God in the deepest sense. The search for a change in the way the Word is announced has brought this pontificate to embrace messages that the secular world loves precisely because Pope Francis converses with the secular world on issues that interest it. But when he speaks about faith he does so primarily through the lens of popular piety. What would happen if the Pope’s discourse focused on the Word itself, on the deepest sense of the Gospel, more than on its concrete application?

True, the number of people attending the Sunday Angelus and the general audiences has increased to “bombastic numbers,” according to a source who works in the Prefecture for the Pontifical Household. And it is may also be true that Mass participation has increased.

On the other hand, it is perhaps also true that we are lacking the next step. How much are the faithful who have returned to the Church, moved to do so by papal slogans and by the Church’s social action programs, able then to live out fully the presence of God? How much is a Church that basks in its positive public image able then to evangelize?

This is the eternal conundrum of the Church, divided as it is between evangelization and the need for a good public image. The second has seemingly prevailed. The professionalization of media communication, based on the model of the secular world, has also led to a personalization of comunication, completely focused on the leader. Nowadays, Pope Francis is leading the Church forward in the polls the same way that political leaders attempt to lead their parties forward in an effort to capture public opinion. The leader now precedes the institution, and everything that happens is credited to him. In the United States, President Barack Obama has made many unpopular decisions and – according to some observers – even un-constitutional ones, but his popularity has not decreased as a consequence: a universally respected leader can act this way without negative consequences.

This policy cannot be applied to the Church, a universal institution serving the world. Beyond the Pope’s popularity, one must consider the institution that remains even while people within it come and go. The institution is expression of the will of God, and what it has to communicate must be focused solely on Him.

Perhaps Benedict XVI felt that God was being marginalized and that media communication was overtaking evangelization. In the midst of the profesionalization of Vatican communications, the Pope Emeritus has perhaps felt the need to return to speaking about God. By choosing this topic, he indicates a path that goes beyond any communication campaign and the popularity of any Pope.

Who knows if Pope Francis will take this advice? Pope Francis and the Pope Emeritus are often in touch – albeit no news of a meeting between the two for Christmas greetings has surfaced this year – and Pope Francis has stated clearly that the Pope Emeritus is an institution. Benedict XVI has also served as a sort of hidden advisor for Pope Francis, and he humbly sends him suggestions and counsel, whenever it is requested. With his pick of the next Schuelerkreis topic, he indicated a path forward. Will the Church be able to follow it?