Pope Francis: the world behind ‘Laudato Si’ The “Joy of the Gospel” is the solution, but some progressives do not understand it

Will Pope Francis’ Church be able to go Beyond the Secular Agenda? 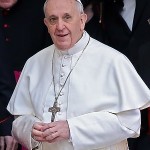 To encounter the secular world or to shape a new civilization? Pope Francis’ Church is divided between these two poles. Despite the Pope’s continual appeals in favor of desecularization, of going against the grain and of fighting ideological colonization (especially in terms of the family,) his notion of ‘going to the peripheries’ has been misinterpreted as an adaptation to the pressure exerted by secular trends. The coming Synod of Bishops will there foretest our understanding of where Pope Francis wants to direct the Church.

Certainly, it is clear where some groups want to direct the Church. The June 23 presentation of the Instrumentum Laboris (working document) of the coming Synod of Bishops showed that there are pressures on the Church to change doctrine, or at least to change the perception of it. The working document for the 2015 Synod was drafted by a process that combined new paragraphs, composed on the basis of the responses to the questionnaires sent out earlier by the Synod Secretariat, together with paragraphs taken from the 2014 Synod’s Final Report.

Among those taken from the Synod’s Final Report, are the controversial paragraphs nos. 52, 53 and 55, which deal with pastoral care for divorced and remarried persons, the proposal of a penitential path for the latter to follow in order to be allowed to receive Communion, and the pastoral care for homosexual couples.

These three paragraphs did not gain the 2014 Synod’s consensus. A consensus is reached in a synod by an affirmative vote on the part of a supermajority (two-thirds) of the Synod Fathers. By custom, this vote takes place secretly, and paragraphs that do not receive approval by a supermajority are not published in the final document. In an attempt at transparency, Pope Francis made the decision to publish the entire report and to disclose how many votes each paragraph received. As a result, none of the paragraphs was rejected, even though some of them failed to reach this consensus, consisting almost in unanimity, which could be thought necessary in order to express the communion between bishops.

By reintroducing those paragraphs without revision, the General Secretariat of the Synod of Bishops wanted to emphasize that these are the topics at issue, and that the Synod Fathers are invited to discuss them notwithstanding the fact that many of the previous Synod Fathers considered the arguments already closed. Is this the way communion between bishops is brought about?

It is easy to foresee that discussion at the upcoming Synod will be lively. Though the majority of bishops appointed until now backs the Catholic tradition, the minority who are pushing for changes is very well organized.

The delegate from Belgium will be Bishop Johan Bonny of Antwerp who backs homosexual civil unions and who also wrote an article on the topic, translated in five languages. The German bishops’ commentary on their responses to the questionnaire sent out by the Synod Secretariat was also translated into five languages.

This massive work of translation and circulation is intended as part of a campaign in favor of a pastoral revolution aimed at achieving a real change in doctrine, and not a mere pastoral plan aimed at supporting civilly remarried and homosexual Catholics in their journey towards a conversion of heart.

German bishops went even further. While in the US, Archbishops Salvatore Cordileone of San Francisco is fighting to preserve the Catholic identity of Church-run schools and to retain the right to hire according to Catholic doctrinal and moral principles, two-thirds of the German bishops voted for a change in their nation’s civil labor laws so that the divorced and civilly remarried, or those in a homosexual union, will not have to forfeit their employment by the Church, as has been the case.

In fact, German bishops have been headed down this path for years. In years past, a wide discussion has taken place concerning Catholic family counselling offices in Germany. These offices did not offer abortion, but they did issue certificates that gave young people the license to ask for an abortion, to be performed elsewhere. St. John Paul II and Benedict XVI opposed the German bishops on this matter.

But now this tendency risks going global. The German Bishops’ Conference is extremely wealthy, and although it sends a great deal of money to the foreign missions, for some time now it has lost its Catholic identity. Visiting Germany, his homeland, in 2011, Benedict XVI underscored the need for a more spiritual Church, so that it could grow closer to its true, inner identity. Speaking with Catholics involved in politics, Benedict XVI also stressed that self-satisfaction over its good works should not to lead the German Church to lose sight of the truth of the faith. However, a short time after, during a general assembly, the German Bishops’ Conference opted once again to allow the agenda of good works to overshadow faith.

The issue of faith is crucial. Not by chance, the more active, smaller groups engaged in promoting the ‘agenda of mercy’ do not focus on faith as the core of the issue, but speak mostly about the problem of the decline in numbers of the faithful. All of the discussions in the Church at present zero in on smaller issues. For example, the discussion in the Synod of Bishops is focused on access to Communion for the divorced and remarried or on pastoral care for homosexual couples. Discussion on the overall life of the Church has been also reduced to an argument between conservatives and progressives, and even more narrowly, to an argument between promoters of the pre-Vatican II liturgy and promotors of the post-conciliar liturgy.

In fact, the perspective should be wider, and should not be confined to the Synod’s issue. The small groups that are pushing the Church toward a secular agenda – which they define as ‘the agenda closest to contemporary man’ – were also at work in drafting the encyclical “Laudato Si.”

The first ecological encyclical in history – and the first wholly by Francis – might be interpreted as a silent endorsement of the UN development agenda. It is well known that this UN agenda backs birth control behind the ambiguous formula ‘sexual and reproductive health’, a euphemism that includes the right to abortion.

But all the meetings on the encyclical organized by Catholic organizations since its publication embrace this secular view. This attempt to dialogue with the world on its terms alone risks harming the meaning of the Church’s presence in the world.

Another of these meetings that will take place this week on July 1 is organized by the Center for Instruction, Staff Development and Evaluation (CISDE) and the Pontifical Council for Justice and Peace, with the No-Global guru Naomi Klein among the guest speakers. At the Commission of the Bishops’ Conferences of the European Community(COMECE), in Brussels, another meeting of this kind gathered the Irish eco-theologian Sean McDonagh and the European Member of Parliament Philippe Lambert, a self-proclaimed Christian affiliated to the Green Party. Lambert said that he agrees with Pope Francis’ encyclical on everything except on the fact that demographics is not the real issue. “Demography is the issue,” he affirmed, and asked from the Church at least an acknowledgement of the issue.

His argument stands on one point: because the encyclical assumes we must reduce consumption by 20 percent, the world’s population should be cut by 20 percent. This is not what the Pope intended. But Lambert’s counter-argument follows strictly from it.

In the end, many questions remain: why does the Church not advance its own proposal, instead of taking on the UN’s development agenda? And why do some groups within the Church abandon Catholic education, instead taking on, in the name of mercy and ‘being pastoral’, an agenda that causes faith difficulties for simple people?

Pope Francis gave off different signals when on June 25 he met the students of the Ecclesiastical Academy that are future papal nuncios. He told them: “You are called to seek, in the various churches and among the people where they are found, the good to be encouraged.” Then the Pope added, “The service to which you have been called requires you to protect the freedom of the Holy Seethat, in order not to betray its mission before God and for the true good of mankind, cannot be imprisoned by the logic of cartels, taken hostage by the accounting division of factions, accept the division among consuls, submit to political powers and to being colonized by the current dominant streams of thought or the illusory hegemony of the mainstream.”

The appeal to eschew the hegemony of the mainstream highlights the need to speak about God and to return to the heart of faith. Not by chance Benedict XVI chose “Speaking about God in a contemporary world” as the theme of the annual meeting of his former students, while Pope Francis made of this issue the center of his pontificate, accompanied with the constant demand for a Church in state of a permanent mission.

However, in addition to mission there remains the identity quest, a quest that forms the basis of missionary activity. Fr. Piero Gheddo, a long-time missionary, raised the issue when he commented on the folding of “Ad Gentes,” the only Italian magazine that was still dedicated to the missions. In his commentary, he emphasized that today’s missionaries have become social workers rather than heralds of the Word of God. This is the issue at stake today. Before being overtaken by details and arguments, the Church today needs to recreate a clear, unified identity for itself. If not, the small groups will always dominate the discussions.

3 Responses to Will Pope Francis’ Church be able to go Beyond the Secular Agenda?