Pope Francis, the effects of the pontificate 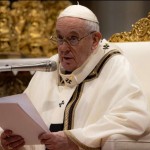 Pope Francis’ pontificate began with intense media hype and the hope that there would be a fundamental change not so much in the Church but in the management of the Church. In question, at the time of the conclave, was not the doctrine but rather the administration, how the Church had responded to the scandals, and how the Church had been able to respond to these scandals.

We came from a difficult season. In 2010, on the eve of the Year for Priests, the media spread for a year the news of actual and alleged abuses of members of the clergy in a communication operation that led the Holy See to hire a communications advisor in the person of Greg Burke.

In 2012, it was the first Vatileaks to hit the Holy See, with the publication of confidential documents coming directly from the Pope’s desk. And then, between 2011 and 2012, the leaks on the Vatican’s financial reform and the pressures on how the Holy See managed the finances created a negative public opinion, and very hard to overcome.

These were all issues that had been discussed in the general congregations and had then necessarily become part of the newly elected Pope’s agenda.

Nine years later, however, one must ask whether these reforms have been effective.

The attacks on the finance of the Holy See in 2012 were also dictated by the fact that the Holy See was setting up a system that broke away from the usual influences, especially Italian ones, adhering to the best international standards.

Ten years later, the Holy See’s management is again firmly in the hands of Italians regarding anti-money laundering. Furthermore, the latest financial scandals have become part of a Vatican process that has also led to the loss of power of the Secretariat of State, which is constantly under attack.

The attacks on the Secretariat of State are not new either: they were there ten years ago and still exist. With a difference.

Benedict XVI had always made it clear that he would never throw Cardinal Tarcisio Bertone, Secretary of State, off the tower. Pope Francis has never hinted at such a thing. Indeed, how collaborators change, sudden and cutting decisions such as that of moving the funds of the Secretariat of State to the APSA, or that of sending Cardinal Angelo Becciu to trial, represent a different signal: nothing is safe, nothing is linear.

Ten years later, abuse scandals still make headlines and are still used for clockwork. An alleged case of bad behavior led to the resignation of the archbishop of Paris, Michel Aupetit, accepted by the Pope “on the altar of hypocrisy” the incoming media storm led Cardinal Ricard to confess abuses on a fourteen-year-old, thus removing attention to the letter from the French bishops on the law of euthanasia which was intended to create an honest debate.

Apart from the media hype, little has changed in the attitude toward the Church. Pope Francis is recognized as having extraordinary attention to the poor, the marginalized, and migrants. Still, the media permanently silences him when he talks about abortion or the family. There is a hidden magisterium of the Pope, all to be discovered.

If this magisterium does not help the Church, in any case, to solve problems externally, it has not solved internal issues either.

Pope Francis established several commissions during his pontificate until he promulgated a reform of the Curia, which, in his intentions, should have made everything more functional. But this is still not the case because there are no transitional rules. After all, some changes are simple amalgamations that do not have much practical use because, in the end, there is no underlying philosophy.

There is much talk of the synodal Church and of listening, less discussion of the Church’s proposal. The result is that the Vatican dicasteries are confused and do not understand whether their task is to develop or receive themes to be developed.

It is a situation that will have several long-term effects.

The first is the loss of awareness of the institutionality of the Church. Passing from an organism that teaches to an organism that listens, the Holy See becomes only an accessory passage for many. It is not a point of arrival, and it is not a starting point. It does not have a defined philosophy.

If the institution does not count, then even the work done in the institution can be superficial. This is a real risk, although it still seems a long way off. But it is part of the Pope’s attitude.

Another theme is that if something is old, it is right to change it. However, it does not work exactly like this with the tradition of the Church and, above all, with its formula of government. Some initiatives, such as financial centralization or relying on external auditing companies, seriously jeopardize the very sovereignty of the Holy See.

But if sovereignty is only considered functional and not substantial, it is not crucial that it is put at risk. At least, not for Pope Francis. Who, in the end, always decides on his own, and by deciding on his chances, not seeing the problems in their entirety.

Finally, there is the risk of a Church that listens a lot, but teaches little. It is the risk of the synodal Church and excessive democratization of the Church.

These are issues that could be resolved with a precise theological direction. But this is precisely what is missing. And the effects of the pontificate will be seen in the years to come.

2 Responses to Pope Francis, the effects of the pontificate