Pope Francis and Communications: Next Year’s Challenges Pope Francis: Between Reforms and Diplomacy

Pope Francis: What is the Real Enemy? 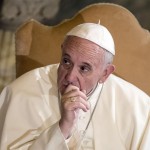 The approach of the highly-anticipated publication of the post-synodal apostolic exhortation that concludes the two Synods on the family may result in discussion focusing on an important topic. This topic is often overshadowed, though it is disturbing: how much has the Protestant Reformation had, and how much does it still have, an impact on the way Catholics perceive their Church?

The topic does not deal merely with the possible effects of the Reformation on Catholic discipline. It involves the nature itself of the Church of Rome as it has been historically conceived. Through his preaching, Martin Luther questioned the sovereignty of the Holy See. He replaced de facto the notions of freedom and responsible choices with the notion of mercy, and thus considered the human being not fully responsible for his choices, that is, not free. He unchained the Church from the authority of the Pope, and replaces the authority of the Pope with the authority of princes, that is, with secular power. Lastly, he initiated a denigrating campaign against the Catholic Church that still echoes in current anti-Catholic media campaigns.

“Martin Luther” (Siena: Cantagalli, 2015), a small book by the historian Angela Pellicciari, sheds light on the real contents of Martin Luther’s preaching and writings. Reading the book helps us to understand many of the current debates. Especially today it is important to be aware of the hidden and subtle enemy that is Protestantization.

Since Pope Francis was elected, these topics have become the center of the media agenda set for the Pope who came from Argentina. Pope Francis’ emphasis on mercy fits, in the end, with the notion of a Church necessarily disengaged on a political level, but very much engaged on social issues. Since the Pope did not take part in the Second Vatican Council, he was considered more vulnerable to the media campaign that tends to portray the Council as a rupture in the history of the Church.

That this was not the case has been proven by the extraordinary work of Archbishop Agostino Marchetto. Archbishop Marchetto authored three books on the history of the Second Vatican Council. The books are filled with documents that show that the Second Vatican Council was not about breaching the consistency of faith. The Council was not aiming at a different Church, with a different authority, eventually decentralized. The Council aimed at a Church able to use new language to describe the constant faith. The Pope was always the Pope; the Church was always Catholic, apostolic and Roman, Peter’s universality and authority were not to be undermined by the authorities of local bishops; priestly dignity was never put in question.

When the “media Council” finally broke out at the end of the Second Vatican Council, the campaign tried to lead the Church toward territories that the same bishops who took part in the Council did not want to explore. After the Second Vatican Council, debate mostly focused (1) on the possibility of married priests and female priesthood, (2) on the importance of local bishops, and even on an emphasis given to bishops by eventually admitting some of the members of the Council of the Synod to the Conclave, and (3) on a change of Church doctrine on sexual morality in order to adapt it better to the spirit of the world.

In fact, the drafting of “Humanae Vitae”, Blessed Paul VI’s encyclical on life and contraception, was characterized by a strong impact on the media. As one of the members of the drafting preparatory commission documented, the media sought to emphasize only selective viewpoints about the issues at stake, especially those more open to a possible change in sexual morality. Blessed Paul VI, a martyr of the Second Vatican Council because of his effort to preserve the unity of faith, circumvented the conclusions of the commission and reaffirmed Catholic doctrine as it was.

Not by chance, the possibility of a “pastoral updating” of “Humanae Vitae” was circulated during the last Synod on the family. Since some of the small group discussions during the Synod were about this issue, it might appear in the post-synodal apostolic exhortation that the Pope is drafting. Even the hermeneutic of the “case by case discernment” in terms of access to sacramental Communion for the divorced and remarried was originally based on the parish priest’s application of “Humanae Vitae” in the confessional. But pastoral practice based on a wise approach in the confessional is one thing, another is the institutionalization of a break with the Church’s doctrine. This way, the unity of doctrine collapses, as doctrine would be subject to every priest’s relativistic, subjective interpretation.

The push for subjectivity was one of Martin Luther’s arguments in his anti-Roman preaching. Angela Pellicciari writes: “With the elimination of the function of the magisterium, the denial of the priestly order, the exaltation of individual freedom and the rejection of the importance of works to achieve salvation, everyone makes his own decisions. Everyone reads the Bible and interprets it his own way, trusting in the Holy Spirit’s assistance.”

In the end, the risk of the institutionalization of “case by case discernment” is to arrive at the “by Scripture only” (sola fide) notion that Martin Luther promoted. The priest who discerns on a case by case basis puts aside the function of the magisterium and founds his activity on his personal interpretation of the Scriptures. He wields enormous discretionary power, but it is much more a human power than one derived from God.

In his encyclical Spe Salvi, Benedict XVI asks: “How could the idea have developed that Jesus’ message is narrowly individualistic and aimed only at each person singly? How did we arrive at this interpretation of the “salvation of the soul” as a flight from responsibility for the whole, and how did we come to conceive the Christian project as a selfish search for salvation which rejects the idea of serving others?”

Angela Pellicciari responds: “It did so because Luther has misinterpreted as slavery to Rome the universal charism of Peter and his function in defense of the whole Church. As a consequence, “the body has been abandoned”, it seems “in favor of souls, that is, of the most interior part of each of us, which corresponds to our conscience. It is as if soul and body are set one against the other, and each of them goes on its own. As if obedience to conscience is a substitute to obedience to Peter.”

When Luther breaks the Church’s unity with arguments and obfuscates much of the Church’s history, he creates a fertile ground wherein anti-Catholic hatred can ferment. The theme of the “free exam” is taken up by Freemasonry that – in the name of Reason – launched the strongest attack against Catholic Church teachings, undermining, in the first place, the Church’s authority.

After centuries, the Church’s authority has been undermined in public opinion which today endorses a poor Church that stays with the poor and is not involved in temporal issues (leaving to ‘princes’ the power to make decisions over the human being). The final aim is to undermine completely the teachings of the Church. This aim underlies many of the pressures moved toward Pope Francis to change Church teaching, or at least to be ambiguous enough in his statements to leave a space free for different interpretations.

This is the case with the post-synodal apostolic exhortation about which there is great anticipation concerning the extent to which its interpretation will swing from one side to another. It is noteworthy that the Church in Germany was the one that pushed hardest toward an agenda of mercy, the same reality of Church at local level that felt more than any other the impact of the Protestant reform, and that more than any other feels attracted to the spirit of the world. The system of the Church Tax (the Kirchensteuer) made it a rich local reality of the Church, but also worldly. Benedict XVI pointed to this worldliness in his speeches during his second trip to his homeland in 2011. The Pope also noted that secularizing trends have been providential, as they permitted the Church to rethink itself in more spiritual terms.

While everyone is pushing for a “more human Church”, a “more divine Church” is what is needed, as Cardinal Joseph Ratzinger once observed. This is the issue. The subtle enemy that is Protestantization is always current, and it is perhaps the hidden enemy that the Church must fight above all others.

Will Pope Francis succeed in confronting it? Will he be able to go beyond the narratives that describe his as a “pontificate of rupture”, as the Second Vatican Council was considered a Council of rupture?

For this reason, the Second Vatican Council is now pivotal. The rigorous work of Archbishop Marchetto must be carefully read. His latest publication, the diaries of Pericle Cardinal Felici, Secretary of the Council, witness the tireless efforts of this Council Father to bring the Church to unity, despite the drifts that came out during the debates. It was not an attempt to suffocate the debate, but rather an attempt to give them a continuity with the history and the doctrine of the Church.

Looking forward to Pope Francis’ post-synodal document, these issues must be pondered. Even bishops and cardinals should do so. Pope Francis is changing the profile of bishops, and consequently that of the College of Cardinals. The Pope puts much emphasis on the local Churches; he does not want Class A and Class B dioceses any more. The upcoming Consistory (it will likely be held on February 20) should give us a clearer indication of Pope Francis’ ideas. That Consistory should be also place for a discussion about the post-synodal apostolic exhortation. Hence, we will be able to understand whether the College of Cardinals has fully understood the import of the issues at stake. The Church’s Protestantization would leave it short of defenses. The secular world could then “conquer Rome”, the accomplishment of which has always been its final goal.

7 Responses to Pope Francis: What is the Real Enemy?