The Holy See charged of crimes against humanity remains silent. Here is why. 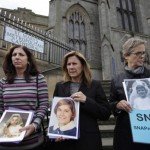 The last initiative had been the filing of an appeal to the International Criminal Court at the Hague that accuses Benedict XVI – together with the Secretary of Vatican State card. Tarcisio Bertone, the former Secretary of State card. Angelo Sodano and the prefect for the Congregation for the Doctrine of the faith card. William Levada – of covering up crimes committed by clergy against children, charging the Vatican officials of crimes against the humanity. The appeal has been filled by the Survivors Network of those abused by priests (Snap) and the Center for Constitutional Rights (Ccr). The Vatican – the report said – «has always resisted the idea of being subject in the laws of other governmental authorities, wheter national, international or local laws». The Holy See did not want to comment the appeal. Has it been a wise move?

In fact, there are several reasons why not to even talk about the appeal. The prominent one is that the International Criminal Court will not incriminate the Pope nor anyone of the cardinals. The guilt of a crime is personal, and the definition does not include the resistance to the idea of being subject in the laws of other governmental authorities. This is the reason why Cuno Tafusser, one of the judges of the International Criminal Court, said that «the path to incriminate  Vatican officials is a very narrow one».

Actually, the lawyers that appealed to the International Court knew very well that their request would remain unattended. But Snap and Ccr seem to believe that something will change after their appeal: they filled a 20 thousand pages dossier, outlining clergy abuses all over the world. By appealing to the International Criminal Court, they carried out the idea of Jeff Anderson, the Minnesota lawyer who’s made a career of suing the Vatican over its handling of clergy sex abuses cases. His first case involving the Catholic Church involved Father Thomas Adamson, a Minnesota priest who was accused of molesting several boys in the 1970s and 80s: it was 1983, almost two decades before the sex abuse crisis would erupt in Boston. Since that first case, Anderson has represented thousands of victims across the country, including creditors in several Church bankrupies. He has never agreed to a confidentiality close. And he never discussed for a compensation, except to say that contingencies range from 25 per cent to 40 per cent of judgements. Anderson’s firm – Jeff Anderson and Associates, which employs four other lawyers – has filed hundreds of sex abuse suits against the church. Though he will not disclose how much he has won in settlements, Anderson is thought to be responsible for a good chunk of the roughly $2.5 billion that, according to the U.S. Conference of Catholic Bishops, the U.S. Catholic Church has paid to sex abuse victims to date. He was among the lawyers representing abuse victims in the $600 million settlement with the Archdiocese of Los Angeles in 2007, the church’s largest payout ever. Actually, suing the Catholic Church is a very lucrative business, despiting what Anderson says. «It is not for money», he once declared to Associated Press.

Actually, Anderson know how to work to give their sues the most exposure he can. Anderson was the one who turned the Us Supreme Court the request for the testimony of the Pope in the case John Doe vs. Holy See. Can the Pope, the cardinals, the high representants of the Holy See be called to testify in a trial or be incriminated? Us Supreme Court declined to take the case. Anderson and his supporters proclaimed their victory. In fact, the Court did not take the case because of a juridical evaluation: according to the Act of State doctrine Joseph Ratzinger could not be accused nor called to testimony, because – at the time of the facts – he was acting as a Vatican minister, and no one can be judged for an Act of State. By not taking the case, the Court just letted know that there was no reason nor convenience to make an official pronouncement, since the trial would not eventually be carried out.

The International Criminal Court will probably take a similar decision. Yet the appeal had a huge international interest. And this brought great exposure to Snap and Ccr.  Snap is a non profit association, and it raises via direct mail, telemarketing, special events and Internet appeals something like 600 thousands dollar a year. But the majority of the earning comes from the percentage of the compensations got by suing archdiocese, the Vatican and so on. This is the mechanism: the Snap bring the victim to the lawyer, and they share what they get from the compensation. The Bbb, a rating agency that filled the Standards for Charity Accountability, did not even consider Snap a charity, because it «does not approve the organization budget, has not an approved conflict of interest policy, has not a voting member of the board who is assigned the responsabilità of serving as a the treasurer». In a word, there no way to understand where does the Snap gets money and how it manage it.

More. Some of the victims – for example Michael Baumann and Key Ebeling – abandoned the association. Steve Taylor, one of the most prominent contributors of Snap, had been arrested in 2008 because for attemted possession of more than one hundred child pornographic pictures. Barbara Blaine, the president of the Snap, wrote several letters to defend Taylor, asking the judges to turn a blind eye and focus on the work Taylor had precedently done.

Ccr – on the other hand – is a very active and rich associations. More than 1050 foundations – among the ones the Ford Foundation and the billionaire George Soros’ Open Society Institute – give grants for about 6 million and 200 thousand dollars. It also gets about 370 thousand dollars from Court Awards and attorney fees. Ccr had been founded in the 60s from leftist radicals  like Arthur Kinoy and William Kunstler, and took the defense of the member of the Us terroristic organization Black Panther. Most of their activity dealt with Middle East issues (they are known as wild anti-zionists), but now they decided to make a run on the lucrative case of the clergy abuses.

2 Responses to The Holy See charged of crimes against humanity remains silent. Here is why.