Turning back to God. The gift of Benedict XVI to the Church of Germany. And to all the Church. Will the prayer save the spirit of Assisi?

Unchain the Church. The program that Benedict XVI reinforced in Germany. 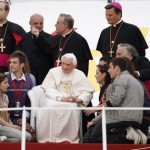 «When we say: “We are Church” – well, it is true: that is what we are, we are not just anybody. But the “we” is more extensive than the group that asserts those words. The “we” is the whole community of believers, today and in all times and places. And so I always say: within the community of believers, yes, there is as it were the voice of the valid majority, but there can never be a majority against the apostles or against the saints: that would be a false majority. We are Church: let us be Church, let us be Church precisely by opening ourselves and stepping outside ourselves and being Church with others». Benedict XVI held this speech off the cuff to the Seminarians of Freiburg, during his last trip to Germany. The speech has been recently published. And it gives the meaning of the quiet revolution applied to the Church by Benedict XVI. From Germany to all the Church, Benedict XVI is now reaching out to free the Church from his structure. The Pope himself explained, addressing to the National Committee of German Catholics that «we must honestly admit  that we have more than enough by way of structure but not enough by way of Spirit. I would add: the real crisis facing the Church in the western world is a crisis of faith».

The sentence “We are Church” was intentionally pronounced by Benedict XVI. The movement We Are Church was created in 1995 with a collection of signatures in support of an «Appeal of the People of God» that proposed the democratic election of bishops, sacred orders for women, the removal of the division between clergy and laity, the elimination of the requirement of clerical celibacy for the clergy, a new sexual morality, etc. The collection of signatures, which came to two and a half million, began in Austria and was then extended to Germany, Italy, Spain, the United States, Holland, Belgium, France, England, Portugal, Canada. The first document was followed by many more.

The epicenter of We are Church is still in Austria and Germany, with a vast following among the clergy, with a certain capacity to exert pressure on the bishops themselves, and with an aura of approval in various seminaries. A few days before Benedict XVI left to Germany, Wir sind Kirche  - the German branch of We are Church – released to the press a statement affirming that «one cannot contrast the crisis of God and the crisis of the Churc» and that the slogan of the trip («Where God is, there the future is») focus on the question of God, but one «cannot ignore the urgent ecclesial problems and difficulties, since the ecclesiasistical structures theirselves severely create hurdles in front of many people that are in search of God and that want to practice their faith in the ecclesiastical communion». «Talking about God – We are Church’s statement concludes – must not become a distraction from the crises and problems within the Church»

Benedict XVI’s plan goes beyond. The Pope set the sight high, and he reaches out for God. By doing it, he drew on the name of We Are Church to reverse its meaning: from a separate and contrasted «we» to a «we» that embraces the Church «in all times and places».

Maybe, the most delicate phase of Benedict XVI’s pontificate started in Germany. Germany has always been characterized by a mass of different movements for the Church renewal. Joseph Ratzinger himself writes  in his autobiography about the wind of change felt in his country long before the Second Vatican Council, which he embraced with enthusiasm. Then, he was aware of the fact that talking too much about the removal of the structures of the Church (from the dogmas to its organization) could bring to lose sight of the center of the life of the christian: the faith in God.

The last year, 150 German theologians signed and delivered the document: «Church 2011, a necessary turning point». Among the issues considered the «main challenges» for the Church of the future, there were:  greater participation of the faithful in the appointment of high ecclesiastical figures, priesthood for married  men as well, a better position for women in the Church, and great respect for same-sex couples. And there is the voice of a Vatican internal report about the German Church, named «Whitesnow and the seven dwarfs». Whitesnow is Annette Schavan, minister of the Education and number two of Angela Merkel in Cdu (now in the middle of a scandal for a 150 thousand dollar private flight to go to a meeting with the Pope in March). The seven dwarfs are the seven deputies of Cdu that – together with Schavan – asked with a public appeal to Benedict XVI to abolish the celibacy of the priests and to authorized married men to be priests. Behind the appeal of Whitesnow and the seven dwarfs there would be prominent German prelates, that aim to bring the Catholic Church to a renoval. Some of this prelates have already been recognized: Hans Langendörfer, secretary of the German Episcopal Conference, Klaus Mertes, rector of Canisius Gymnasium in Berlin, Matthias Kopp, spokesperson of the German Episcopal Conference. Robert Zoellitsch, president of the German Episcopal Conference, would be just a puppet in the hands of these powerful prelates. These prelates would use the German Episcopal Conference as a political platform, in order to gain ecclesiastical reforms. For sure, they use the news daily Suddeutsche Zeitung to develop their ideas. It is the same Suddeutsche that commented the Benedict XVI’s visit to Germany with the title. «He came, he saw, he disappointed».

The pressure within the Church of Germany is very high. But the German problem concerns all the Catholic Church. For example, Benedict XVI’s speeches in Germany had a strong impact even in Austria. Austria and «Germany have a complex relationship – Georg Schimmerl, Austrian, moderator of the web-site www.dernotizblog.com – they have a common language, but the small Austria (that numbers less inhabitants than the Bavaria) suffers of the influence of the Big Germany. Even the artists that lived in Wien – e.g. Mozart – are considered Germans, and not Austrians».

Schimmerl then explains that «even the secularizing trends follow a common path. In Austria there are just the 5 per cent of Protestants, but at the same time the percentage of Catholics diminished during the last years: 20 years ago, the 90 per cent of Austrians was Catholic; today, just the 75 per cent of Austrians are Catholics. The decline of Catholics in Austria is also due to Kirchensteuer, the fiscal law introduced by Adolf Hitler that obliges every Catholic to pay a tax to Catholic Church. Many did not want to pay the tax anymore, especially on the waves of the disappointment after the Groer case – the archbishop of Wien accused of abusing seminarians – and after the clergy abuse scandal».

Finally, the theological issue. «There had not been Austrian theologians of international reputation – Schimmerl explains – Karl Rahner – in fact, a German – is considered the “master” of Austrian theologians, since he taught at Innsbruck University and he was the counselor of cardinal Koeing during the Second Vatican Council. Hans Kung, indeed, is kept in great esteem in Austria, alike Joseph Ratzinger, considered by very few a reference point».

In Germany, 150 theologians began the discussion on the renoval of the Church. In Austria, there had been the document “Parish Priests Initiative”, promoted by Helmut Schuller, former general vicar for the diocese of Wien. The document had been signed by 250 parrish priest, and it invites to disobey Rome, if Rome does not align the Church to the modern times. Is it a real schismatic menace, or is it just the try to create confusion?

It is told that cardinal Schoenborn, archbishop of Wien, usually says privately – but he would never do publicly – that «the true enemies of the Church do not come from the outside, but from the inside»

Benedict XVI said it publicly, during is trip to Fatima in 2010. In Fatima, Benedict XVI began the “purification phase” of his pontificate. The purification is the goal of Benedict XVI. You can reach it by turning back to God. This is what he say in Germany, paving the way for the whole Church.

One Response to Unchain the Church. The program that Benedict XVI reinforced in Germany.