Egypt, toward a new Exodus? The Pope in Assisi. Aiming at the Year of Faith. And – maybe – a new encyclical.

Libya, what future for Christian community? 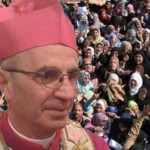 After the fall of Mu’ammar Gaddafi, Christian missions in Tripoli campaigned for a massive movement of prayer in Libya. Because nobody know what will be of Christian community now that the new transition government – and then the constitution of the new State of Libya – will officially take the power. Many fears an Islamic takeover, and others outline a more optimistic scenario. But everyone knows that nothing will be the same.

Estimates as to the number of Christians in Libya varyfrom a few thousand to 150,000. The minority Christian community consists largely of foreigner who came to the country to work, although some media agencies reported an exodus of Christians during the last nine months of conflict.  Sylvester Magro, the Catholic bishop of Benghazi, said he usually has some 10,000 Catholics in east Libya under his care, but was now tending to a reduced flock of a few hundred. Speaking carefully, he would not be drawn on hopes and fears for his congregation’s future.

The exodus can even increase, since International Christian Concern (ICC) has learned that Libyan intelligence officials have detained and tortured four Christians for converting from Islam.

The concern for the future of Christians played an important role in writing the Holy See official communiqué after Gaddafi death. Vatican said it recognized the Libyan National Transitional Council (NTC) and wished it success in starting a new government more than four decades after the deceased leader took power in a coup. «Given that the NTC is now acting effectively as the government in Tripoli, the Holy See considers it the legitimate representative of the Libyan people, in conformity with international law», the Vatican said in a statement. And Archbishop Dominique Mamberti, the Holy See’s secretary for relations with States, spoke with Abdurrahman M. Shalgham, permanent representative of Libya to the United Nations in September at the opening of the UN’s General Assembly. More recently, Archbishop Tommaso Caputo, apostolic nuncio to Libya based in Malta travelled to Tripoli for a 2-4 October visit during which time he met Mahmoud Jibril, prime minister of the NTC. «During these various meetings the importance of diplomatic relations between the Holy See and Libya was affirmed by both sides – the Vatican said – The Holy See renewed its support for the Libyan people and for the transition. The Holy See wished the new authorities every success in their rebuilding the country». Even msgr. Giovanni Innocenzo Martinelli, archbishop of Tripoli, said about one month ago that «we must back the rebels’ good intentions rather than take their words to extremes». A few days before Mustafa Abdel Jalil, president of Libya’s National Transitional Council (NTC), had held a speech in Tripoli. Speaking before a crowd of thousands of people, the NTC leader said the new state would be inspired by Sharia but would not move towards extremism.

There had been an increasing concern for the Christians’ faith during the Libyan war. The Christian church in eastern Libya, which traces its roots back two millennia to the era of Christ, is fighting for survival because war has forced nearly all its worshippers to flee. But Muslims in Libya’s rebel-held east are keen to show that Christians are still welcome, drawing a contrast with the Christian community’s turbulent history under Muammar Gaddafi, whose rule in the east was ended by mass protests in February. Gaddafi has repeatedly predicted the triumph of Islam over Christianity in the world and likens NATO states launching air strikes against his military armour to «colonialist crusaders».

Evidence of Libyan Christian communities has been traced back to the century following Jesus’s birth. According to three of the gospels, it was Simon of Cyrene – an ancient coastal city lying in the east of today’s Libya – who helped to carry the cross upon which Jesus was crucified.

Christianity became mostly a religion of foreigners when Islam swept through in the seventh and eighth centuries, kept alive by trader communities, many from Pisa, Genoa and Malta. The 1969 army putsch against King Idris that brought Gaddafi to power led to the confiscation and closure of churches and tight monitoring of religious practice. But the Libyan leader’s attitude to Christians gradually mellowed and Christians in Benghazi said they faced few challenges in recent years.  Gaddafi gave the Coptic leader Pope Shehouda a Human Rights award in 2003, and gave Copts four buildings to use as Churches for free.

Despite what will be the behaviour of rebels, Christians are worried of the possible growth of Islamic extremism pressures. U.S. counterterrorism and intelligence agencies have recently produced classified papers examining the strength, role and activities of militant activists and factions in post-Gaddafi Libya. Some assessments examine the backgrounds of anti-Gaddafi leaders with militant pedigrees, and explore whether these individuals, some of whom have publicly renounced Islamic militancy, will stand by their pledges against extremism.

During the campaign by rebels to drive Muammar Gaddafi from power, U.S. and NATO officials downplayed fears that al Qaeda or other militants would infiltrate anti-Gaddafi forces or take advantage of disorder to establish footholds in Libya.

Another worry is figures with a militant background getting into the higher echelons of the new Libyan government. One new Libyan leader under close scrutiny is Abdel Hakim Belhadj, a former Islamic fighter in Libya and Afghanistan who now commands post-Gaddafi forces in Tripoli.

After allegedly forging ties in Afghanistan with the Taliban and al Qaeda in the wake of the September 11, 2001, attacks, Belhadj reportedly was arrested with his wife by the CIA in Bangkok and later extradited to Libya, where he was imprisoned until 2010. He was released under a reconciliation plan promoted by Gaddafi son Saif al Islam. In an interview with the Al Jazeera website, Belhadj said he was subjected to «barbaric treatment» while in CIA custody and later to «many types of physical and mental torture» in Gaddafi’s notorious Abu Salim prison. Asked about his dealings with al Qaeda, Belhadj said: «We have never been in a relationship with them or joined them in any kind of activity because we could never come to an understanding of (philosophies)».

Christians in Libya are afraid that a takeover of the country by Islamic fundamentalists, should leader Moammar Gadhafi fall, would threaten their safety, said a Franciscan priest who has served in the North African nation for seven years. «Under Gadhafi, we’ve been protected», the priest told Catholic News Service. He asked not to be identified so as not to jeopardize his return to Libya.
The priest said he left Libya the day before a revolt against Gadhafi started in the eastern city of Benghazi. Because plans for the protest had been announced days beforehand, tensions rose between Gadhafi supporters and opposition leaders, he said. «I didn’t expect so much to happen», he said, referring to the rapid escalation of violence that left at least 300 dead and more than 3,000 injured. The uprising is the most recent and most violent in a tide of protests against autocratic leaders in the region.

Under the Gaddafi regime, the Catholic Church functioned more or less freely without much government interference. During that time, there had been relatively good relations between Christians and Muslims. Past signs of peaceful co-existence are indicated by the number of successful interfaith dialogue meetings mentioned on the official Libyan Roman Catholic website catholicinlibya.com.However, there had been some disruptions. In 2006, a small group of Muslim fundamentalist ransacked the Franciscan Church of the Immaculate Conception and adjacent friary.  The communities continued despite serious restrictions such as the prohibitions for Christians to proselytize Muslims, and the necessary conversion to Islam should a Christian wish to marry a Muslim.

Most Catholics in Libya are either expatriates or foreign workers coming from Italy, Malta, the Philippines or other African nations. Before the Second World War, Italy colonized Libya, which increased the number of Roman Catholics living there.

The large numbers of Maltese Catholics, mostly foreign workers, come from nearby the island of Malta, which represents the closest EU country to Libya. Both Italy and Malta have a vested interest in a stable and democratic Libya. A more democratic and prosperous Libya might help to stem the serious immigration crisis now touching the shores of both countries and throughout Europe.

Regarding the on-going conflict, Tripoli Bishop Giovanni Martinelli considers «the historical moment we are living in Libya today is full of suffering and dying people. We, Christians in Libya, are Christ’s small flock. Our very presence, our service still rendered in various Libyan institutions, our friendship in this trying time are all a powerful witness that the Church is serving the Libyan people in the Spirit of God, and a hope that Libya, and the Church in Libya, may soon be reborn out of the experience of suffering».

2 Responses to Libya, what future for Christian community?