Pope Francis, the commissioners as sentinels of the reform 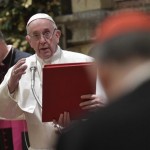 Three clues are said to make a piece if evidence. Therefore, the news of the third inspection ordered by Pope Francis in a Vatican dicastery in just over two months can reasonably be considered the expression of a particular way of working by Pope Francis. When a transition is ongoing, Pope Francis will appoint an inspector called to define and understand the work done in the dicastery.

It is unknown how long it will take for new heads of the Dicastery to Promote Integral Human Development to be nominated. However, it is known that Pope Francis has also called for an inspection team there, this time defined as “a team of evaluators,” led by Cardinal Blaise Cupich, archbishop of Chicago. Unfortunately, the Press Office of the Holy See did not mention the group of evaluators, which should be composed, in addition to the cardinal, by Sister Helen Alford, vice-rector of the Pontifical Angelicum University, and by Pier Francesco Pinelli, an Italian manager. He, in the past, has dealt with the very restructuring of the Dicastery.

The appointment of the commissioners suggests an ongoing transition in the Dicastery, which is now entering its fifth year of life. Established in 2016, the statutes of the new Dicastery were approved ad experimentum for five years, and now that period is almost over. We need a fine-tuning, because of the reform of the Curia, which should arrive in late autumn.

However, the appointment of inspectors does not seem to follow the simple logic of “accompaniment” in the transition. With the inspectors, Pope Francis is centralizing powers on himself and increasing control over the Vatican dicasteries.

Since Pope Francis was elected, he has often spoken about the need for collegiality and synodality. With his reforms, he has put a Church in a “state of a permanent synod,” as evidenced by the latest reform of the Synod of Bishops. At the same time, he showed that he developed collegiality by establishing the Council of Cardinals, then the commissions that initially had to oversee the reforms of the IOR and finance, then two study commissions on the female diaconate.

Pope Francis, however, then makes the decisions himself. He often convenes bishops, but he does so mainly to understand how they could deal with problems. The chronicles of private audiences with local bishops also mention chats on general issues, not on central topics. The Pope wants to get an idea of everything and the psychology of people. The manifest collegiality is a powerful centralization exercise.

Inspections are another aspect of this centralization exercise. Pope Francis is entering a crucial phase of his pontificate: not only will there be many changes at the top of the Curia (there are still four congregations whose prefects are over 75 years old) but there will also be this long-awaited reform of the Curia. Several times, Pope Francis has spoken of “resistance” to his reform project. It is a strong term. What the Pope calls resistance is often some reasoned objection, sometimes notes on the project.

The basic idea seems to be to dismantle everything and then rebuild it. However, the truth is that not everything needs to be dismantled, but instead be reformed starting from what is there, enhancing it. After all, the Church has always done this because to build has never been a matter of a short time. Furthermore, rebuilding is a very long job, and you lose the good that has been done.

Pope Francis, however, seems convinced of the idea of having to dismantle everything, starting with a mentality that he has always defined as something “sick” (remember the references to diseases of the Curia in 2014?). In this project, he is helped by those who previously lived in the shadows or felt on the margins.

Those who “resist” Pope Francis often point out the danger of this perspective, and this concern is interpreted as resistance to change. In these cases, Pope Francis acts as he has always done: outsources, entrusts the management to trusted people who come from outside and who, according to him, have no prejudices.

In this way, he strengthens control, shows a constant presence in every deal, puts everyone on guard. After this, he makes decisions. Even in a brutal way.

The decision to appoint Fr. Luigi Maria Epicoco “columnist” of the Osservatore Romano was strong. The appointment means that everything Epicoco writes will be considered mens papalis. But the appointment also creates a rift between the Pope’s newspaper and the Pope himself because it is the unsigned editorials that have always given the newspaper’s line: the Pope had never needed to nominate someone officially to write for him. After all, the newspaper is his, and so is the editorial line.

And the decision to “impose” the celebration of a national Synod on the Italian bishops was strong, in the face of various objections that also concerned the fact that the Italian Church already has its own path, and it is the path of ecclesial conferences. The Pope does not like that path because it perhaps reminds him of a past Church that is very present in society. So the change of mentality occurs with the evolution of terminology and the closure of the ten-year experiences.

The Pope’s idea is that we should not hide behind the “it has always been done this way.” This idea, however, risks throwing away years of positive experiences, dismantling everything without actually having built anything new. This is a complex problem to manage, especially for the Pope to come. Faced with countless “zero years,” while the propaganda shows as new even things that had already been done (aware that history has been forgotten) the next Pope will first of all have to rebuild the awareness of being Church. And he will then have to reform the structures. Not to change everything and not change anything, but to give new strength to a necessary structure which today, with this pontificate, is showing some cracks.