Pope Francis, will there be a meeting with Patriarch Kirill? How involved is Pope Francis in the London trial case?

Pope Francis, the guidelines of his reform 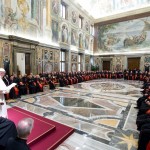 Published out of the blue, the apostolic Constitution that redesigns the Roman Curia is really not just an organizational change. Instead, it tells of a shift in philosophy, which must be fully understood. The risk is that, with the will to change, we will instead go back to past patterns. In fact, by losing sight of the historical role of certain bodies and departments, we also lose their meaning and soul. It can be a problem.

As it was known, the Apostolic Constitution is called Praedicate Evangelium. To summarize the novelties: there are 16 Vatican dicasteries, and they are all called dicasteries (therefore, the distinction between Congregations and Pontifical Councils ends); the dicasteries can also be formally led by a layman, except for the tribunal of the Apostolic Signatura; the Pope takes on the role of prefect of the Dicastery for Evangelization, which thus has two pro-prefects, dedicated to the new and the first evangelization; the Pontifical Almoner goes into what will be called the Dicastery for the Service of Charity; no top official, nor any cleric, may remain in the Curia for more than two five-year terms.

Many of the changes to the Praedicate Evangelium were already in place. Pope Francis had already established the dicasteries for the Service of Integral Human Development; Laity, Family, and Life; and Communication. The Congregation for the Doctrine of the Faith had already been reformed the way it is now described in the new Constitution. In many cases, the Pope had already not confirmed people in top positions who had remained in office for two five-year terms; and there was already a lay prefect, the prefect of the department for communication.

The devil, however, is in the details. And there are at least three issues that almost signal a return to the past.

The first is that the laity can take the leadership of any dicastery. During the press conference for the presentation of the Constitution last March 21, Father Gianfranco Ghirlanda, SJ, a refined canonist, said that this decision resolves the question opened by canon 129 on authority, which is attributed only to the ordained, while the laity collaborates in authority. According to Ghirlanda, the canon itself was vague because it resulted from a compromise. In this way, it is the canonical mission that provides authority and not ordination.

This position will be the subject of extensive discussion because the decision to link authority to ordination arises from the need to avoid ever making the bishop a function. Previously, a person could be appointed bishop even without being a priest because he had to administer a territory. Linking authority to ordination prevents any exploitation of power because everything starts from the divine mandate.

In canon 129, we read that lay members can cooperate, but this does not mean that they must assume authority. Even in the cases of the courts, the laity can be part of the courts only if there is already an ordained minister, and a cleric is testifying to this need.

It was, after all, the same principle that led John XXIII to decide that cardinals should be at least archbishops – the only dispensations are given to cardinals created over the age of 80, who no longer enter the conclave and who therefore do not have even administrative responsibilities.

Now, the authority is given by the canonical mission, which is conferred directly by the Pope. There was talk of decentralization. However there is a further centralization in the decisions of the Pope. The distance is very short from the iustum (what is just) to the iussum (what is ordered).

This centrality of the Pope can also be seen in the decision to be the prefect of the Dicastery for Evangelization. Until Paul VI, the Pope was interim prefect of the Holy Office, but it was Paul VI who decided otherwise for a healthy separation of powers and management. Cardinal Marcello Semeraro, in a press conference, explained that the doctrine of the faith was central in a period in which the Church was above all European. Therefore the greatest need was to keep the principles of the faith firm, rather than to spread them. Now, there is a need to evangelize, to have a more global vision, and that is why the Pope does for evangelization – which becomes the first Dicastery – what he once did for the Doctrine of the Faith.

As logical as the explanation may seem, it nevertheless hides a further centralization of the role of the Pope. He, among other things, had already taken over the interim of the Migrants and Refugees Section. In practice, the Pope does not delegate but formally puts himself at the head of all the dicasteries he has a particular interest in. In the end, he is a Pope king even when it comes to the Roman Curia.

That the Pope acts as Pope-king is visible in the approximately 40 motu propri published in these nine years of Pontificate, as well as in the rescripta often used to change the rules of the trials in the running – it happened in the current trial in the Vatican on the management of funds of the Secretariat of State. This return to the centrality of the Pope is, however, a step backward.

Until now, the Pontificate has always acted by subtraction. It did so already in the Middle Ages when the Pope often decided by consulting the cardinals in a consistory. Times have changed, cardinals can no longer meet so often in consistory. The Popes, however, have always tried to work in collegiality.

That of the Congregation for the Doctrine of the Faith was also a collegial work because everything, even disciplinary matters, was part of crimes against the faith. Now, divided into two sections, the Dicastery might have a less holistic approach to issues, with the risk that discipline will become more important than doctrine.

These are all signs that show how the reform risks, after all, having the opposite effect to what was intended. Bishops’ conferences are mentioned more than fifty times, synodality almost becomes an instrument of government. But then, there remains a Pope who decides personally, becomes prefect of a Congregation, and makes his charity bureaucratic.

Because Papal Charity has always been distinguished from a dicastery precisely because it was the Pope’s charity, there was nothing bureaucratic; it did not finance projects as did the Pontifical Council Cor Unum, which also had the responsibility of Caritas Internationalis (later passed to the Dicastery for Promoting Integral Development). The Almoner was part of the papal family, and he sat next to the Pope during state visits. Now it will no longer be like this.

These changes seem to be about issues of little substance or linked only to an ancient tradition. In reality, they change the essence of the institution itself. And one wonders if these changes will remain. Of course, it won’t be easy to have long-term plans if the office heads cannot stay for more than ten years. At the press conference, it was said that it’s not just two terms, that the heads can be always renewed. The Constitution, however, only mentions one renewal and not two. Thus, for a priest, a bishop, a layman who will lead a dicastery, the Holy See will not be part of a commitment, a mission for life. It will only be a bureaucratic interlude that is followed by the return to the diocese.

4 Responses to Pope Francis, the guidelines of his reform