Benedict XVI. Between Benedict, Bonaventure and Gregory. The release of IOR resolution is a milestone. Here is why

What is behind the Vati-leaks war? 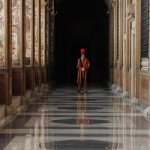 «If you bite and devour one another, take care that you are not consumed by one another». This passage of the letter of Paul to Galatians had been quoted by Benedict XVI in the letter he wrote to bishops concerning the remission of excommunication to four lefevbrist bishops is dramatically current in the Church today. Since the last Vati-leaks – represented by a book by the Italian journalist Gianluigi Nuzzi, Sua Santità (His Holiness) – does not only deal with a problem of internal security within the Vatican walls. Maybe the «leakers» are just «middle class Vatican clerks» that work within the Vatican City State and that are probably pushed by some higher level Vatican official. But the fact that they leak documents does not only attain with the violation of the privacy of the Pope and of the people whose correspondence has been published in the book. It also attains with the image of the Holy See, that has been victim of several campaigns against its «diplomatic» representation in the concert of nations. And that now – being the Holy See represented as a pyramid made up by an isolated Pope and a whole Roman Curia committed in biting and devouring one another – would risk to lose its diplomatic impact.

For what concerns the «privacy» matter, the Vatican has denounced as «criminal» the book by Gianluigi Nuzzi, made of leaked internal documents that shed light on power struggles inside the Holy See and the thinking of its embattled top banker, and warned that it would take legal action against those responsible.

The Vatican had already warned of legal action against Nuzzi after he broadcast letters in January from the former No. 2 Vatican administrator to the pope in which he begged not to be transferred for having exposed alleged corruption that cost the Holy See millions of euros in higher contract prices. The prelate, Monsignor Carlo Maria Vigano, is now the Vatican’s U.S. ambassador.

Pope Benedict XVI has already appointed a commission of cardinals to investigate the «Vatileaks» scandal, which erupted earlier this year with the publication of leaked memos alleging corruption and mismanagement in Holy See affairs and internal squabbles over its efforts to comply with international anti-money laundering norms. The group includes Cardinal Julian Herranz, president emeritus of the Pontifical Council for Legislative Texts; Cardinal Josef Tomko, prefect emeritus of the Congregation for the Evangelization of Peoples, and Cardinal Salvatore De Giorgi, Archbishop emeritus of Palermo in Italy.

The publication of the book «His Holiness» added fuel to the fire, reproducing confidential letters and memos to and from Benedict and his personal secretary which violated the Pope’s right to privacy.

Federico Lombardi, director of the Holy See Press Office, said in a statement  that the book was an «objectively defamatory» work that «clearly assumes characters of a criminal act». He said the Holy See would get to the bottom of who «stole» the documents, who received them and who published them. He warned the Holy See would seek international cooperation in its quest for justice, presumably with Italian magistrates.

Much of the documentation is fairly Italy-centric: the memos about a 2009 scandal over the ex-editor of the newspaper of the Italian bishops’ conference; the memos about a so-called «never-know-before dinner» between Benedict and Italy’s president; a 2011 letter from Italy’s pre-eminent talk show host Bruno Vespa to the Pope enclosing a check for 10,000 € for his charity work – and asking for a private audience in exchange; a chapter about the Vatican sovereignty that quotes the case of a past investigation toward the cardinal Michele Giordano, then archbishop of Naples.

Nuzzi proved a scant acknowledge of the Vatican, and he did not cheek all the facts. For example  there had never been a statement by cardinal Giordano claiming Vatican soverignty to avoid investigation – there is no trace of it in the archives of the Curia of Naples, no trace of it in the press correspondance. Nuzzi claims as «secret» a lunch – not a dinner, as he describes it in the book – between the Italian president of Republic Napolitano, his wife Clio and the Pope, and he interprets the memos of the Secretariat of State about the lunch as a «moral suasion» the Vatican would do on Italian government. Actually, the news of the lunch had been already wrote by Italian press, and it was part of a diplomatic courtesy the Vatican has with Italy. The struggle within Istituto Toniolo, the strongbox of Catholic University, had been widely covered by the press. And one should not be surprised about the memos the Pope got by Vatican Secretariat of State office before the lunch with Giorgio Napolitano, president of Italian Republic. In fact, the Pope gets memos from the State Secretariat whether he meets the President of Republic of any country, whether he meets the parish-priest of the smallest parish in the world. This in order to understand at the deepest level what is the situation is going to talk about. It is the praxis. When the president Obama went to visit the Pope, Benedict XVI got a memo from his State Secretariat. Holy See was peculiarly worried about the reform of United States Health Care of System, and about the pro-choice positions of the president Obama for what concerns abortion. So, the meeting had been focused on this topic, and – after the meeting – the Pope gave to Obama Dignitas Personae, the Instruction on bioethics of the Congregation for the Doctrine of the Faith. Obama commented: «Ah, what we have been talking before». This was not considered surprising, nor it had been described as a moral suasion.

In Nuzzi’s book, there are international leaks as well, including diplomatic cables from Vatican embassies from Jerusalem to Cameroon. Some of these cables concern the conclusions of the Pope’s delegate about Legion of Christ religious order. Even Ettore Gotti Tedeschi, the head of the Institute for Religious Works gets significant ink, with reproduced private memos to the Pope with his take on the Vatican’s response to the global financial crisis and how to handle the church’s tax exempt status amid Italian government efforts to crack down on tax evasion.

The question that lays beneath the «Vatileaks case» is: why so many document had been leaked to a journalist whose coverage of the Vatican is scant? It is very serious that papers that are sent to the desk to the Pope had been leaked to the press and in fact the last months had been marked by a sort of struggle among Italian newspapers, that competed in publishing the most accurate and itchy Vatican leaks

And Nuzzi himself, presenting his new book, explained that this was «a subsequent step» in the path he began with his first book, Vaticano S.p.A., in which he published leaks about the Vatican financial management. Nuzzi’s speaking about a «subsequent» step and the competition on Vatican leaks let understand that there can be a sort of strategy behind the Vati-leaks. Is journalism joining one party and accomplishing a peculiar strategy? And, moreover, what is the party Vati-leaker is joining? Is it a problem of an internal conflict within the Holy See? Is it a problem of a conflict between Holy See and the Italian Bishops’ Conference?

This is uncertain. There is no doubt  – on the other hand – that Vati-leaks came out by hostilities, personal disputes, power struggles that have little to do with the mission of the Church. So, the true question is another one: is who leaked the documents aware of the institutional damage suffered by the Holy See because of his leaks? In the end, it is the institutional weight of the Holy See that takes issue, and this would eventually strengthen the campaigns aimed to expel the Holy See by the concert of nations and to undermine its diplomatic weight by reducing its status to a Ngo.

In the mean time, the Pope is depicted as alone on a ivory tower while he goes on writing books and speaking about religion and faith, without any right to speak out about political and diplomatic issues.

This is how an internal conflict risks to become something bigger. Everybody is speaking well of the Pope, and badly of the Curia. But attacking Curia, attacking Tarcisio Bertone, Vatican Secretary of State – he is one of the main targets of the Vati-leaks – means now attacking Benedict XVI and his quiet revolution.

7 Responses to What is behind the Vati-leaks war?