Religious communities: not lawless areas, but spaces of freedom. The Church’s autonomy in four paragraphs. The Year of the Five Patriarchs: A Chance for Unity 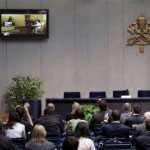 Much remains «to be determined» regarding the new appointments. The new director of Vatican Television is Msgr. Dario Edoardo Viganò. Until now President of the Ente dello Spettacolo (the Foundation for cinema and audiovisual communications of the Italian Bishop’s Conference) and director of the magazine Il cinematografo, it is likely that Viganò has been chosen to bring new (cinematographic) modes of communicating to the Pope’s TV, which is increasingly oriented towards documentary work, at the expense of straightforward broadcasting.

How will all of this change the Vatican’s internal equilibrium? Since Greg Burke (an Opus Dei numerary) was appointed advisor of the Vatican Secretariat of State, Lombardi’s weight and impact have seemingly been on decline. Lombardi continues to face the press in briefings and speaking with journalists. But he finds himself sidelined in some initiatives. For example, when a text by the Pope is published in the Financial Times (FT). The English newspaper –a temple of lay thought– printed the Pope’s text on page seven (and a brief introduction in the first page), thus treating the Pope’s piece as any other of its op-eds. The operation was also strange in other ways: the Pope’s text did not seem to be written specifically for the Financial Times, it was not original (long excerpts of the piece were taken from the most recent book by the Pope, Jesus of Nazareth, and the very same text had been previously posted on the English speaking website Maronite Blog four days before its FT publication). Lombardi had not been  alerted about publishing in the FT: when asked about it, he said that he had to ask for further information.

One Response to What’s the future like, at the Vatican media?