Ambitions for the Secretary of State position, behind pressures to abolish the IOR Pope Francis appointment of an advisory board raises expectations for reform

How will Pope Francis go about it? To start, by loving his enemies. 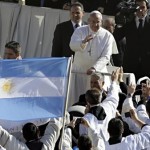 «Love your enemies». This seems to be Pope Francis’ most practiced gospel commandment recently. During this first month of Pontificate, Pope Francis received twice his compatriot Cardinal Leonardo Sandri, Prefect of the Congregation for the Oriental Churches, in order to see – sources say – how much time is needed to organize the trip to Jerusalem he promised at the very beginning of his pontificate. He also received Hector Aguer, Archbishop of La Plata, to be reported about the flood occured in La Plata; and he finally met with great cordiality in Domus Sanctae Marthae – his current residence – Cristina Kirchner, la presidenta de Argentina.

Too bad that there has always been bad blood between Bergoglio and Sandri, so straightforward and oriented to the poor the former, and so linked to an old «conservative» school the latter. Too bad also that Hector Aguer cordially detested Bergoglio, to the point of not ringing the bells in his diocese to celebrate Bergoglio’s election. And finally, too bad that Cristina Kirchner turned down meeting with Bergoglio 14 times when he, the archbishop of Buenos Aires, attacked her government’s policies in his homilies and speeches. The very same Cristina Kirchner who received Leonardo Sandri in Casa Rosada, Argentina’s executive mansion, last December.

After one month, the first sketches of his pontificate are appearing. But perhaps it makes better sense to first look back, to the history of the Church in Argentina, and gain another perspective. This will facilitate forecasting Pope Francis’ decisions.

Why did Jorge Mario Bergoglio said «no» to his possible Papal election in 2005? It was not just because of a sense of inadequacy, or simply not wanting to create havoc in the conclave by blocking Ratzinger’s election, who attracted a large number of votes from the very first ballot. It was also – sources say – because of his determination to bring to a close some pending issues in Argentina. Particularly, he wanted to bring to an end the case of the Banco de Crédito Provincial, which meltdown also involved the archdiocese of Buenos Aires.

In 1998, Roberto Marcial Toledo, private secretary of the then archbishop of Buenos Aires Antonio Quarracino, ends up in prison, in connection with the investigation over the bankruptcy of the Banco de Crédito Provincial.  He is questioned about $700,00 transferred from the archdiocese’s account to the Banco de Crédito Provincial. This transfer was not registered in the archdiocese’s  records.

It was not the first time that Toledo was named in an investigation regarding Banco de Crédito Provincial. In August of 1997, a scandal broke out concerning a $10 million loan extended by the  Sociedad Militar Seguros de Vida – an insurance company for military veterans – to the archdiocese, underwritten by the Banco de Crédito Provincial. When the BCP went under, the military veterans asked the archdiocese to return the money. The request is made on the basis of a document with Quarracino’s signature (to his death, he always denied having signed this document) and two $5 million checks signed by Toledo, who denied knowing anything about it. Military veterans and Church officials finally stopped accusing each other and dropped the issue.

That case shed light on the close relationship between the Trusso family – who owned the Banco de Crédito Provincial – and the archdiocese. The latter acted like a financial mediator in order to return to the Trussos one of the many favors they got from them, and to give to BCP an injection of funds to try to help its balance sheet.

It is during those years that Jorge Mario Bergoglio, already auxiliary bishop of Buenos Aires, is appointed coadjutor, i.e. auxiliary bishop with the right of succession. The appointment is precipitated by Quarracino’s illness, but also by the need to clean house.

Bergoglio takes on the challenge with determination, and begins to sell the archdiocese’s shares in several banks, in order to sever any inappropriate links with politics. The archdiocese’s funds and investments are placed in international banks and also the IOR (Istituto per le Opere di Religione), the Vatican’s financial institute. Angelo Caloia, then president of the IOR’s Council of Superintendence, and Lelio Scaletti, then general director of the institute, travelled to Argentina to help the local Church put in order its disarrayed finances and meet with Bergoglio, whom they find to be the «most authoritative of Argentinian bishops.»

By 2005, things are still not completely resolved. The «Bergoglio cure» helped the Argentinian Church to be more credible when criticizing the establishment, in the midst of a financial crisis that brought the country to its knees. But still some judicial pronouncements were pending, and some lose ends of the old scandals still needed to be cut.

For example, Francisco Javier Trusso (son of the head of the BCP) had remained in prison up until 2003. He was freed thanks to the intervention of Hector Aguer, archbishop of La Plata, described (in the Argentinian investigative magazine Página ½) as “a man of the Opus Dei”. Aguer paid the one million dollar bail to set Trusso free.

When Bergoglio was elected Pope, Aguer did not rejoice, did not have the bells of the archdiocese rang rejoicingly, and went into a long public silence. In a homily the Sunday following Bergoglio’s election, he did not emphasized Bergoglio’s election and said there was no need to have a sort of “soccer stadium celebration”  just because a fellow Argentinian was elected.

When Pope Francis appeared in the Loggia of the Blessings, Aguer could no longer expect that his own career would advance any further. Bergoglio has always been a hurdle to his promotions. In 1992, both Bergoglio and Aguer were auxiliary bishops in Buenos Aires. Aguer had been “requested” by Quarracino, Bergoglio was appointed by Rome. Aguer hoped to be Quarracino’s successor, but in the end Bergoglio took that post.

In 1997, Bergoglio was appointed coadjutor of Buenos Aires, and the year after Aguer was appointed coadjutor of the archdiocese of La Plata, and became its archbishop in 2000. Aguer maintained a close relationship with Esteban Caselli, known as «the bishop», who was Menem’s ambassador to the Holy See after Francisco Eduardo Trusso. Thanks to Caselli’s backing, Aguer was also appointed Conventual Chaplain of the Sovereign Order of Malta.

Aguer was also one of the favorites of Angelo Sodano, John Paul II Secretary of State. Sodano kept a strong influence on Latin America after having spent several years there as Papal nuncio. Sodano also had an enormous influence in Argentina thanks to Leonardo Sandri, another of his favorites whom he made his deputy at the Secretariat of State.

Sandri always considered his «teachers and models» Juan Carlos Arumburu (who ordained him as a priest), Cardinal Eduardo Pironio (one of the drivers of the World Youth Day), Quarracino and Francisco Primatesta. All of these prelates are considered – in the Argentinian public opinion – to have taken part in the sanctification policy of the Argentinian dictatorship.

Sandri shares with Aguer the friendship with the Trusso family. Aguer paid for Trusso’s bail, while Sandri hosted him in a house of his during his abscond, according to the book Nuestra Santa Madre by the journalist Olga Wormat.

The life paths of all these characters cut across the history of the Banco de Crédito Provincial. Toledo would explain to the judges that Francisco Eduardo Trusso, the father of Francisco Javier, «asked the cardinal [Quarracino] to speak with Menem in order to get the $300 million needed to save el banco, stating that since funds had been given to Beraja, why couldn’t he also get funds?» Rubén Beraja was the then president of the Banco de Mayo and of the Delegación de Asociaciones Israelitas  in Argentina.

(Aguer, Sandri, Caselli e Sodano comprised a virtually inexhaustible network of intertwined interests. Elected in the Italian parliament as representative of Italians overseas, since 2011 Caselli has been under investigation in Italy for a suspected electoral fraud. This did not stop Caselli from campaigning for his friend Sandri to be elected as Pope.

On the other hand, Sandri has been smart enough to maintain old and consolidated relationships, and at the same time has understood where the wind was blowing to. On the occasion of the 200th anniversary of Argentina’s independence, he celebrated Mass at the Argentinian Embassy to the Holy See, which is now headed by Juan Pablo Cafiero, a politician at the opposite end of the spectrum from Caselli.

Sandri’s name also came up also in the Vatileaks scandal. In the book His Holiness – where the Pope’s reserved documents were published, leading to the arrest of Paolo Gabriele, the Pope’s butler that leaked them – Sandri is mentioned as the possible author of the memo that lead Dino Boffo to resign as director of Avvenire, the Italian bishops’ news daily. The memo – published in 2009 in an Italian newspaper – mentioned that Boffo had been convicted of sexual harassment. It was a political attack that – according to the His Holiness  book – Sandri orchestrated.

If this was so, who did Sandri worked for?)

Bergoglio stood firmly against this network of business and interests. Will he be able to do the same at the Vatican? There are those convinced the answer is yes: Bergoglio will know what to do and how, and he will not be duped by Curia subtleness.

He will have to set aside the Argentinian mentality – there, the public debate is strongly polarized between so-called conservative and popular positions – and he will have to realize how crucial Rome’s centrality is. At the same time, Bergoglio will have to give a new impulse to the local Churches and bring Jesus to the peripheries, as he has said he wants to do.

A careful reading of Pope Francis’ story allows us to predict some of the decisions he could take during his pontificate. He will not abolish the IOR, since he is conscious of the need for financial independence, and of not being tied up because of shares and investments in other banks. He will create more «residential cardinals», leaving just a few of them in the Curia, faithful to the notion that a cardinal is a priest, and that a priest must be first of all a shepherd and only secondly a bureaucrat. And he will try to sow in the furrows left by Benedict XVI, who put the Church in order and left it ready to complete and do many things.

A question is still lingering: will Pope Francis be able to reinforce the Holy See international profile?

This will depend on who will be chosen as Secretary of State. Will Pope Francis choose to be prudent, welcoming the suggestion he recently got to appoint a pro-secretary of State until such a time that he identifies just the right person to appoint as the new Secretary of State? Or will he straightforwardly make a final decision more rapidly, as he did with regards to the appointment for the Buenos Aires archdiocese?

There, Pope Francis appointed as his successor Mario Aurelio Poli, 65, from 2008 archbishop of Santa Rosa and Bergoglio’s auxiliary bishops from 2002 to 2006. The choice – according to Argentinian sources – is the way Pope Francis has sent a signal to the many who yearned to succeed him as archbishop of Buenos Aires, like Hector Aguer.