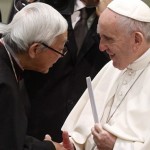 The news of the arrest of Cardinal Joseph Zen on May 11 came like a bolt from the blue. The Cardinal was accused by Beijing of collusion with foreign forces and arrested along with three other people who ran a fund to provide legal fees for those detained by the 2019 protests.

The arrest immediately seemed a show of force by former police chief John Lee, appointed governor of Hong Kong a few days ago. But it is also a strong signal that – after all – the motto of “one state, two systems,” which China said it would apply when Hong Kong returned to its control, is not something they can tolerate in Beijing and its environs.

Above all, the arrest appears to be a severe blow to the ongoing negotiations for the possible renewal of the agreement between China and the Holy See for the appointment of bishops. Or perhaps, it was simply a warning: nothing will change in China, not even with the agreement.

Just the fact that Cardinal Zen was even being considered for an arrest says a lot about how the Holy See is perceived in the country of the Red Dragon. Cardinal Zen is regarded as part of the old guard, an opponent who does not have much influence on Rome and whose arrest, therefore, would not have generated diplomatic problems.

After the arrest, the Holy See has made it known that it closely monitors the evolution of events. Naturally, since there are no diplomatic relations, it is challenging to resort to diplomatic responses. Sometimes, however, statements of a specific kind, such as the protest made public by the Secretariat of State for the expulsion of the nuncio to Nicaragua some time ago, would at least send a strong signal.

In situations like this, Pope Francis’ “fluid diplomacy” shows all its weaknesses. Pope Francis focuses more on personal relationships than on institutional diplomatic activity. For him, it is crucial to open processes, even if these can be painful. The agreement with China for the appointment of bishops was one of these processes.

The agreement was signed in 2018 and confirmed ad experimentum for another two years in 2020. The terms of the agreement are not known. However, it has been hypothesized that the Holy See is committed together with the government to revise the candidates to the episcopate until the Pope appoints a bishop who is also welcome in Beijing. However, the complete autonomy of the Pope in choosing bishops would be preserved in the agreement.

Cardinal Zen had been sacrificed on the very altar of this agreement. The bishop emeritus of Hong Kong has consistently opposed the idea of deals with China, noting Beijing’s constant violations of religious freedom. In October 2020, he had even been to Rome, persistently seeking a meeting with Pope Francis. The Pope did not receive him. Instead, he only had a brief encounter with Cardinal Pietro Parolin, Vatican Secretary of State.

In October 2019, Pope Francis sent a telegram to Hong Kong while flying over its territory to reach Japan. He had played down the telegram on the return flight, saying it was a courtesy telegram sent to all states. These were partially misleading comments because Hong Kong is not a state, but was appreciated by Beijing, so much so that Foreign Minister Geng Shuang had emphasized that “China values the friendship and kindness” of the Pope.

Not only. Pope Francis had flown over China and Taiwan on his itinerary to Japan. China was greeted as a “nation in the telegram sent to Beijing.” At the same time, greetings in Taipei were addressed to the “people of Taiwan,” although the nunciature in Taipei is significantly called the nunciature to China.

In July 2020, Pope Francis had also decided to omit a mention of Hong Kong at the end of the Angelus, at a delicate moment in which the agreement was being renewed.

They were all clear signals to China, which it appreciated. The agreement had been renewed as it was. But the deal did not bring great concrete results. Beyond the fact that all the bishops of China are now considered to be in communion with the Pope, there have been, in the last four years, only six nominations of bishops under the agreement, two of which, however, had already been foreseen before the China deal.

It is no coincidence that even Cardinal Parolin, Vatican Secretary of State, has made it known that he “hopes” to change the agreement. But the main obstacle seems to be the Pope, who wants to keep the agreement and who wants the agreement to be renewed as it is.

It is the fluid diplomacy of Pope Francis. In the closed door meeting with the nuncios in June 2019 (it is every three years, the next one will be in September of this year) the agreement was also discussed, and the Pope had overcome every critical issue by saying that he wanted to “open processes” and that he “loves China.”

But it is a kind of fluid diplomacy that reveals its limits. If not even a cardinal is considered in his dignity and formally defended by the Holy See, what are the agreements worth?

Of course, in the past, there has often been talk of the Holy See diplomacy abandonment of the bishops who were beyond the Iron Curtain, and from there comes all the criticism of the Holy See’s Ostpolitik. But a closer look shows us that the Holy See defended her bishops, sent harsh notes, and sought a dialogue precisely to save the priests in the area.

It could be said that nothing is different from the experience of China today. What is different is the Pope, who, in need to open processes at any cost, leaves aside any institutional and diplomatic reasoning.

It happens with China, and today with the Ukrainian scenario, where the fluid approach has resulted in making the Ukrainians unhappy and not having results in terms of dialogue with Russia.

Beyond the Pope’s desire to speak with the Russian aggressor (from the visit to the Russian embassy to the Holy See at the outbreak of the conflict, to the heralded intention to go to Moscow) the situation in Ukraine also shows a Holy See that seems to have lost all points of reference for the East. And China, in this scenario, is rubbing its hands, aware that it can take advantage of the situation.

The Holy See that emerges from the Pope’s declarations is incredibly weak. He is always a sole man in charge, always putting his person above everything. In the end, he fails to have an institutional and diplomatic approach that would allow, if not to find solutions, at least to have analyses that would enable us to look to the future.

A fluid diplomacy, precisely because it is based on personal feelings and personal relationships. Diplomacy, therefore, is not influential. The Pope is readily given the spotlight when he speaks of human fraternity, ecology, and sustainable development goals. However, the Pope is left out when it comes to the significant issues of the world. And this is also demonstrated by the arrest of Cardinal Zen, in a China where the Church seems to be left without actual points of reference.