Why a Third Section of the Secretariat of State? Pope Francis’s Ecclesial Realpolitik 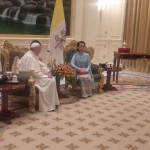 During his trip last week to Myanmar and Bangladesh, Pope Francis never used the word “Rohingya,” with the only exception of the private meeting he had with a group of them in Bangladesh. Cardinal Charles Maung Bo, the Archbishop of Yangon, suggested to him not to use the term for a simple reason: beyond the dramatic humanitarian situation, “Rohingya” is a word used for an ethnic claim, and using it risks generating further division within a thorny territory. The Cardinal, but also many observers, noted as well that the Rohingya were not the only minority enduring difficult times in the country. There are also Christian minorities with similar situations along with internally displaced persons. The Cardinal stressed the need is to promote unity in a country which is experiencing a difficult democratic transition.

Pope Francis also avoided using the word “Rohingya” in Bangladesh, although he kicked off his visit to that country with a strong appeal to the international community to solve the situations of internally displaced persons, and he praised Bangladesh for welcoming the “Muslims of the Rakhine State” – this is the accepted but controversial word for the Rohingya – who are unable to attain citizenship due to a 1982 Burmese law.

Pope Francis’s diplomatic prudence was noted and appreciated by everyone. The guideline followed was that of helping the process of dialogue, rather than advancing accusations. The latest Rohingya crisis came about when the Burmese government committed itself to respecting Kofi Annan’s commission’s recommendation that suggested a change in the law of citizenship so that the Rohingya could be granted citizenship. But while they lived in desperate conditions, the Rohingyas were infiltrated by Jihadist militants who attacked the army. The army reacted. Not a few observers think that this attack was orchestrated by the army in order to sabotage the outcome fostered by the Annan commission.

For this reason, Vatican diplomacy realized that it was important, on the one hand, to back Aung San Suu Kyi, who is working hard to carry on a democratic transition, and on the other hand, to dialogue with the military that is still ruling the country. In addition, the Pope needed to avoid using a controversial term the effect of which might also have been to put at risk the Catholic minority, because of the anti-Rohingya activism of some Buddhist activists.

This difficult bridge between these different positions was built in Myanmar by the tiny Catholic community, tiny but authoritative enough to be a reference point for everyone. The recent opening of diplomatic ties between the Holy See and Myanmar is a small victory for this Church that lives as a minority in a difficult situation.

Now, however, it is important to look back at history. Pope Francis’s great diplomatic prudence, carried out with carefully weighed words and some needed omissions, is not new for the Holy See. The Holy See has always been called upon to mediate between different parties, while above all defending the local Christian community.

Because of his considered diplomatic choices in Myanmar and Bangladesh, Pope Francis was described by some as a “diplomat and a prophet.” But how many other times has Vatican diplomacy acted in the same way?

The first revealing example is that of Pius XII, constantly targeted because of his alleged silences on the Jewish persecution carried on by the Nazis. It is however judged by many that this “silence” was chosen in order to protect people. While Pius XII made clear references to the issue of concentration camps in his 1942 Christmas Radiomessage, yet without explicitly mentioning the Jews, Jewish individuals were saved in notable numbers in convents and Catholic institutions as a consequence of Pius’s personal intervention – a rescue operation that led Golda Meir and Ben Gurion, mother and father of the State of Israel, to thank the Pope publicly.

Pius XII was well aware of risks. Angelo Giuseppe Roncalli, the future St. Pope John XXIII, met Pius XII on October 10, 1941, when the former was Apostolic Delegate to Turkey. Roncalli wrote in his diary: “[The Pope] spoke with me at length of his being cordial with Germans who visit him. He asked me whether his silence towards Nazism was badly judged. He showed a vivid interest in Greece.”

Pius XII’s intention was to combine great humanitarian activity with the silence that was no more than a way to preserve the future of the Church while the outcome of the war was still uncertain.

It was also because of diplomatic prudence that the future Pope Pius XII, Eugenio Pacelli, then nuncio to Germany, backed the Holy See’s agreement with Nazi Germany. Agreements are made with people you do not trust, and the mere presence of the Concordat — though Hitler often violated it – gave the Holy See some legal tools to defend itself from aggression.

After the Second World War, the rationale of “diplomatic prudence” was subject to questioning. In particular, the Vatican’s Ostpolitik received much criticism. “Ostpolitik” describes the “soft” Vatican policy toward the countries of the Soviet bloc, characterized by a series of agreements and concessions to Communist countries.

St. John Paul II came from Poland, a country of the Soviet bloc, and he considered Ostpolitik inept. He drove the Holy See’s diplomatic activity toward a clear denunciation of violations of religion freedom, and toward the fostering of a culture designed to erode totalitarian systems from their foundations.

However, John Paul II also had ocasion to resort to diplomatic prudence. During his trip to Chile, he leaned out of the balcony of the presidential palace together with the dictator Pinochet. That appearance at the side of the dictator was not planned; it was orchestrated by the Chilean regime in order to exploit the Pope’s presence and indicate that the Pope backed the government.

Could St. John Paul II have resisted? He could not. Immediately instead, the papal entourage organized an informal meeting with the Chilean opposition so that all the parties were involved and the Church’s presence was not manipulated.

To cut a long story short, in order to carry on the agenda of the common good, Vatican diplomacy makes use of diplomatic prudence as a fundamental tool. One can question, perhaps, whether this is always really prudence, or whether diplomacy sometimes capsizes the great issues of truth. However, balancing things is always difficult.

When today the alarm over a possible return of Ostpolitik is sounded, it is due to the fear that this Realpolitik brings with it too many concessions and leads to the loss of the Church’s freedom. In general, the ghost of a new Ostpolitik rears its head when there is talk about the way the dialogue with the Eastern Orthodox Churches has been carried on, or about a possible agreement with China over the appointment of bishops.

However, it needs to be understood that these issue are just a part of the Holy See’s global mission. In the end, one must not think that Pope Francis’s approach comes out of nowhere.

The Holy See bases its international profile on this diplomatic prudence, an approach that also affects the decision of how the Holy See takes part in multilateral organizations (sometimes as observers, sometimes as a member). And this is the reason why the Holy See is considered a “super partes” state, and is often called upon to conduct negotiations between states.

The commitment for peace is one of the significant aims that characterizes the Holy See’s posture in the world, and in this sense the Holy See shows its skill in mediations aimed at helping nations to avoid conflicts in cases like that of the Beagle Channel or the Carolina Islands.

The Holy See’s commitment is far more than that of an NGO, although international organizations often consider it like that, while they campaign at times to deprive the Holy See of its sovereignty.

In the end, the humanitarian channel is a fundamental, but not the only, tool for Vatican diplomacy; the men of the Church are first of all shepherds. And to be shepherds they must also be prudent in order to save their flock.

So, kudos to Pope Francis for practicing prudence in Myanmar and Bangladesh. But also kudos to Pius XII, John XXIII, Paul VI, John Paul II and Benedict XVI, because each of them, with different nuances, has practiced diplomatic prudence. They all acted in harmony with history, and each of them had to make concessions sometimes. But they never withdrew from the mission of the Church.