Pope Francis, on the footsteps of the unknown Pope?

By Andrea Gagliarducci On 8 settembre 2014 · 2 Comments · In Vatican 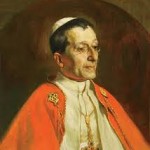 «The Church is proud of having sons like you. You are her strength and the concrete and authentic testimony of the Church’s salvation, forgiveness and message of love. I embrace you all, may the Lord bless you and always protect you.» At the end of the September 3 General Audience, Pope Francis directed his greetings to Arab-speaking pilgrims, «especially those who come from Iraq.» He was no doubt thinking about the persecution of Christians there. Perhaps many of them will not return to their homes, since they live in panic after the advance of the Islamic State.

The Church, however, is concerned about all human beings. Thus, the Pope’s message for the Iraqi population is a message for all persecuted peoples. A message which stands out even more because it was delivered  on September 3, the 100th anniversary of Benedict XV’s election as pope.

Elected on the eve of the First World War, Benedict XV’s is known mostly because of the note to the belligerent countries he delivered August 1, 1917. In that note, the Pope proposed a plan for peace, and described war as a “useless massacre.”

Benedict XV had dedicated all of his pontificate to the issue of peace, but his work is unknown to many, so much that his biography, written by John Pollard, is entitled “The Unknown Pope.” Yet, we should look at Benedict XV to understand how the Holy See diplomatic network developed, and how the network of humanitarian action was established.

Though Pius IX had promoted a culture of peace, and Leo XIII had proposed a policy for peace at the Conference for Disarmament held in The Hague in 1889, it was Benedict XV who clearly directed the Church to emphasize her commitment to peace.

The war had become «total» because of new technologies and weapons. The distinction between belligerent and non belligerent, civil and military forces, had ceased to exist in light of massive bombings and gas attacks. Benedict XV understood this, put aside the notion of just war and condemned the war “tout court.”

The theological basis for this condemnation is in Benedict XV’s first encyclical, “Ad beatissimi”.

«Jesus Christ descended from Heaven to restore among men the Kingdom of Peace overturned by the hate of Satan, and set as itsfoundation brotherly love. War comes just from the rejection of God and of His son Jesus, a rejectiondriven by atheism and by the resulting ideologies of hate and violence.»

These words find echo in Benedict XVI’s speeches – who selected his papal name thinking about Benedict the XV – and especially in his 2006 Regensburg lecture. There, Pope Ratzinger underscored that the divorce between reason and faith would lead to oxymoronically violent religions. Benedict XV’s words also find echo in Pope Francis’ teachings, who has chosen fraternity as the main focus of his messages for the World Day of Peace.

How can the Holy See carry forward Benedict XV’s commitment? Benedict XV was conscious that a juridical and institutional framework was needed, and this was the reason why he issued the Code of Canon of Law. At the same time, when the war finally broke out, the Pope realized that the Holy See did not have much diplomatic weight.

Benedict XV went beyond diplomatic activity, since he closely linked diplomatic with humanitarian action. The still current notion that the Holy See agenda is the promotion of the common good and that the diplomacy of the Holy See cares for hungry people, not just hunger– for people, not for themes — lies at the heart of Benedict’s XV vision and impact.

Thus, the late Pope inaugurated the prisoner-of-war works, spending the huge amount of 82 million of Italian liras of the time to advocate and facilitate that prisoners of war returnto their homes, civilian prisonersbe freed, and for prisoners who work in prison camps to be allowed torest on Sundays. The figures on the work on behalf of prisoners are impressive: 700,000 requests for information, 40,000 requests for repatriation, and 500,000 communications to family. Priests, bishops and nuncios were sent everywhere to aid prisoners. It is what Catholic charities and organization are doing now, also fostered by a reform of charity that is still ongoing and that will perhaps bring about the creation of a new Vatican institution.

All of Benedict XV’s effortsfind echo in his successors’ efforts for peace. Including in Pope Francis’, who – sending to Iraq his personal envoy with 1 million dollars of financial aid – is just carrying forward a papal tradition started 100 years ago.

Former Israeli president Shimon Peres appealed to this tradition. On September 4, he had a private audience with Pope Francis. «The United Nations is not working anymore, we have to establish a United Nations of Religions,» proposed Shimon Peres, seeking Pope Francis’ backing, even proposing the Pope as president, or leader, of this new organization.

Peres’ proposal brings to mind the “Parliament of  the World’s Religions,” born in Chicago in 1893 and that has already convened several times. In 1993, for its centenary, 8,000 adherents and representatives from different religions worked together to developa common “Global Ethics,” following a document mostly drafted by the controversial theologian Hans Kung.

A Parliament of Religions would risk to secularize the role of religions, and this is the reason why Nuncio Silvano Maria Tomasi underscored in an interview that some balancing is required. More than an organization of religions, the Holy See has pushed for a United Nations reform, toward a world authority with universal responsibilities able to voice the concerns of all the countries (not just the largest and wealthiest) and people and able to pursue the common good.

This approach also derives from Benedict XV’s diplomatic efforts. After the First World War, the Holy See was excluded from the peace talks in Versailles. Benedict XV foresaw in the heavy war reparations imposed on Germany a downward spiral to a new war. The Society of Nations as it was promoted by the U.S. president Woodrow Wilson could not function without a common ground.

This common ground was provided after the Second World War, with the Universal Declaration of Human Rights.  The Holy See and Catholic thought were the main enginesbehind the drafting of the Declaration. The former US ambassador to the Holy See Mary Ann Glendon has highlighted in her writings the impact of “Christian ideas” on the Declaration, ideas carried forward by some Catholic countries during the drafting of the documentand which echo the work of the missionary Bartolomé de Las Casas and the Catholic jurist Francisco de Vitoria.

The notion of a reform of the United Nations lies in the need to give a new impetus to human rights. This notion was conceived by John XXIII, embraced by Paul VI, carried forward by John Paul II, and backed by Benedict XVI.

The guidelines of the reform were based in respect for natural law, to be applied through subsidiarity. Everybody – nations, associations, individuals – was to be involved, in a constant conversation with the world. It was not an ethical or confessional approach. It was an approach based on reason. As we already stated, separating faith and reason may be dangerous.

Benedict XVI took it on, following the footsteps of his illustrious name sake predecessor. Benedict XV always referred to the revealed truth of God, basing on it his efforts to reinforce the institution of the Church, to lay the basis for a renewed and more active diplomatic network, and to support humanitarian missions. More than a society made of religions on a par, Benedict XV conceived a society enlightened by the love of God.

Pope Francis should share this conceptualization. Perhaps, he will raise this issue on September 13, when he will celebrate the Mass at the Military Sacrarium of Redipuglia, in northern Italy. There, where the memory of the victims of the First World War is honored, Pope Francis will pray that all wars end. He who uses prayer as a diplomatic tool is today called to carry forward a papal tradition started 100 years ago.

2 Responses to Pope Francis, on the footsteps of the unknown Pope?