Does Pope Francis have a communication strategy? 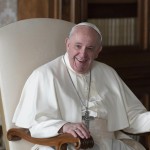 Pope Francis granted three interviews published this past week. One to Reuters, published in installments; one to the Telam agency; and one for the podcast of Guillermo Marcò, his legendary spokesman in Buenos Aires, who made a podcast of the Pope’s words.

Beyond the contents of the interviews, Pope Francis’ strategy is rather interesting. The more Pope Francis’ health deteriorated, the more he was present in the media. The more there was talk of the end of the pontificate, the more the Pope wanted to show, even with images and words, that he is firmly in command of the Church.

Perhaps we cannot fully trust the words of Pope Francis if it is true – as it is – that returning from Georgia on Oct. 3 2016, he said that he was going to choose the date to go and visit the places in central Italy shaken by an earthquake. The question was prompted by the fact that an Italian outlet had scooped that the Pope was going to go there on Oct. 4, so the Pope’s answer seemingly dismissed the possibility for him to go on the 4th. Then, on October 4, he was punctually there, as if he had never said otherwise (the Pope even made a list of possible alternative dates for a visit, saying that he just remembered the date of the first Sunday of Advent. Obviously, the Oct. 4 visit had been already planned and scheduled when the Pope was speaking).

However, these three interviews are part of a more complex plan, which must be understood and deciphered to understand and interpret the pontificate. What, then, are the themes underlying this communication strategy?

The first theme is that of reaction. Pope Francis does not like to talk about his succession, also because talking about the succession means, de facto, undermining decision-making force from the pontificate. Meeting with the Jesuits of Slovakia in September 2021, he complained that the cardinals had “already had his funeral” after the operation for diverticulitis on July 4, 2021.

The Pope reacts whenever he sees signs of people behaving as if at the end of a reign. When the French newspaper Le Figaro published the investigative article Fin de reigne pour Pope François, the Pope responded by standing up during the canonizations of May 15, personally going to greet everyone.

So, while rumors are circulating about a presumed tumor or his possible resignation, Pope Francis multiplies his public appearances, gives interviews, takes the opportunity to share his opinion on everything, and starts marking his legacy.

The second theme concerns the debate around the Pope. The reform of the Curia has materialized, but Pope Francis wants to take another step: a discussion with the cardinals. What better way than a consistory?

For the first time since 2015, the cardinals will meet to discuss and get to know each other. The theme will be precisely the reform of the Curia. But it will not be a meeting to propose a reform but a meeting to certify a reform.

Pope Francis has called it for August, thus freezing the debate. In the meantime, he uses public communication to convey the messages that he considers most important, confident that no one will then be able to oppose his ideas of reform.

The third theme concerns the need for Pope Francis to be popular. When he was in Buenos Aires, Pope Francis was media shy and very rarely gave interviews. But, as Pope, there are three weekly, plus the countless conversations and informal jokes full of meaning.

When it comes to giving his opinion, Francis never backs down. In these personal incursions in the media, there are no filters from the Secretariat of State.

The fourth theme concerns the communication of the Holy See. Pope Francis does not tend to unite but to create rifts. These interviews are often personal initiatives of the Pope and are done without filters and sometimes without the Dicastery for Communicattion knowing anything about them in advance.

In short, no one manages the communications of the Pope. It is the Pope who decides how and when to show himself. The dicastery’s task is to follow the magisterium and support the Holy Father. It cannot be that of communicative planning because the Pope makes the decisions in that sense.

After all, all popes have been kings. Pope Francis acts more like a guy alone in command, separate from any governing body. He does not want his health conditions to be known, and he does not want to hear that the succession is being prepared, so he is willing to take risks. He was even briefly taking twice as much medicine to appear healthy in public.

The interviews, after all, had the task of sending the message that the Pope exists, is present, and does not stop making decisions.

One Response to Does Pope Francis have a communication strategy?