Pope Francis, the problem of responding to abuses 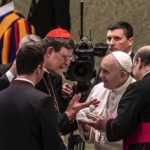 This week, two important facts concerning the issue of abuse have struck the Holy See. The first is that Cardinal Rainer Maria Woelki, archbishop of Cologne, began his spiritual retreat, practically suspending himself from the administration of the archdiocese until March. The second is that in France, a government report established that about 216,000 minors were allegedly abused in France by about 3,000 priests in a period ranging from 1950 to 2020.

The two news items are essential because they also show how the Holy See’s way of responding to abuses has changed. And they highlight some problems, which it would be wrong to underestimate.

Cardinal Woelki entered a spiritual retreat for six months, with a decision shared with the Holy See because – a statement from the nunciature explained – it was acknowledged that he had made a communication error. The storm against Cardinal Woelki began when the cardinal himself refused to report how his subordinates had handled the abuses. According to some consultants, the report had methodological flaws. The archdiocese then commissioned another report.

Pope Francis had also sent an inspection, led by Cardinal Anders Arborelius, bishop of Stockholm, to establish Cardinal Woelki’s possible responsibilities in covering the cases. It was established that there was nothing to be held against the cardinal. Indeed, the archbishop of Cologne had handled the cases well, without any cover-up.

However, it was decided to ask him to withdraw from public visibility for a while. The decision must be considered an attempt to shield Cardinal Woelki, who was hit by a shower of criticism. Instead of keeping the cardinal exposed to the media storm, it was decided to remove him from the fray and the center of attention.

It was a common-sense decision. But, in reality, the effect it had was quite different. First, there was the impression that Cardinal Woelki was punished for a communication error, and it is easy to link a communication error to a cover-up. Public opinion was free to speculate, in a negative sense, about the situation in the Church.

The same possibility of speculation was given to public opinion in France. The so-called CIASE report, commissioned by the French Episcopal Conference, is not based on a judicial inquiry but an estimate. It is based on complaints received by telephone, post, e-mail, and only in part on the archives of the dioceses and parishes.

The numbers, however terrible, must be put into perspective: this is 4 percent of the abuses that occurred throughout France in that same period, committed by 2.8 percent of priests. However, it is also important to reflect on the cult of denunciation that has been created.

Frightened by past mistakes, when complaints were not objectively heard, now every complaint becomes a truth that cannot be ignored. As a result, the alleged victims are found to be right before being proven that they have been abused.

Not only. The Church does not even have the right to speak. The CIASE report also proposed a sort of “suspension” of the secrecy of confession for cases of abuse to comply with French law, which provides for the obligation to report. This is not a new situation: by now, in the world, there are many states in which it has been proposed to abolish the secrecy of confession, from Australia to the United States. However, when Archbishop de Moulins-Beaufort, president of the French Episcopal Conference, stressed that the seal of confession could not be touched, the reactions were violent.

Summoned by Interior Minister Darmanin, Archbishop de Moulins-Beaufort came out with a statement that underlined the commitment of the Church of France to minors and stressed that his stances had been “clumsy.” Here, too, a total concession to public opinion, which, however, does not do justice to the truth of events.

That abuse is a drama and a crime, is a fact. However, it is suicidal to give up on telling the truth because of a sense of shame for the situation overall.

Pope Francis himself, at the anti-abuse summit he convened in 2019, noted that some used the abuse scandal to attack the Church. Therefore, every complaint had to be deeply considered and understood.

The problem is not the measures to be put into play, but rather the change of mentality. For years, there was no mention of abuses, and the local bishops did not report what had happened to Rome, moving the parish priests from parish to parish. And, as Benedict XVI explained in his letter to the Catholics of Ireland, there had been a mentality of mercy that had put aside the culture of justice.

Justice, however, also means knowing how to defend oneself when the accusations are unjust. But in recent years, the Church seems to have always given signs of surrender. Cardinal Philippe Barbarin and Cardinal George Pell cases are revealing: the two cardinals were unjustly accused yet subjected to a media pillory that had severe consequences (Cardinal Barbarin left the leadership of the diocese, Cardinal Pell spent more than a year in prison).

Indeed, the Holy See has always formally defended these prelates. It did so with Pell and Barbarin, and with Woelki too. Yet, the idea of an unfair, not very energetic way of acting has always remained, which has conceded too much to public opinion.

And the questions remain: will a mere communication error (judged based on what?) be enough to lead bishops to self-suspend themselves all over the world? Will a media attack be enough to ask cardinals to step aside? Will a negative public opinion be enough to force someone into prison or make them lose their job?

The challenge of abuse is played out in this context. Not on the measures, rigor, and on listening to the victims. It must be based on justice criteria.

6 Responses to Pope Francis, the problem of responding to abuses