Pope Francis wants to govern without the Curia. And possibly with an absent Secretary of State 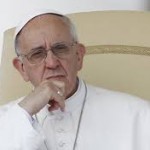 Prolonging the absence of a leader at the helm of the Secretariat of State also means pushing back the attention-seeking obsessive tendencies of Vatican officials and dicasteries, always ready to jump to center stage. At the same time, it seems that Pope Francis wants to go beyond the Roman Curia.

The Pope’s inability to bear a central government would come from his personal experience of marginalization. As a young head of the Province of the Company of Jesus, he was assigned to Germany (which he felt was like being exiled) to study for a PhD he never completed, and then called again to Argentina and assigned to teaching.

The decade of the 80s is a “vacuum” in Jorge Mario Bergoglio’s biography. In experiencing this exile and marginalization, he would have concluded that governments are merely power establishments,  and that reality is better grasped from the periphery.

This is how the assertive Jesuit became a bishop impatient with centralized management, one who takes upon himself all management responsibilities, because he thinks it is best to trust no one.

This exile, together with the experience of living the military dictatorship in Argentine, forged the character and the ideas of Jorge Mario Bergoglio. Perhaps he associates the Curia to the Province of the Company of Jesus which exiled him to Germany. As Pope, he paid homage to the late Jesuits General, Arrupe, by visiting his tomb at the “Casa Generalizia”, the Jesuits headquarters in Rome.

Yet Arrupe was one of the strongest “adversaries” of Bergoglio within the Jesuits, and some Jesuits have pointed out that, had Bergoglio not become Pope, he would have never gone to render honor to Arrupe’s tomb. This might have been the moment Bergoglio really internalized that he had become Pope.

Staying away from the Curia increasingly became “a must” for Jorge Mario Bergoglio (in fact he often did not attend the meetings of the Congregations he was a member of). Now, one of Pope Francis’ missions is to save the Roman Curia from itself. He does not want special events to take place at the Vatican. Not even the Curia’s traditional spiritual exercises of Lent will be held as usual in the Vatican’s Redemptoris Mater Chapel this year.  Instead, they will be held in Albano, Rome. The exercises will be lead by Fr. Angelo de Donatis, a simple priest.

As much as Francis wants to go beyond the Curia, someone will still be needed to run the Curia. Someone who, at the very least, can handle rumors and anxieties at the Secretariat of State. Pietro Parolin is someone who would probably take on this difficult task.

Parolin’s task will not be just about getting a new handle over diplomacy and downplaying general affairs. He must also, most importantly, give a direction to the government to the Holy See.

Pietro Parolin will not be a vice-Pope. Certainly, he will need to protect himself from pressures coming from all directions.  And he will also need to reign in those who vie for recognition and merits since the arrival of the new Pontificate.

A sign of the complete anarchy reigning within the Vatican Walls is the last small reform of Vatican Finances, regarding the Administration of the Patrimony of the Apostolic See (APSA). The reform was announced in a press release by the APSA, which the Holy See Press Office circulated in a bulletin different from its own bulletins.

The press release announced that APSA had started the “due diligence” process, hiring the Promontory Financial Group (already contracted by the IOR) for this purpose. Due diligence is the “evaluation of risks” in investments and loans, particularly with regards to the clients in a bank.

Yet, even if APSA is usually described as a sort of central bank, it is not a bank. When the evaluators of the Council of Europe Committee of MONEYVAL asked the Vatican about APSA’s activities, the Vatican explained that APSA has some accounts, but that its banking-type activity is minimal (they have only 23 accounts, 15 belonging to clerics and 8 to laymen) and that a process to close this banking-type activity started in 2001.

The same issue arose when the Institute for Religious Works (known with the Italian acronym of IOR) issued its Annual Report, as banks usually do. The IOR is often described as the “Vatican bank” or the “so-called Vatican bank”, although the Vatican has always pointed out that –and explained why– the Institute is not bank. The report could confuse public opinion. If the IOR puts into practice everything requested from a bank, the debate about the nature of the Institute is somewhat “suffocated” from the beginning. Does this ambiguity help the Holy See’s mission?

Hardly, judging from the way the Holy See operates in the European and the international arenas.

The Holy See strategy was that of creating a customized financial model for the Vatican (where there are no banks or markets). One that would adhere to international standards while maintaining the Holy See’s “special kind” of sovereignty.

Neither the APSA nor the IOR seemed to be aware of this. They appear to want to act solo, without coordinating with the “central government” of the Church, in order to show the world that a path toward transparency has began. This behavior earns a lot of publicity to the IOR’s President, Von Freyberg, and elevates the image of the APSA (as well as the profile of external agencies, like Promontory, despite the fact Vatican officials are doing most of the work).

There is something worth noting about APSA. Cardinal Attilio Nicora had been for years president of this Vatican dicastery, until he had to resign, since he was also president of the Authority for Financial Information. Nicora’s conflict of interests (he was at the same time president of both a controller body and a controlled body) was the only issue underscored in the July 12 MONEYVAL report. But Nicora always kept control over the APSA, which he considers a creature of his. Most of the APSA moves are inspired by Nicora, anxious to take center stage once more.

In the meantime, “second tier officials” rose in importance within the Vatican, but it is hard to know on whose recommendation.

One of this second tier characters is Ilson de Jesus Montanari, an employee with a rank of second class secretary who has suddenly been catapulted to the number two position at the Congregation for Bishops. A Brazilian and young, Ilson is rumored to be a close friend of Msgr. Fabiàn Pedacchio Leaniz. Pedacchio is the Pope’s personal Secretary, but still serves as an official of the Congregation for Bishops, where he was sent by Bergoglio in 2007 (Pedacchio had been Bergoglio’s eyes on the Curia for several years).

It was Giovan Battista Ricca who introduced Ilson to Cardinal Bergoglio. Ricca, it seems, backed Ilson’s appointment. Ricca was the director of the House of Clergy in Via della Scrofa, where Ilson used to live and where Cardinal Bergoglio used to stay when he came to Rome.

Ricca was appointed by Pope Francis prelate of the IOR. As soon as the news of the appointment spread out, the vaticanista Sandro Magister published a leaked document about a homosexual scandal which involved Ricca when he worked in the Papal nunziature in Uruguay. The documents accused Ricca of being “the prelate of the gay lobby”, which is how Magister headlined his article. Was also Ilson part of a the gay lobby as Ricca was accused to be? Was he only part of the small circle of friends that rose around card. Bergoglio when he was cardinal? This kind of speculation is often rumored in Vatican corridors.

Finally, one of Pope Francis’ most recent appointments is food for thought. Fernando Vergez, Legionary of Christ, General Secretary of Vatican City State, will receive the title of bishop. Pope Francis (somewhat belatedly) announced this decision with a long and unusual letter to Cardinal Giuseppe Bertello, President of the Vatican City State government.

In the letter, Pope Francis explains that the General Secretary of Vatican City State should focus on pastoral duties and the care of the souls of all at Vatican City State. So, while Vergez will be a sort of “bishop of the Vatican parish”, Bertello is charged with management, thus increasing his power.  It is also the Pope’s intention to entrust Bertello with the coordination of the Curia’s general affairs.

The upcoming ordination of Vergez as archbishop is a good development for the Legionaries of Christ. Vergez’ mother was one of the women in the close circle of Marcial Maciel, the founder of the Legionaries who lived a double life: that of a respected founder of a Congregation full of vocations; and that of a drug addict who had love affairs with several women, at least three illegitimate children, and who abused his seminarians.

The secretary of the late Argentine Cardinal Eduardo Pironio and a respected and active member of the Legionaries of Christ, Vergez distanced himself from the founder of the Congregation at the right time, when the rise of Legionaries of Christ was going to come to an end because of the process instructed by the Congregation for the Doctrine of the Faith lead by Cardinal Joseph Ratzinger. Vergez reportedly testified that the Legionaries statutes approved by Pope John Paul II were not those the Congregation really applied. This is how he was awarded a post in the Vatican City State government. From there, he was catapulted to the number two position at the Vatican City State government.

Vergez’s promotions will presumably help the image of the Legionaries of Christ, which is preparing its general chapter in March and that is ever losing more “freshmen”. The Legionaries of Christ and its traditional supporters, like Secretary of State Emeritus Angelo Sodano, can thank the Pope for this opportunity.

Ultimately, Pope Francis clearly stated that he felt nostalgia for the Curia man of the old days. After the promotions of people presumably part of a gay lobby (and can this not be but a strategy to keep everybody under control?), and his preference to govern without the Curia as much as he can, Pope Francis keeps on going his own way.

Yet, a signal to Parolin has been given. The Pope said Parolin need not worry too much about his new job. Parolin’s importance is not considered pivotal, as evidenced by the Pope not waiting one week for Parolin to get well before officially inaugurating the new Secretary of State’s term in office.

4 Responses to Pope Francis wants to govern without the Curia. And possibly with an absent Secretary of State