The informal Papacy and the risk of a lack of institutionality Pope Francis wants to govern without the Curia. And possibly with an absent Secretary of State 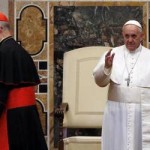 Next Oct. 15 the awaited change at the top of the Vatican Secretariat of State will take place. Tarcisio Bertone will leave his post to Pietro Parolin, who had been Bertone’s number four until 2009. That year, Parolin was promoted archbishop and sent as Papal nuncio to Venezuela.

The change is awaited for two reasons.

First,  under Benedict XVI’s pontificate, Cardinal Bertone’s management has been continuously under attack. Looking back, the attacks against Bertone do not seem to be attacks against the Secretary of State personally. They rather represented an attack against the way Benedict the XVI governed, a way that Bertone faithfully followed. Attacking the Pope is never simple. However, creating a distance between the Pope’s actions and those of his closest collaborators can be particularly effective. Setting aside mistakes and character ideosyncracies (which are to be expected), that is what in essence has happened in the last the eight years.

Second, there is an eagerness to see what orientation Pietro Parolin will give to the Secretariat of State.  Until now, with an outgoing Secretary of State continuously under attack, many have been maneuvering to expand their own influence.  And this has led to a paradoxical situation.

Piece after piece, Benedict XVI changed men in key positions. Not the men at the top, but those behind the scenes whose work included drafting documents and speeches that could shape the Church or have an important and visible impact on the world.

When Benedict XVI stepped down, leaving the house in good order, there were a series of key men in the key posts and a strong institutional framework.  However, the Roman Curia was not able to govern the conclave, cardinals splitted in several groups, and in the end a completely different vision prevailed and brought about the election of Pope Francis.

Now Pietro Parolin must deal with a Curia with valuable men (often under-appreciated, because there seems to be a tendency to think that outsiders’ perspectives are more important than what people within the Church think) and with a pope very focused on pastoral activity and much less attentive to the institution. This has led to a sort of “institutional malaise,” a confused state of affairs resulting from the absence of a guide at the Secretariat of State.

Pietro Parolin is expected to bring the Curia’s anarchy to an end. What will be the vision of the new Secretary of State?

Angelo Sodano’s Secretariat of State (1991-2006) further developed and strenghten a privileged relationship with Italy, truthful to a well-established Holy See tradition. The Vatican has always been in good neighbours’ terms with Italy, which is not surprising considering that prior to 1978 all popes had been Italian.

That of good neighbour relations with Italy was an old way of prioritizing. In the meantime, the European Union became a reality, as well as the interdependence among States, and no country found it convenient to rely only on bilateral and privileged relationships. The world became multilateral. Once upon a time it was all about men of compromise, specialists of the Vatican-Italian dichotomy and border, able to develop  that all-important good relationship. These men are history now, in part because the Vatican’s borders are no longer with Italy, but with the whole of Europe.

Bertone’s Secretariat of State (2006-2013) was more focused on multilateralism,  better positioning the Holy See in the international arena and decisevily giving its activities a strong impact and weight.

The vision was that of the Holy See as a State among States, which shares with them rights and duties, defends its sovereignty (with its ideosyncratic peculiarities) and applies it to advance her mission to pursuit the common good. The common good is the Holy See’s international agenda.

Parolin will have the challenge of maintaining the international profile Benedict XVI gave to the Holy See, and at the same time be very careful with people who want to gain power and influence again even at the expense of tearing apart the Holy See from within the Vatican Walls

What will Pietro Parolin do? Will he carry on upholding the Holy See’s international vocation? Or will he go back and nurture the “privileged” relations with Italy? Will the Holy See take a step forward or a step back?

It is not an easy task : to support an ambitious international vision, while managing competition for  immediate local influence and status. Parolin will not easily find a balance between these two “poles”. If he succeeds, and Pope Francis is able to carry forward Benedict XVI’s project, Parolin will be a great Secretary of State.

2 Responses to Bertone exits, Parolin enters. What will change?