What if Pope Francis would dismantle the former Sant’Uffizio? The informal Papacy and the risk of a lack of institutionality

The Return of the Curia of the old days 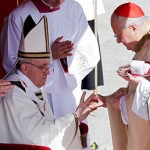 It was an era dominated by Angelo Sodano, who became the Vatican Secretary of State in 1991. Before that, he was a papal nuncio in Chile, from which he exerted his influence over Latin America. With the “struggle against” Liberation Theology as background, Sodano built a network of Papal nuncios and bishops. While the Congregation for the Doctrine of the Faith issued two instructions trying to shed light on the positive aspects of Liberation Theology (yet focusing everything on the salvific truth of Christ) the Latin American Bishops’ Conference took an increasingly harder line against the most prominent Liberation theologians, thus creating a gulf which might have contributed to an hemorrhage of the faithful. Many of this faithful found a new home in the Pentecostal ecclesial communities.

Such developments can take place whenever ideological rivalries fail to appreciate nuances, and criticism does not come with proposals to build something new.

Angelo Sodano was called to head the Vatican Secretariat of State in a peculiar moment. After the fall of the Berlin Wall, the Church – thanks to John Paul II – gained international weight. There was also a certain self-confidence in the notion that the world would listen to what the Church had to say, now that the propaganda of the Communist enemy had dissipated.

Sodano took advantage of this propitious time in the Church. He reinforced his influence over diplomats; he endorsed, lobbied for and promoted bishops and nuncios he knew very well, making them beholden to him for this support.

There is a whole generation of nuncios, diplomats and bishops who owe their rise to Cardinal Sodano. The Secretary of State also had splendid political rapports, developing a special relationship with Italy that still influences Vatican mentality today. Sodano’s brother was a politician who died after being held in prison as part of an investigation over secret funds. During the homily at his funeral, Msgr. Poletto, then bishop of Asti, lashed out against the prosecutors.  Sodano’s gratitude propelled Poletto toward getting the berretta rossa as Archbishop of Turin.

The star of Jorge Mario Bergoglio starts rising in the 90s. Card. Quarracino, Archbishop of Buenos Aires, got him out of anonymity in 1992 and requested he be appointed as co-adjutor bishop (with the right of succession) in Buenos Aires in 1997.

It is hard to see what is that Jorge Mario Bergoglio has in common with Latin American bishops raised under Sodano’s wings. Sources speak about tense relations. Bergoglio – they say – always maintained positions that were the opposite of that of conservative bishops. Bishops that were not close to the people. The face-offs between him and Sandri were frequent. The two are said to hate each other almost viscerally.

Yet, when Sodano, as Dean of the College of Cardinals, celebrates the Missa Pro Eligendo Romani Pontifice (the Mass that precedes the opening of the conclave), the homily seems like an specific endorsement of Bergoglio’s character. Sodano took note of the prevailing winds and anticipated the cardinals’ move. Sodano spoke of mercy and of reaching out to the peripheries of the world. Looking back, each word – and in the Vatican, nothing is accidental – seems to be a clear endorsement of Pope Francis’ views.

About Pope Francis, everybody knows that he is a decision-maker, and that he is used to do everything by himself. Yet, he does not like to be isolated. He lives at the Domus Sanctae Marthae, and many people try to speak with him. They maintain that the Curia does not work anymore, that the Vatileaks scandal came about because of Bertone’s poor leadership skills. They also underline that the old Curia was better, because, yes, Sodano headed it, but the project was functional. They are also probably assessing Pope Francis’ wish – and the cardinals’ request – to give more authority to the periphery, taking it away from the Curia.

The result is the return of the diplomats to the Church’s management positions. Obviously, not all diplomats are Sodano’s men. For example, Msgr. Pietro Parolin, Secretary of State elect, was raised under Card. Agostino Casaroli’s wings. But even then, he served in Sodano’s Secretariat of State for about ten years: will he be able to resist being influenced?

Msgr. Lorenzo Baldisseri has been appointed General Secretary of the Synod. He is a nuncio, and was most recently posted in Brazil, where he signed the agreement between the Holy See and Brazil. Beniamino Stella is the new Prefect of the Congregation for the Clergy, a nuncio who worked in Cuba and South America and that has been managing the Ecclesiastical Academy for the past six years. What are his qualifications to be in charge of global clergy issues? In the Vatican, it is said that he nearly turned the Ecclesiastical Accademy (the school for Vatican diplomats) to a seminary, because he felt so strongly about the prerogatives of priests.

There are other telling signs that the return of the diplomats is taking place. On Sep. 26, at the annual feast of the Vatican Gendarme Corps, Commander Domenico Giani praised Dean of the College of Cardinals Sodano effusively, almost to a fault.  Bertone – who is still the Secretary of State – did not speak a word, unlike in previous years.  Sodano is ever  more present and respected by Vatican officials.

Despite differences about theology and Doctrine, Sodano has emerged as the only one who has a good grip of the Vatican’s organizational leverages.

Perhaps the Curia reform that Sodano sought before the death of John Paul II will again be taken into consideration. To perpetuate his influence, Sodano proposed a plan which streamlined the Roman Curia. It called for having just six or seven congregations, and to consolidate the Pontifical Councils in them. He also foresaw a council of cardinals in which the Secretary of State Emeritus could have a seat. This would have enabled him to officially exert a great deal of influence. Not accidentally, as soon as rumors of a Curia reform circulated, the media talked about a “Council of the Crown” around the Pope. It was that old project made current again. Will the men of the old Curia thrive, even if this old project is implemented?