Pope Francis and the institutional issue Pope Francis, looking beyond the scandals

Fratelli tutti: likes and dislikes of the encyclical of Pope Francis 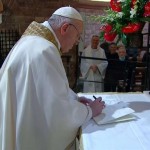 When the late Israeli president Shimon Peres visited Pope Francis six years ago to promote the idea of a Parliament of World Religions, the Pope took his time to think about it. There was a risk to “secularize” religions and treat them as a political tool. Instead, Pope Francis liked the idea of making fraternity a fundamental notion. The United Arab Emirates promoted the idea and worked it out along with the Sunni institution al Azhar. The Pope’s latest encyclical, “Fratelli tutti,” is born out of this idea.

Signed and to be released on St. Francis’s feast day, October 4, the encyclical epitomizes Pope Francis’ thought. Its 288 paragraphs (including the final prayer) contain a bit of everything: from Pope Francis’ idea of good politics to the issue of xenophobic and nationalist trends, from the throwaway culture to the globalization of solidarity, and from the need for forgiveness and reconciliation to social justice.

Five years after Laudato Si, Pope Francis is issuing a new summary of his social thought. He came up with the idea after he signed the Abu Dhabi Declaration on Human Fraternity on February 4, 2019 – a declaration that became for him a diplomatic tool. The Pope further developed the encyclical during the time of the lockdown because of the pandemic. Pope Francis drafted the document also thinking about the world after the coronavirus.

As with every document by Pope Francis, the encyclical might be divisive. Everybody will agree on some parts of it; everybody will disagree on other parts of it. Pope Francis’ style casually alternates from theoretical notions to pragmatic solutions. Pope Francis loves to say that the whole is greater than any single part – one of the key principles of his 2014 exhortation Evangelii Gaudium.

How will this encyclical be received then?

People will like the encyclical because it provides an answer to the big social themes of today. Pope Francis is not afraid to stand up and speak up in the public arena, sometimes from the perspective of the local Bishops conferences’ documents.

Fratelli Tutti is the second social encyclical in five years, a rather unique case in Church history.

In the encyclical, Pope Francis speaks about good politics, calls for an end to the polarization between those swept by populism and those against it, and stresses that the notion of people is mythological. Pope Francis also emphasizes the importance of taking care of the weak, and points the finger at international figures and organizations that forget marginalized people.

However, the encyclical will be appreciated because the Pope recognizes that the human conscience is in crisis and distanced from religious values. The Pope also asks to keep in mind that a fraternity exists only if there is an opening to everyone’s “Father.” To explain this, he quotes John Paul II’s encyclical Centesimus Annus: “If there is no transcendent truth, in obedience to which man achieves his full identity, then there is no sure principle for guaranteeing just relations between people.”

On the other hand, “Fratelli Tutti” might lead to contrasting reactions. There is a reference to the open society that can be interpreted as a backing of George Soros’ theories. Some people will also object to the absence of a solid theological mindset, although the Pope provides all the right quotes and draws most of them from Papal documents.

The theme of fraternity needs a framework that goes beyond the acknowledgement of a common Father. The word “fraternity” needs to be purified from all its anti-Christian nuances, dating back to the French Revolution taking it over and secularizing it. There is nothing about that in the encyclical.

The encyclical will be disliked because it appears to be biased toward a point of view. Not that the other popes did not take strong positions in their encyclicals. However, Fratelli Tutti appears to lack a grand vision, a broader perspective.

It is, in the end, an encyclical made at Pope Francis’ image. The Pope knows how to be straightforward on some issues, but he can also have an open dialogue attitude, especially when it comes to making public decisions. Paradoxically, his need to lay bridges at any cost can be counterproductive.

The poles of the debate on Fratelli Tutti are then foreseeable. This encyclical will likely be the litmus test of the pontificate.

In Fratelli Tutti, Pope Francis has put together his thought and combined fragments of many of his speeches. The encyclical is a declaration of his modus operandi. He collects the pieces of a puzzle and completes it, confident that the whole is more than the part.

Fratelli Tutti is not, then, a design for a future world. It is mostly the declaration of what Pope Francis would do. The transcendental part is there, but differently: it is not anchored on theological discourse; it connects with life.

Fratelli Tutti will undoubtedly be a controversial encyclical. Most likely, it will be less groundbreaking than Laudato Si, which presented a central topic, the care for the common home. However, Fratelli Tutti will be a must-read to understand the pontificate. It is the legacy of Pope Francis. This legacy consists of three documents: the program of the pontificate with the exhortation Evangelii Gaudium, the development of the program in Laudato Si, and the final summary in Fratelli Tutti.

One Response to Fratelli tutti: likes and dislikes of the encyclical of Pope Francis