Is Pope Francis Leaning Toward The Establishment Of An Informal Permanent Council? 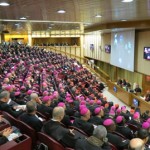 The most recent proposal floating is that of creating a Congregation for the Laity. After all – Cardinal Oscar Andrés Maradiaga has maintained – there is a Congregation for the Clergy and one for Bishops, but there is not one for the lay people, who are the biggest part of the Church. There is also a lot of talk –recently Cardinal Errazuiz Ossa raised it as well– about a reform of the Secretariat of State, which could be renamed the «Pope’s Secretariat» and would be something less than the coordinating body it has been until now. At first sight, none of these proposals is really close to Pope Francis’ heart, as he has clearly said that «the reform of attitudes is more important.»  The Pope has also asserted that he aims to achieve broader synodality among all the ranks of the Church.

A Vatican official told Mondayvatican Oct. 30: «More than a consistory for the creation of new cardinals, I have the impression that this will be mostly a sort of synod of cardinals. It will represent a new way to offer advice, with cardinals from all over the world, giving everybody the opportunity to share their opinions. It will be something very similar to the CELAM assembly, which the cardinals in the group of eight have clearly said inspired their thinking about a reform of the synod of bishops.»

Cardinal Maradiaga is the coordinator of the group of eight cardinals, while Errazuiz Ossa is one of its most influential members. With more frequency in recent times, Maradiaga has expanded on his ideas about the Curia reform. He has also raised the reform of the IOR (the Institute for Religious Works, the so-called Vatican bank), although it is not part of the curia reform. He has shared with the media many details about what he thinks these reforms should entail.

That of the Congregation for the Laity is his most recent proposal, and some Canon law experts, as well as committed layman in the Catholic Church, have received the idea with skepticism.

Internal pressures and opposition, the need to find a balance between his men and the «system», and the Curia’s very strong old guard headed by the former Secretary of State Angelo Sodano (still very influential, also with the press) led Benedict XVI to renounce to redesigning the Curia.

Realizing that an overall reform would take too long, Benedict XVI opted for a different approach, one attracting less attention but even more challenging: to anchor everything strongly on Doctrine,  develop a solid juridical-legal framework, and to aim for a change in attitudes.

Benedict XVI implemented the reform of the criteria of admission to seminaries; the global reform of Vatican finances; the reform of the Penal Code, which has gone into effect under Pope Francis; the new constitution of Caritas Internationalis; the motu proprio about Catholic charities; and the reform of discipline in seminaries, which are now under the administration of the Congregation for the Clergy.

Pope Francis’ project seems to be of a different kind. More than consolidating pontifical councils and thus streamlining the «consultative» dicasteries, it seems that he aims at integrating the pontifical councils within the congregations, even by elevating some pontifical councils to the rank of congregation. It is rumored that the confirmation of the leadership of some Vatican dicasteries in their posts, until the expiration of their mandates, supports this hypothesis. This is the case, for example, with the Pontifical Council for Justice and Peace, which could become a Congregation encompassing the Pontifical Council for the Family, Migrants, and the Laity.

Commenting on it, an official of one of the dicasteries that would be interested in this possible reform told Mondyavatican that «this proposal would in fact ‘clericalize’ these dicasteries.»  A Congregation for the Laity, he adds, «would put issues relating to the family and the laity under one of the Roman Curia’s strongest type of structure. The members of congregations and pontifical councils are cardinals and bishops, rarely laymen. But giving the laity a congregation does not mean give laymen more importance within the ranks of the Church. More likely, it is about about putting the laity under one umbrella.»

The same official underscores that «lay people are very important within the ranks of dicasteries, where they oversee key portfolios and hold posts at the highest levels. Should there be a (political) will to expand the role of laymen, more of them should, above all, be made members of congregations and councils, and not just consultants in them.»

In fact, Pastor Bonus states that «the dicasteries are composed of the cardinal prefect or the presiding archbishop, a body of cardinals and of some bishops, assisted by a secretary, consultors, senior administrators, and a suitable number of officials»  (art. 3).  It also foresees that, «according to the specific nature of certain dicasteries, clerics and other faithful can be added to the body of cardinals and bishops.»

Pastor Bonus can obviously be changed. But there would also be a need to change Canon Law, which establishes that some posts are reserved for clergy only.

A brand new Pastoral Constitution to replace Pastor Bonus is in fact what the group of eight cardinals is thinking about. At the same time, Archbishop José Carballo, Secretary of the Congregation for Institutes of Consecrated Life and Societies of Apostolic Life, has spoken about the possibility of reforming Canon Law. Taking the floor Oct. 29 at a conference about vocational perseverance, and speaking about religious brothers and sisters abandoning consecrated life, Carballo asserted that «there seems to be a need for a specific path for each novice,»  and also «a novitiate longer than what is contemplated in Canon Law,» to allow for better discernment.

According to canon 648 of the Code of Canon Law, the novitiate must last from a minimum of 12 months to a maximum of 2 years.

A reform of the Code could be an option, because Canon Law «is not the Gospel, it is written by men,»  Carballo said. At that point, Cardinal Joao Braz de Aviz, Prefect of the Congregation, commented: «That is what Pope Francis told us.» In a conversation after his remarks, Carballo told the author of this blog that «a reform of Canon Law should not only be about the novitiate, it could also be more comprehensive.»

In fact, no reform of the Code of Canon Law is expected at this time. Perhaps in the more distance future. The new code of Canon Law was issued in 1981 after decades of work. It took 16 years to draft «Pastor Bonus»  – which was mostly a realigning of the Curia more than a revolution. The reform of the Synod of Bishops will also take some time, which is the reason why the minor adjustments of every synod are portrayed as exceptions – not changes – to the norm.

That of February may be a sort of mini informal council, partly corresponding to the notion of the permanent assembly that Pope Francis wishes for the Church. This sort of a reform of synodality, a concept close to the Pope’s heart.

One Response to Is Pope Francis Leaning Toward The Establishment Of An Informal Permanent Council?