Papa Francesco, what happened in 2020 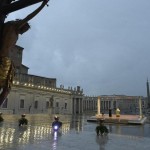 Pope Francis ended the year without celebrating Mass due to sciatica pain. And he started it without celebrating the Baptism in the Sistine chapel, as it is tradition, this time for the anti-COVID restrictions. 2021 was born, therefore, marked by coronavirus restrictions, and the Pope’s appeals to get out of the crisis together, and passed through the encyclical Fratelli Tutti, but also through an appearance in the pop magazine Vanity Fair. But what does 2021 look like for Pope Francis?

There are several issues to consider. First of all, there is the case concerning Cardinal Angelo Becciu, who lost at once both the post of Prefect of the Congregation for the Causes of Saints and the prerogatives of the cardinalate. Becciu’s case remains unclear: up till now, the Cardinal has not received any notification of charges by the Vatican tribunal. However, the Pope would have acted based on a Vatican Tribunal report concerning events that occurred at least two years earlier, when Becciu was the substitute for General Affairs.

Along with the case of Becciu, the issue of the purchase of a luxury building in London must also be considered.

That purchase, and the scandal that followed, was fraught with consequences, both personal and institutional. To sum things up: there are five Holy See officials first suspended and then not renewed or dismissed from their posts; the Secretariat of State has lost all kind of financial control; Cardinal Becciu was forced to resign.

Yet, nothing is known about a possible trial. How will the Pope handle this situation? Will it remain suspended, or will it be looked into? And, if there is a trial, will it be transparent?

The year also ended with a new consistory, during which Pope Francis created 13 new cardinals. As in financial matters, Pope Francis has been characterized by several steps back and forth, so the choice of new cardinals in 2020 seems like a return to the past.

Pope Francis broadened the electoral base (there are now 128 cardinal electors), but the last consistory was very Italian, with six Italians out of 13 new cardinals. In all, the Italian cardinals in the college of cardinals are 48 out of 228, almost one in five. Is the Pope, therefore, returning to a more “Italian” criterion? Or is the presence of six Italians the result of a particular preference of the Pope who did not take into account geopolitics? Despite the cardinals exceeding the number of 120 electors established by Paul VI, there is already talk of a forthcoming consistory for 2021. After all, since he was elected Pope, Francis has never failed to convene a consistory at least once a year.

As for the college of cardinals, 2020 was the first year that the Dean of the College had a fixed-term mandate and not a life-term one. The decision to change the Dean’s office was the surprise with which 2019 was closed. The Dean’s office equalization with the other Curia offices (whose heads all have five-year terms, renewable once) did not, however, led to a change in the criterion for succession. As usual, the deputy-dean, Cardinal Giovan Battista Re, who had led the 2013 Conclave from within, has been called to succeed Cardinal Dean Angelo Sodano. Battista Re is 86 years old, and his mandate will expire when he is 91 years old.

However, the return of the Italians to the consistory contrasts with Pope Francis’ decision not to create cardinals the archbishops of traditionally cardinalate seats (to date, Venice, Milan, Turin, Genoa, and Naples are without red caps).

Pope Francis has acted on Italy in two ways: he is proceeding with a decrease in the dioceses, consolidating dioceses in personal episcopes (the last case is that of the diocese of Modena and Carpi) and is trying to change the face of the Italian episcopate.

In this sense, two appointments in key locations such as Genoa and Naples are worth noting. In Genoa, Pope Francis called a conventual Franciscan, Father Marco Tasca, to test him as a bishop. In Naples, Bishop Domenico Battaglia was chosen, who comes from a small diocese administration and is known as a street priest. These are twin appointments which, in some way, mark a path.

Looking outside Italy, 2020 was the year in which the dilemma of the archdiocese of Lyon was finally resolved. Cardinal Philippe Barbarin was acquitted in the trial that saw him accused of alleged cover-ups of abuse. At the beginning of 2020, he retired to a monastery to meditate, leaving Monsignor Dubost with the apostolic administration. In March 2020, Cardinal Barbarin resigned as archbishop of Lyon, and the successor came only seven months later, with the choice of Olivier de Germany, bishop of Ajaccio. In 2020, the archdioceses of Dhaka and Bogota also experienced a critical succession. In 2021, the appointment of Manila’s new archbishop is expected, a post vacant for a year, and that of Caracas, which has been without an archbishop for two and a half years. The appointment of the new bishop of Hong Kong is also awaited, a position now vacant for two years: the choice is blocked, presumably due to a political problem.

In 2020, Cardinal Da Rocha was transferred to Salvador de Bahia, Brazil’s primatial see, which is also a cardinalatial diocese. The new archbishops of Brasilia and Guatemala City were appointed, as was the Latin Patriarch of Jerusalem.

The reform of the Curia, on the other hand, is expected in 2021. But, in truth, there have been a series of changes that could further delay its promulgation. The most important of these changes was the transfer of funds from the Secretariat of State to the APSA, and the decision to give the Secretariat for the economy the title of “Papal Secretariat for Economic Affairs.”

Thus, the Secretariat of State lost all financial autonomy and ended up on the sidelines of a reform project which had saw it firmly at the center of everything, as per tradition. Will the text of the Apostolic Constitution Praedicate Evangelium, still under examination, change further? Or, simply, will procedures go ahead without a structured reform, in a pragmatic way?