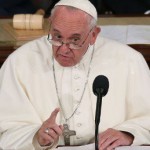 There is a series of four articles, written by Gianni Valente that probably explains better than any other recent piece of writing the state of the art of Pope Francis’s pontificate. This is not by chance. Gianni Valente is considered among the closest friends of the Pontiff, whom he knows since he was Archbishop of Buenos Aires. His direct line to the Pope was not even interrupted after the election. For this reason, every single word of his analysis should be pondered and studied. In the end, it raises some questions. One above all: has someone betrayed the Pope?

The articles have some substance, and contain well-grounded criticism aimed at the circle around Pope Francis.

For instance, Gianni Valente laments that the Pope is measured through categories and criteria “usually applied to CEO’s hired to reorganize almost failed mega companies,” as well as the “worldly, company-like measures through which Pope Francis’s pontificate is read.”

Then he targets the way the Pope’s image is communicated, the “stunt castings to make his presence viral” that sets “out of reach” the “worldly – corporate” reform that he is given “as an obligatory task in order to enter the Hall of Fame of global super leaders.” And he adds: “In fact, it should not be taken for granted that he is interested in this.” That is, it is not granted that the Pope is interested in Curia reform, as it is designed.

Gianni Valente, in fact, raises a lot of issues. He complains about those who are considered the early traditionalists, whom he labels as “dubia disseminators” (and the reference is very clear) as well as with those who praise the pontificate. Both of them, according to Valente, are much too taken up with details to be able to understand the evangelical impact of the Pope’s message.

The journalist – author of many prestigious books – also sheds light on the fact that some of the remains of John Paul II’s pontificate are still present, especially when he affirms that “leftist Wojtylans, after lost debates against the rightist Wojtylans, are often well disposed to echo Pope Francis’s catchphrases about poor and the ‘Church in exit’, just in case this might be helpful to rebalance the relations of forces among clerical networks.”

It is even understood that the Pope’s December 22, 2016 Christmas speech to the Curia was written for the Pope, and not by the Pope. The speech is described as ‘the outlining of super-dicasteries to be given major importance,” intended to make them “more effective centers for exercising a certain leadership claim over the universal Church, following the most updated canons of corporate organizations.”

Valente also looks back, and criticizes the “artifex of the economic reform” undertaken in the name of the Pope, that “moved since the beginning within the most patented rules of a compassionate Anglo-Saxon neo-capitalist ideology: transparency and effectiveness, investments and capital to generate revenues according the rules of the market, obviously for the good of the poor.” The journalist also mentions the “questionable initial phase” involving external commissions, and recalls the hiring of McKinsey, Promontory, Ernst & Young, KPMG, all of those available to “give ‘essential’ counsel in order to set up a modest bank (editor note: the IOR in fact is not a bank), whose core business is supposed to be the accounts of religious sisters and missionary institutions.”

Valente’s biggest criticism is addressed to media reform, with only vaguely hidden rebukes of Msgr. Dario Edoardo Viganò, considered the deus ex machina of the reform. Valente marks the difference between Vatican Radio before – with a shortwave service that reached out to all over the world – and the current situation. Valente also quotes the Italian specialized porta Italradio that wrote that the reform “will leave many without Vatican Radio,” that is “dramatically in contradiction with the values Vatican Radio always incarnated, seen since the very first day of its foundation as the tool through which the Church reaches the last of the earth and those peripheries Pope Francis really cares for.”

The knot of contention is the shut down or limitation of the Radio’s shortwave broadcasts. The service was shut down in Africa while “an agreement with Facebook was announced to spread the Pope’s messages via smartphone in 44 African countries.”

Valente also does not miss targeting the Secretariat of State which “last February 22 announced that a specialized multinational company will put the use of the ‘Pope’s image’ under its control and will ‘properly’ intervene in cases of abuse”, just as – he notes – “corporations do in order to safeguard their brands.”

All of these details, and some more, make room for the question: was Pope Francis betrayed? Reading Valente’s analysis, it is easy to think that the evangelical impact of the Pope’s message is disempowered by the people making up the Pope’s inner circle.

However, this leads to another question: if this is true, how did these people gain so much influence? Why did Pope Francis trust them? Why did he not make other choices?

In fact, these same things were written at the beginning of the Pontificate – even on this blog. But anyone who mentioned them was demonized or labeled as “critical” or resistant to the Pope, or even considered his enemies. Why is it only now possible to say these things? What happened?

These questions will remain suspended. Based on Valente’s analysis, the Pope cannot be interpreted through the lenses of his being Argentinian and Jesuit, that is, by considering his roots and his life choice. The life choice is however so profoundly rooted in him that Jesuit criteria exude from his homilies and speeches, presenting purely Ignatian themes like that of the discernment of spirits and corruption. The life choice is so definitive that in the only authorized biography, a sort of manifesto of the would-be Pope, is meaningfully titled “The Jesuit.” On the other hand, if we do not look at his nationality, we would take out of the analysis the notion of pueblo and South American populism that Pope Francis has often praised in contrast with European populism – good the first, dangerous the second.

Both of these options are in the end considered reductionist by Valente, as they would put the Pope’s work within a fence.

However, this kind of analysis is not news. St. John Paul II, for instance, was often derogatively labeled as “the Pole”. On a wider scale, every change of season bore some resistance. And Valente mentions the people around John Paul II, considering them as either leftist or rightist, and at the same time leaving it understood that today can be comprehended only looking back to what happened during the very season of John Paul II – or, better, during the last years of that season. And it is shocking that we are talking about John Paul II’s aftermath, but never of Benedict XVI’s, as if his pontificate never existed.

But the search for God is set aside in the name of a pushed reform that lacks theology and even apparently some pastoral approach which Pope Francis always requires.

It is sufficient to give a quick glance to some of the articles that marked the 4th anniversary of Pope Francis’ pontificate to understand that, in the end, the pastoral impact of Pope Francis’s catchphrases – going toward the peripheries, a Church with the smell of the sheep, the abused phrase of a poor Church for the poor – was rather interpreted in political terms, as if the Church was a corporation that needed some healing, at any cost.

Two examples: The Tablet wrote that Pope Francis is “the startup of a compassionate Church’s disruption,” while El Pais asks whether “Pope Francis is an impostor”, thus underscoring the sense of disillusionment over a revolution that never took place.

The people who are closest to the Pope are well aware that this disillusionment bears the threat of the betrayed expectation, almost tending toward a media threat of blackmail that now lurks behind any action of the Pope. In fact, this blackmail threat does not come only from the media or from people who were always considered as the opposition, but also by those who supported this Pontificate.

The notion of an agenda behind the Pope’s back thus gathers strength. That there can be an international agenda behind the Pope is not news. Pope Benedict XVI’s pontificate was the victim of agendas that heavily pressured the pontificate and the Church’s teachings, as happened with the 2010 pedophilia scandals – with a series of articles published almost following a precise timer – and with the international protests after the Pope’s 2009 declaration on condoms during the flight to Africa. However, the agenda behind Pope Francis’s back is apparently different, and it comes from the inside rather than from outside.

However, the Church endured before a heavy campaign, during which it was labeled as the Church of no. Is Pope Francis’s the Church of yes? It is now clear that the right answer is no, as Pope Francis has a different personality and a different way of dialoguing with the world, but will not likely formally change doctrine. The Pope will in the end simply leave open the door for interpretation, following the Jesuit method not to exclude everything a priori.

In the end, Valente’s defense of the Pope by any kind of interpretation apparently certifies that this pontificate is not that of the Second Vatican Council’s Springtime as conceived at the time by the Media Council. In the end, the Church is still alive, beyond a submerged schism. This Church is really in the peripheries.

After four years, the season of the “new course” comes to an end. It is interesting how Gianni Valente mentioned, at the beginning of his long analysis, a behind-the-scenes article that quoted a prelate who secretly said to the journalist: “Four years of Bergoglio would be enough to bring about change.”

Four years have passed by, while the promoters of the new course have been sometimes revealed as opportunists. This is what we can read between the lines, though the final interpretation might yet be different. But a question still remains: was the Pope betrayed?