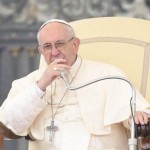 It seemed almost taken for granted that Pope Francis was going to celebrate a consistory at the end of June. With the consistory, the Pope might have created six new cardinals and surpassed the limit of 120 cardinals voting in a conclave set by Paul VI and confirmed by St. John Paul II.

The consistory will not take place, as Pope Francis has not announced it yet and he must do so one month in advance. The Pope will not even sign off yet on the Curia reform, as it was rumored, though the draft for the Curia reform is now circulating.

Everything, in the end, is suspended. News about the consistory and the conclusion of the Curia reform were not official. There were many signs pointing there, however. Many, in the Vatican, noted that Pope Francis had called for a meeting of the Council of Cardinals from June 25 to 27.

Generally, the Council gathers at the beginning of the month. The schedule seemed to be perfectly aligned: Council of Cardinals, consistory for the discussion of the reform and the creation of new cardinals on June 28, and Mass with the Cardinals on June 29, the feast of St. Peter and Paul. In that occasion, Pope Francis also blesses the palliums for the metropolitan archbishops appointed within the last year.

It seemed a perfect plan. It was such because it was likely too artificial to be true. After six years of discussions, Pope Francis certainly wants to finalize the Curia reform. Once issued, the text might be amended, as it happened with many of Pope Francis’ decisions.

It may be that Pope Francis is not in a hurry. By the way, haste makes waste. Bishops who have received the draft are very well aware that things must be done with calm. The draft was sent to presidents of bishops’ conferences or of a Vatican dicastery at the beginning of May, asking for feedback by May 31. Too little time, almost everybody said.

Pope Francis can do whatever he wants with the text. Suggestions that will come from the world consultation on Curia reform will be just suggestions. On the other hand, a decision not to listen to the local Churches when Pope Francis emphasizes synodality might be seen as a contradiction.

Discussions within the Curia and at the local Churches, and Pope Francis’ desire to create more than six cardinals, postponed all the decisions.

Rumors now point to a consistory in November. There will be 114 voting cardinals and six slots for new red birrette. Pope Francis might also create eight new voting cardinals since two cardinals will turn 80 at the beginning of 2020.

Two are the possible dates: around November 21, the feast of the presentation of Mary in the Temple; or December 8, feast of the Immaculate Conception.

These two dates would fit perfectly with a possible trip of Pope Francis to Japan. The journey is not official yet: It should last just three days, from November 25th through the 28th, with stops in Tokyo and Nagasaki. In the end, Pope Francis might celebrate the consistory before or right after the trip to Japan.

The Curia reform might be finalized at the end of the year. The draft will be reviewed and made consistent with the Canon law. Some adjustments can be noted in the micro-reform of Caritas Internationalis or the new law of the Vatican City State.

Does this mean that it was finally understood that structures are not just decorations? The debate about a partial redesign of what is called “the Pope’s court” never ended. Nothing is for certain.

Ultimately, it is hard to find guidelines for Pope Francis’ reform. If there are any, they are well hidden. If there are not, it means that the reform reflects moods and will hardly attain a final shape.

The discussion is now very much focused on the need to evangelize, on the mission, on the conversion of hearts. What is missing is the acknowledgment that structures were created to guarantee evangelization and mission.

The court, as it is called, guarantees a stable body and organization that would otherwise be left to the moods of the sovereign and of his closest associates. The dicasteries, with all of their limits, were another way to organize evangelization and make the Church present where it was needed. The work recently done on Canon Law was to guarantee justice.

Men make institutions. The rationale has been to change men if needed and to redo the structures. However, men always move on, while institutions remain.

This is the state of discussion, when everything seems to be suspended. Pope Francis speeded up things at the beginning of the year, when he scheduled five trips. Now, the Pope seems to be pausing for further reflection. The Synod of October and the month of November will be the crossroads of the pontificate.