Pope Francis, what to expect 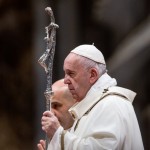 Cardinal Lorenzo Baldisseri is no longer the general secretary of the Synod of Bishops. He was replaced by Bishop Mario Grech, who had been appointed pro-secretary at the eve of the Special Synod on the Pan-Amazonian region. Cardinal Baldisseri’s exit is the beginning of a generational shift of the Roman Curia that will extend for the next year and a half. At the end, or during, this generational shift, Pope Francis might even convoke another consistory to create new Cardinals.

Only time will tell if Bishop Mario Grech will be created a Cardinal, as Baldisseri was. Cardinal Baldisseri was the second in the new red hats list at the first consistory of Pope Francis in 2014. The choice to rank him second among the new cardinals was immediately interpreted as a clue that the Synod of bishops would get more powers. In the exhortation Evangelii Gaudium, Pope Francis even spoke about entrusting the Bishops’ Conferences of more powers. All the clues pointed toward the notion of a significant decentralization.

So, if Pope Francis will not create Bishop Grech a Cardinal, can we assume that Pope Francis’ initial plan has changed?

This is one of the many questions of this phase of transition of the pontificate. While the Pope is committed to granting book-length interviews, deliver public speeches, and publish a new encyclical, there is a whole Roman Curia that is waiting for a substantial change.

Cardinal Robert Sarah, prefect of the Congregation for the Divine Worship, turned 75, the retirement age: Pope Francis confirmed him in his position until further notice. Cardinal Beniamino Stella, 79, will lead the Congregation for the Clergy until he turns 80. However, rumors about the succession spread already earlier this year: a new appointment seemed imminent, but did not take place.

The president and the secretary of the Vatican City State administration, Cardinal Giuseppe Bertello and Bishop Fernando Vergez Alzaga, turned or are going to turn 75. Finally, Monsignor Pio Vito Pinto, Dean of the Tribunal of the Roman Rota, is almost 80.

It is important not only to know who will replace these cardinals and how the Curia’s future roster will be, but to try to understand Pope Francis’ criteria. According to the reform, all the dicasteries will be considered on a par, thus losing the distinction between Congregations and Pontifical Councils. Will Pope Francis create all the head of the dicasteries cardinals? Or will many of them stay bishops or archbishops?

It is not a farfetched question. If the Pope wants to consider these positions cardinalitial, he should convoke a new consistory between November 2020 and February 2021. This consistory might consist of only Curia Cardinals. The Pope might then raise to 130 the number of voting cardinals in a conclave, surpassing the 120 limit set by Paul VI. A long time ago, a rumor spread that the Pope might expand the electoral base for his successor. Pope Francis would do it his way: he would make an exception and not establish a new rule.

The expansion of the future Conclave electoral bases would also correspond to Pope Francis’ need to leave a legacy. He certainly does not want that the Church’s model he has been proposing until now is swept away by a new pontificate.

What is Pope Francis’ model of the Church, then? Fr. Antonio Spadaro, the editor of the Jesuit-run magazine La Civiltà Cattolica, said that the Pope aims at a missionary Church that seeks spiritual conversion and considers the structures’ reform as a consequence of the spiritual conversion.

How can this spiritual conversion take place, then? The Pope sets the emphasis on the care for the poor and the marginalized, and in general, on respect for the victims of the so-called throw-away culture. Pope Francis also speaks frequently about popular piety and uses the arguments of popular piety.

And yet, social themes are seemingly at the center of Pope Francis’ teaching. These social themes are read through Christian lenses and a Christ-center perspective. At the same time, they sometimes lack the depth of faith that makes a person a Catholic. In the end, Catholics are not merely believers who enjoy doing good deeds.

Fr. Spadaro warns against reading Pope Francis’ reform from a political point of view, and underscores – with documentary evidence – that the Pope did not address the possibility of married priests in the post-Synod exhortation Querida Amazonia, as many expected.

On the other hand, the Synod has turned into a sort of Parliament because of Pope Francis’ reforms. The reforms are, as usual, informal. One of these reforms is the release in the final document of all the propositions discussed, even those which do not reach the Synod’s consensus. The propositions are made public along with the number of votes for or against them.

In the past, the votes were not made known, nor were the propositions that did not get two-thirds of the votes. It was because the Synod aimed at a synthesis that all could relate to. The goal was not showing a majority and a minority. Instead, the goal was to foster communion. The publication of the votes made the debate more ideological and sparked competition and disputes.

All of these details must be taken into consideration to understand what is happening in Rome. Everything seems to have a life of its own, while the Pope carries on with his work and tries to be more vocal in the public arena. Pope Francis was elected with a mandate for reforms. Reforms are taking place slowly. And, also when reforms were underway, Pope Francis has confused matters: he switched from hiring costly external consultants to the consultants from within, and now he is leaving the reform suspended.

It is possible that the best is yet to come, and we cannot see it. But it is also possible that confusion will reign until the election of the next Pope. The electoral campaign has already begun.

3 Responses to Pope Francis, what to expect