A warning by Cardinal Bagnasco and Benedict XVI’s former students 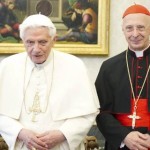 Cardinal Angelo Bagnasco said it loud in an Aug. 10 homily: there is “an anti-Christian persecutory regime,” even in Europe, acting in a subtle way. His warning must not be underestimated: it is part of a wider reflection, that is directly connected with the topic of discussion of the upcoming gathering of Ratzinger Schuelerkreis, the group of former Benedict XVI’s students: “Church, State and Society.”

How are Cardinal Bagnasco’s homily and Ratzinger Schuelerkreis topic connected?

In his Aug. 10 homily, Cardinal Bagnasco underscored that this discriminatory anti-Christian regime “takes place even Europe, where, with refined norms, the freedom to publicly profess the faith is limited, and faith is ever more pushed toward the private sphere.”

The Cardinal added: “With the excuse not to hurt any of the various cultural or religious sensitivities, there is the aim to establish a uniform downward way of living, eliminating traditions that are legitimate and respect everyone, or at least changing (in these traditions) names, places, symbols.”

Cardinal Bagnasco certainly knows what he is talking about. When he was president of the Italian Bishops’ Conference, he put on the bishops’ table a dossier of the Observatory on the Intolerance and Discrimination Against Christians that, with data, showed the facts of this anti-Christian persecution that does not grab the headlines.

When Cardinal Bagnasco was elected president of the European Bishops’ Conferences, he brought up the challenge: he denounced several times the establishment of a world order without God and claimed for bishops the freedom and the possibility to speak about God in the public arena.

There are many hidden references in Cardinal Bagnasco’s homily. The “refined norms” he was talking about can be about a series of issues, from the abolition of Christmas from the calendar of European Union holidays to the prohibitions to display Christmas symbols in public, as well as several attempts against objection of conscience, that take place when Christians are asked to accept abortion and euthanasia to be performed in their hospitals.

However, Cardinal Bagnasco did not provide concrete examples, though the scenario is clear to him. “It is clear, Cardinal Bagnasco said, that there is an attempt to dilute faith in order to extinguish it in the collective and personal conscience, reducing faith from a guiding force to a vague memory.”

This attempt started long time ago. This is why it is not surprising that Benedict XVI picked “State, Church and Society” as the topic of discussion of the next Ratzinger Schuelerkreis meeting, to be held Sep. 6 to 9.

This is a hard hitting topic in Germany. The discussion there is not just about the situation of migrants, but also family counselling institutions. At the end of the 1990s, German Family Counselling offices were asked to accept issuing certificates for abortions – though not performing it – in order to stay in the State system.

This is just one reason why it is important to reflect on relations between Church and State. Even the objection of conscience seems posed to be eroded.

This paradox is not just German. It takes place any time religious freedom is confused with freedom of expression, or any time the State attempts to avoid recognizing the role of religions.

The main lecturer at the Ratzinger Schuelerkreis will be Udo Di Fabio, a former judge of the German Constitutional Court for international law, European Law and Parlamentarian Law. Di Fabio was also president of the Scientific Committee of the German Lutheran Church for the 500th anniversary of the Protestant Reformation.

Di Fabio’s studies focused on the “culture of freedom” and on the way it is developed, especially in Germany, with the tensions between the values of the Fundamental Law and globalization.

On Church and State relations, Di Fabio wrote that “there cannot be a State that self-describes itself as a Christian state in a religious sense,” since the Fundamental Law guarantees the State neutrality toward religions. He however added that neutrality must be understood as a benevolent neutrality: religious communities must not get bonuses or penalties, but they are given a particular value, which gives the Churches the possibility to have an impact on the public discourse.

In 2016, Di Fabio curated the legal report “Migration Crisis,” critical toward illegal migration, attacking those who say that uncontrolled immigration is the price of globalization.

With this topic, Benedict XVI is seemingly following a precise path for his students: since he retired, the Schuelerkreis members have discussed the eclipse of God, Europe, persecution of Christians, and now Church-State relations.

That is: they discussed the need to evangelize, in an always more secularized Europe that is enduring a hidden persecution of Christians (beyond the visible persecution) played on the Church – State relations.

It is noteworthy that Benedict XVI had set his theological research, and also his pontificate, on the issue of truth. There lies a fundamental meeting point with Cardinal Bagnasco’s warning.

Out of truth, the Cardinal underscored, “the law can declare legitimate some behaviour, but cannot make them right behaviours, thus paving the way to the abuse of power.”

Truth, he added “springs out of truth of the human being the way God created him, along with love, fidelity, justice. And so an open and united society can be built, shaped with a personal face and in honest dialogue with everyone, without instrumentalizing anyone, above all the weakest ones.”

There lies the big challenge of today’s Church.