Pope Francis, three clues from his speech to the diplomatic corps 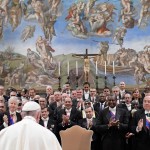 The first Papal speech of the year is by tradition the speech delivered to the diplomatic corps accredited to the Holy See. The address provides the guidelines of the pontifical diplomacy for the coming year. For this reason, it is often described as “the speech on the state of the world.”

Pope Francis zeroed in on many topics in this year’s speech. The geopolitical attention was directed to US – Iran tensions, but Pope Francis also mentioned Yemen, where there is an ongoing conflict, forgotten by everyone but the Holy See.

The speech also focused on the Middle East and the Israeli – Palestinian situation; it mentioned the “frozen conflicts” like that in Georgia or the forgotten ones like Ukraine. Pope Francis also confirmed that he wishes to go to South Sudan this year, and he paid particular attention to Latin American countries ravaged by social tensions.

Pope Francis’s speech is also an excellent tool to understand the pontificate. Three revealing clues stand out: it was a speech that looks backwards, with very few prospective views; it advocated a reform of the multilateral system; and it pointed at using the Synod as a diplomatic tool.

Pope Francis’ “narrative” choice for the speech confirms that it is a retrospective speech. He used his 2019 international trips as a fil rouge to present a global perspective. The only preview is about Pope Francis’ desire to visit South Sudan. At the same time, a possible 2020 trip to Cyprus was glimpsed from his support to the efforts for the reunification of the island, where the last wall of Europe still stands.

At the moment, there are no Pope Francis’ trips officially announced for the upcoming year. Pope Francis also mentioned, as part of the 2020 strategic challenges, the forthcoming 10th Review Conference of the Treaty of Non-Proliferation of Nuclear Weapons and the 75th anniversary of the United Nations.

In the end, the speech fails to present projects. One might object that a new year’s speech can be intended as an evaluation of the past year. Yes and no. Last year, Pope Francis put particular emphasis on multilateralism. It was a preview of the attention he paid to the multilateral system throughout 2019. With the Curia reform, there will be an undersecretary in the Secretariat of State exclusively dedicated to multilateral affairs.

Two years ago, Pope Francis pointed the finger at the new rights born out of 1968. This topic was central to many international negotiations. It is well known that United Nations terminology that includes gender ideology and the right to abortion tends to find its way into every document. In 2018, the Holy See strongly lamented that this strategy was even present in the global compacts on migrants and refugees.

Even Pope Francis’s strong “no” to nuclear weapons seems old news, a nearly left-behind battle. Pope Francis mentions the 10th review conference on the non-proliferation treaty, and that is important. However, the real issue is the use of artificial intelligence and drones in warfare. Only States can arm themselves with nuclear weapons. States, however, do not wage war as much as they did before. The small transnational (and criminal) organizations do.

In the end, these themes might point to an “end of the pontificate speech,” a final balance. In general, it seems that there is no forward vision. This lack of foresight was already present in the discussion of the Curia reform. For example, the draft of the Curia reform mentioned the promotion of the UN Sustainable Development goals.

Rather than Curia reform or a conversion of the heart, Pope Francis might be looking to promote a cultural conversion. He launched the Global Pact for Education, to be held in May. Even in that case, the pact is about a world alliance for a new culture, and not about a culture that emanates from the Church and radiates to the world. This is probably why the Church is ever more visible but, at the same time, less influential in the cultural discussion.

Second clue: the push for a reform of the multilateral system. A reform of the United Nations has been under discussion for a long time. Benedict XVI advocated for it in Caritas in Veritate. For the Holy See, the main issue is the effectiveness of international organizations and the way the small countries are represented in them. Multilateralism involves giving every country the same weight. The Holy See has always been skeptical about meetings like the G7, G8 or G20: they do not represent everyone, they are just a club of the “biggest on earth.”

Pope Francis reiterates the need for reform. It links it to the issue of the new rights, which have “no objective anchoring,” reprising the theme of ideological colonization. Pope Francis, however, wants international organizations capable of exercising authority over States. This runs opposite to subsidiarity. Yet, one can glimpse this notion in Pope Francis’ encyclical Laudato Si.

Thus, Pope Francis aims at a pragmatic reform of the United Nations, that would help it to have more traction on States on some topics. It is a slightly different approach, which reveals Pope Francis’ idea of authority.

Finally, Pope Francis uses the Synod as a diplomatic tool. He mentioned the Panamazonian Synod in his speech, and he underscored that it was, yes, an ecclesial event, but that diplomatic issues, like the environment, were also discussed.

This indicates that Pope Francis will use the post-Synod exhortation as a guide for the Holy See approach to promote an ecological conversion. The exhortation might become one of the documents Pope Francis gives to visiting presidents, as has been done with the Document on the Human Fraternity signed last February.

The mere mention of the Synod in a diplomatic speech reveals that the Pope considers everything to be political. Pope Francis’ rationale is very much linked to Latin American populism. The people and the service to the people come before everything else, and concrete action is fundamental.

In the end, Pope Francis uses the institution, but he is always a Pope alone at the helm. The institution seems, to Pope Francis, mostly a tool to execute his political plan. The Pope looks at past practices, but he has no scruples in setting everything aside if it does not fit his goals. This pragmatic approach can hardly help an institution resist long term pressure. Everything is centered on the leader’s communications skills.