Seminaries: Key To The Next Conclave Pope Francis: What If It Is Just A Matter Of Language?

Pope Francis: Two Speeches Indicating What the Upcoming Year Will Be Like 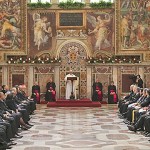 Pope Francis delivers his Christmas greetings to the Roman Curia this week, and during the first week of January he will deliver his first address of the year to the diplomatic corps. It is likely that these two speeches will set the tone for the upcoming year, one that could be rich in surprises.

Let’s talk first about the speech to the Curia. In one of his first Christmas speeches to the Curia, Pope Francis strongly attacked careerism and listed the Curia’s maladies. He never misses an opportunity to express his disaffection for the curial structure, and his fight against careerism has been proven to be one of the key points of his pontificate. This can be seen by the way he distributed red hats, giving them mostly to bishops who do not govern a traditionally cardinalatial diocese. Over time, however, the Pope has certainly learned to appreciate the Curia more. He has said that there are many people with good will who work in the Curia. He has appreciated the consultants of the so-called “hidden Vatican,” and this can be noted in the gradual transition from an era of external consultants to consultants from within the Vatican who replaced the former, even though these internal consultants are rarely chosen through the traditional Vatican channels.

On the other hand, Pope Francis’s tone turned to bitterness again in recent times, especially during his morning homilies in the Domus Sanctae Marthae. In his homilies he often speaks about Judas; he once more addressed his critics in the “clerical world,” and reiterated the need to avoid being “clerks of the State.” It is possible that this new papal bitterness comes from the polemics that followed the publication of the letter by four Cardinals, who presented the Pope with their “dubia” concerning “Amoris Laetitia”. The publication of the letter was immediately interpreted as a clear attack against Pope Francis, following the now usual narrative that outlines a pro-Francis front and an anti-Francis one. This narrative often has peaks of sharpness, and thus does not lead to a healthy and constructive dialogue, something for which both parties are responsible. In the end, the “parrhesia” (frankness) which Pope Francis asked for at the beginning of the synod process is not taking place, while on the contrary we are living in an era of mutual suspicion and accusations. It is true that the Cardinals’ “dubia” have generated some turmoil, but it is also true that they are never discussed from the perspective of the questions they raise, but always from a perspective that always alleges that the Pope is under attack. The Pope, on the other hand, keeps on defending the synodal process. He maintains that the Holy Spirit has spoken in both Synods, and this is the reason he defends all the interpretations of “Amoris Laetitia” that emphasize pastoral discernment, while leaving aside the doctrinal aspects. During these last days the homilies at Santa Marta were filled with attacks against doctrinal rigidity, while the Pope also repeated the image of a cardiac sclerosis in a recent interview to the Belgian magazine “Tertio”.

It is possible that all of these topics will be mentioned in the Christmas greetings to the Curia. The speech can be expected to disturb those who have been working in the Vatican for their entire lives, those who are good servants, not like the careerist majority of Vatican employees.

After that, the Pope will deliver an address to the diplomatic corps, and it will provide another clue about the way he will move in the future.

The issue of immigration will be central. During the last day of the 17th session of the Council of Cardinals, December 13, the names of Pope Francis’s team which is working on migration issues was made public. This team will assist the Pope in managing the migration office, established within the new Dicastery for the Service of Integral Human Development. The Pope undertook ad tempus the responsibility for heading this office, and he will be assisted by two new undersecretaries: Fr. Michael Czerny, SJ, who has great experience in migration and social justice issues, and who has been working since 2010 as secretary and counsellor to Cardinal Peter Turkson, President of the Pontifical Council for Justice and Peace and Prefect of the new dicastery; and Fr. Fabio Baggio, a Scalabrian who oversaw migration issues in Buenos Aires when Bergoglio was Archbishop there.

As is known, this Message is presented each year to governments from all over the world on January 1. Despite the fact that “non-violence” has a vague, New Age flavor, Archbishop Silvano Maria Tomasi, Secretary Delegate of the Pontifical Council for Justice and Peace, provided it with a diplomatic significance. He explained that the Holy See was making a diplomatic tool of non-violence, emphasizing the role of diplomatic mediation that has always characterized Vatican diplomacy (Pope Francis’s commitment to mediation brought about the normalization of US-Cuban relations, and the Pope also worked as a facilitator in the peace agreement between the FARC and the Colombian government).

Non-violence will be another diplomatic guideline, a new one that accompanies the notion of the “duty to protect” outlined by Cardinal Pietro Parolin, Vatican Secretary of State, since his first trip in that capacity to United Nations in September 2014.

This situation in general shows a change in the balance of forces in the Vatican. The shift took place during Pope Francis’s pontificate, during which Sant’Egidio – which had been sidelined in the last years – has now returned to the scene as the star of the show, and tries to keep this frontline presence. They do this by striving to involve all the various individuals who approach the Holy See, such as the al Azhar imam – al Azhar has recently re-established relations with the Holy See – and the newly-created Cardinal Dieudonné Nzapalainga, Archbishop of Bangui, Central Africa.

No doubt that dialogue with Islam is one of the core issues of Pope Francis’s diplomacy. Speaking at a gathering called “Exchanges” between politicians and representatives of religions at the Council of Europe, Archbishop Miguel Ayuso de Guixot, Secretary of the Pontifical Council for Interreligious Dialogue, underscored the need for a “culture of the encounter” – in Pope Francis’s words – and asked for a multilateral commitment among religious communities, claiming the importance of religions on the ground. His speech developed the notion of cooperation among religions over mutual values to back the common good: a notion that today, in secularized Europe, has apparently been set aside, as religions are as well.

The dialogue with Islam, and the dialogue with religions in a wider sense, shows a wish on the part of the Holy See for an increased presence of religious sentiment in public life, though Pope Francis really does not want a Church that proselytizes.

It is also noteworthy that the Holy See initiated a dialogue on foreign policy issues with its cumbersome Italian neighbor, scheduling a series of meetings between Archbishop Paul Gallagher, the Vatican “foreign minister,” and his former counterpart in the Italian government, Paolo Gentiloni, now the Italian premier. The two States tried to cooperate in order to tackle the issue of refugees and to look together at the international scenario, though the Italian side often considers the Holy See as a small enclave that has to be anchored to the government of Rome. This notion endures from the nineteenth-century occupation of Rome and the annexation of the Papal States.

Issues like sovereignty are not then confronted by Pope Francis, who in general prefers to maintain cooperation on concrete issues. He demonstrates the same attitudes at the doctrinal level, since he prefers tackling concrete cases instead of focusing on a doctrinal framework. In every field, the Pope applies the concept that “realities are greater than ideas,” contained in the Apostolic Exhortation “Evangelii Gaudium”.

This notion strongly characterizes Pope Francis’s pontificate, and it is also through this lens that the two upcoming papal speeches must be read. These speeches will set the tone for Pope Francis in 2017. From “Amoris Laetitia,” to curial reform, and from there to diplomatic doctrine, Pope Francis’s actions will always focus more on concrete issues, and not on programmatic lines. It is expected that during 2017 he will finalize his reform efforts.