Pope Francis: The End of an Era? Is Pope Francis Increasingly Centralizing Decisions?

Pope Francis, what if real reform is Romanity? 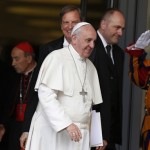 The Last Council of Cardinals that gathered to discuss the Curia reform took a sort of a break, during its last meetings. During this break, the Cardinals have re-read Pope Francis’ texts on reform and developed the themes on the Curia change.

These were the topics of discussion: the Curia as a tool of evangelization and service for the Pope and the local Churches; decentralization; the role of Apostolic Nunciatures; and the selection of the Curia staff, that must be less clerical, more international, with an increase of young people and women.

These topics are not brand new. Looking back, it is evident that this path started long time ago.

The current push for a more internationalized Curia, and more attention to the local Churches, started during the 2013 pre-conclave meeting. Looking at those meetings four years after, it seems that those discussions were a reaction to Benedict XVI’s penultimate consistory, that created a large majority of Italian and Curia Cardinals. It is not surprising that Benedict XVI rebalanced things in his last consistory, during which he created five more cardinals, none of them Italian or working in the Curia.

However, the internationalization of the College of Cardinals had started long time before.

In 1946, Pius XII celebrated its first consistory, the first consistory after the Second World War. That consistory marked the end of an era: for the first time in centuries, Italian cardinals were not the absolute majority, but represented only the relative majority of the College. All the consistories that followed confirmed this trend. Step by step, the presence of Italians in the College of Cardinals was diminished.

In the 1953 consistory, Pius XII created 3 Curia cardinals out of 24 new red hats, and 17 out of those 24 were diocesan bishops. This trend, despite the need to balance things because of the Curia composition, was substantially always followed since.

The composition of the Curia itself has been characterized by an always more international environment. True, there has always been a preference for the “Italian world”, as that was the world in which the Curia worked, and because Italian has always been the Curia’s working language. It is however a fact that the Curia also looked outside of Italy. This is demonstrated by a story about Benedict XV. Talking about the problems created by a German prelate, the Pope told a friend: “Even if they are of ecclesiastical extraction, and valuable, foreigners always have a loose screw in their heads, and this makes them somewhat lacking with respect to the Italians, who are more highly regarded: in them, more tact, prudence, calm and balance in tackling issues are noticeable.”

This anecdote show how, even at the beginning of the 20th century, the Curia was not comprised only of Italians. For example, Cardinal Rafael Merry del Val, a Spaniard, was Vatican Secretary of State since 1903 to 1914.

Obviously, in the course of time, there has been an increase in international staff. Looking at the Annuario Pontificio, the Vatican Year Book, we can see that nowadays Curia officials are often lay people, often non Italians, and women are no longer always sidelined to marginal posts.

Even the issue on how the Curia can be of service to evangelization was widely discussed, especially with the reform that followed the Second Vatican Council, through the Bl. Paul VI Regimini Ecclesiae Universae constitution first and in the St. John Paul II’s Pastor Bonus later.

During the long preparation of the Pastor Bonus, there was also a discussion on whether to change the name of the Secretariat of State. “A first draft – revealed the Italian newspaper Repubblica in 1988 – foresaw a change in name. It was proposed to call it Papal Secretariat or Apostolic Secretariat. Instead, they chose to leave the old denomination, even because it carried a certain historic solemnity. Cardinal Agostino Casaroli, Secretary of State, opposed the change of name. Joking, he had said that there was a wonderful inscription in latin by the front door of his office, that said ‘Secretariatus status’, and that it would have been a pity to get rid of it.”

This anecdote underscores another issue: reforms in the Vatican have never been detached from history. History, as well as the historical language, has its weight. Nothing, in the Vatican, is born out of nothing. Everything has a profound and theologically-rooted meaning.

It is so for the Roman Curia, that is, in the end, the body that assists the Pope. The Curia’s top ranks are not ministers of the Vatican City State. They are part of a body, the Holy See, whose head is the Pope. For this reason, the heads of Roman dicasteries must be Cardinals or Archbishops, as they must have a collegial link with the Pope that is given by the episcopal ordination. For this reason, to talk about a major representation of lay people and women in the Curia is to give a political meaning to something that does not have a political meaning, and it can never have.

This is certainly one of the most important ongoing discussions. Even this push for lay people and women is also probably a sort of psychological rebound, generated by the various anti-Vatican campaigns featured in the secularist press and that even captivated the imagination of some priests.

However, the same notion of a poor Church for the poor, so much in fashion today, is not brand new in the Church. Bl. Paul VI himself had very much the issue in his heart of a demundanized Church. However, it did not mean that he wanted to cancel the symbols and history. It meant to transform them. Reading the Pontificalis Domus, the document with which Paul VI reformed the Pontifical Household, would make things clear. To Paul VI, the evolution of things did not mean a complete break with the past.

Then, there is obviously the issue of the relation with Italy. On the one hand, Italy thinks of the Vatican as its natural extension. On the other hand, the Holy See has a need to defend its sovereignty, because this sovereignty is the safeguard to be free in carrying its mission.

In this sense, the appointment of the first non Italian as Papal nuncio to Italy is the last step of a path started long time ago. Paul Emil Tscherrig, a Swiss with a great experience as nuncio around the world as well as part of the team that organized John Paul II’s international trips, has the task to go beyond the Italian mentality in the Holy See’s relation with the Italian State. In general, relations with the Italian officials were managed as personal relations by the Secretariat of State. The new nuncio is called to implement a shift, also in choosing new bishops – and that of the bishops’ profiles is the real reform of Pope Francis.

Archbishop Tscherrig’s appointment is thus the end of the Italian exception. The Holy See is following the general rule that the nuncio is not of the nationality of the country he is working in, also with regards to Italy. This non-written rule was intended to render a nuncio free of undue cultural influence. With this appointment, the Italian exception comes to an end.

The end of the Italian exception comes at the conclusion of a long path, that also involves the laws of Vatican City State. A milestone in this path was probably the Holy See’s financial reform, initially tailored on the Italian anti-money laundering law and together with Italians, and with time made more consistent with the international standards and made to fit the Vatican City State peculiarities, also involving foreign advisors that were then included among the Holy See’s officials.

The appointment of Archbishop Tscherrig is thus the response to those who asked for less Italian centrality in the Curia appointments during the 2013 pre-conclave meeting.

However, this response needs to be balanced. Historically, the pontifical diplomacy stayed “Roman” by tradition and lifestyle.

Achille Silvestrini, once out of office, helped in providing care at the house for disadvantaged children “Villa Nazareth”, that was founded by another important Vatican diplomat, Cardinal Domenico Tardini. Cardinal Agostino Casaroli, whose work is highly regarded today, went as “Fr. Agostino” in the Roman prisons.

The posts in the Roman Curia have been ever more professionalized. But, beyond the Italian exception, there is really the need for a balance. On the one hand, every kind of subordination to Italy should be abandoned. On the other hand, it is perhaps good to recover that “Roman” tradition that makes the Church really universal.

Perhaps, this is the real issue at stake with Curia reform. A new balance between local diocese and the Holy See is being sought – and the motu proprio Magnum Principium on the translation of liturgical texts is apparently an attempt in this sense. A path to make the Church ever more universal has been laid, through appointments and Pope Francis’ reshuffle of the Council of Cardinals. At the same time, there is a need to look back to Romanity. The Church is Catholic, Apostolic and Roman. This would be the real novelty in the current discussion, after about 50 years during which the Holy See had set its gaze outwards.