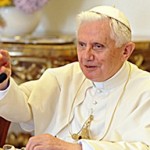 “A theological family.” This is how Fr. Stephan Horn, Salvatorian, describes the circle of former students of Joseph Ratzinger. Fr. Horn served as academic assistant to Joseph Ratzinger in Regensburg from 1971 to 1997, and today he is the secretary of the Ratzinger Schuelerkreis, which gathers once a year since 1978. In an interview granted to ACI Stampa and Catholic News Agency last week, he explained that Benedict XVI wanted the group to be a “theological family.”

The terminology is precise, as that of all the theologians who have studied with Benedict XVI. The notion of family is the interpretative key to understanding Benedict XVI’s pontificate, but it also crucial in view of the upcoming Synod of Bishops. The discussion at the Synod, until now, has mostly focused on the pastoral care of couples in difficulty, such as the divorced and civilly remarried, on marriage preparation courses, on contraception, and on homosexual couples. But the way the family becomes a living cell of society is not one of the core topics on the agenda, or at least, it does not seem to be.

Here then is Benedict XVI’s response, one that is simple but also difficult to achieve. When his former students asked Ratzinger at the time he was appointed Archbishop of Munich, to meet once a year, their professor accepted. But he did not want these meetings to be simply a meeting between the former students and their teacher, nor mere symposiums. His students were to get along together, to discuss with each other, to enjoy good relations. Discussions needed to be frank and firm, vivid, with no fear. No diplomacy among friends. But the members of “the Circle” were tasked with the goal of becoming friends. More, they had to represent a “theological family,” a family that showed reciprocal care, one for the other.

For this reason, Schuelerkreis members often phone one another, whenever their duties permit. Some of them are missionaries, some of them even bishops, one of them now runs an important publishing house, and so on.

All of them have a common point of view, which comes from Professor Ratzinger’s lectures. And although each of them develops these ideas in different ways, they are always able to reciprocate interests and come together in unity.

Benedict XVI wanted to transfer this notion of family to the Church, and he probably did not understand why members of the Church did not understand it. This inability to understand may be glimpsed in the (bitter) letter he wrote after the polemics following his decision to revoke the excommunication of four Lefebvrist bishops. “If you bite and devour each other, watch out or you will be destroyed by each other,” he said, recalling one of St. Paul’s letters (Gal 5:15).

All the endeavors of his pontificate form part of this search for unity within the Church, with the aim of generating a real, familial, collegiality.

When the scandal over the leaking of confidential documents, later called Vatileaks, broke, Cardinal Tarcisio Bertone, Secretary of State, but above all loyal to Benedict XVI, explained in one of the periodic meetings with the heads of Vatican dicasteries the method they used at the Congregation for the Doctrine of the Faith for drafting documents. The method was based on full collegiality and transparency, but it was not followed in other dicateries of the Vatican where documents were leaked and used to bite and devour certain individuals.

When the clergy sex abuse crisis in Ireland broke, Benedict XVI used the same approach: he held two meetings with the Irish bishops, and then sent a pastoral letter to Irish Catholics shedding light to the Church’s responsibility. But he asked to the Irish bishops to work in communion, and to find a way out themselves.

Above all, when Benedict XVI was elected Pope, he took the decision not to remove the heads of curial departments, but to shape his personal curia step by step. The real goal was to unify the old and the new establishment, the common purpose being the good of the Church.

Unity, in the end, might be considered the leit motiv of Benedict XVI’s pontificate. The dialogue opened with the traditionalist Lefebvrist movement represented the attempt to recompose this piece of a Church that was internally wounded; the establishment of the Anglican ordinariate represented his wish to enter in an even more profound dialogue with English Protestants; his speeches to the Protestant world, especially those given during his 2011 trip to Germany, were meant to explain that faith was not a political issue (many expected the ecumenical gift of the revocation of the excommunication of Luther), but was mostly the effort to find a common path to God.

Benedict XVI’s method was communion, the final goal was to establish a family. There are differences within a family. But these differences are reunited by the mutual love between members and their love for their parents, specifically for our Father who is in heaven.

This goal has been achieved in the Ratzinger Schuelerkreis where Benedict XVI’s words and example have been fully followed. The Ratzinger Schuelerkreis is not merely a theological family. From the Schulerkreis thought is developed and radiated outside, generating a chain that includes a new generation. This is the reason that a New Schuelerkreis was estblished in 2008, composed of young people, students of Joseph Ratzinger’s theological work. This young students are able to enjoy the friendship and ‘paternity’ of members of the old Schuelerkreis. The young people hold symposiums open to the public while grounding everything they do in the notion that “theology and charity are separate: the one helps the other in facing the world’s challenges.”

Paradoxically, this notion of family based on communion is one of the less discussed in view of the Synod on the family. Yet, this Synod will be on the family, and is intended to meet the modern challenges of the family. But the discussion is never about the way how to establish a family.

The approach employed by the Synod seems to be merely normative, focused on pragmatic problems of the divorced and civilly remarried, and on pastoral care for homosexual couples. In symposiums and meetings, experts ask the Church to be wary of taking a merely “legalistic” approach to this issue. Pope Francis himself has warned against closing in on a mere casuistry in his opening address at the 2014 Synod.

But the discussion taking place in media is merely about practical issues. The starting point is always sociological. Here there is no simple dialectic between progressives and conservatives. The media mostly speak about the need to adapt the contents of faith to the current situation among Catholics.

However, this is a merely intellectual discussion from which to start the Synod discussion. The Ratzinger Schuelerkreis experience shows that the family generates a real intellectual discussion, and not the opposite. Benedict XVI, in the end, always thought that theology was not the only way to reach out for faith. Fr. Horn explained that Ratzinger places the theology of the saints before the theology of theologians, that is, the example before the word.

Pope Francis seemingly follows this path. Many of the social issues the Pope raises were already part of the Benedict XVI’s social teaching. Francis’ demand for a desecularization is the same that Benedict XVI advanced during his 2011 trip to Germany. And Benedict XVI always looked for new ways of speaking about God, as does Pope Francis.

However, the Church of Pope Francis does not seem to make use of communion as an instrument, thus failing to establish a family. It is widely said that there are “power lobbies” and even a “magic circle” around Pope Francis. It seems evident that there is an agenda at work behind Pope Francis’ back, as his biographer Austen Ivereigh suggested when he wrote about a “team Bergoglio” that promoted his election.

It is generally hoped that Pope Francis cleans up the corruption in the Vatican, as the sole man at the controls. At the same time, it is widely hoped that he unilaterally carries forward a doctrinal revolution, at least on disciplinary aspects like access to sacramental Communion for divorced and civilly remarried Catholics.

This is not a collegial approach, but the opposite. Rather than generating a single, unified family, this approach generates many families, each of them with their own point of view that they are not going to give up in the name of the common good.

If Pope Francis wants to achieve the model of Church he reportedly has in mind, perhaps he should get back to the notion of a “theological family” that Benedict XVI developed de facto with the Ratzinger Schuelerkreis. This notion is the real hidden legacy of the Pope Emeritus.