Pope Francis, Fatima and the World Order without God Is Pope Francis really a “pop Pope”? 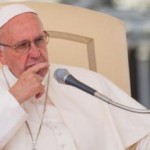 Why are sacraments so important for the Church? Why doesn’t the Church grant access to sacraments to all? These are the implicit questions in the debate that arose around Amoris Laetitia. This debate bears the same limit of all the debates swirling around Pope Francis’s pontificate: it creates a division among the parties.

In the case of Amoris Laetitia, everything was reduced to a sort of casuistry, which is exactly what Pope Francis has asked the Church to avoid since the beginning of his pontificate. On the one hand, there are those who maintain that Amoris Laetitia actually opens access to sacramental communion for Catholics who are divorced and civilly remarried; on the other hand, there are those who specify that this alleged opening is signalled in just one footnote of the apostolic exhortation, and that the document should be interpreted in the only way the Church’s documents can be: in continuity with the Church’s magisterium.

De facto, the debate only sporadically touched the issue of the importance of the sacraments, both of the Eucharist and of matrimony. With some exceptions. Speaking on the Eucharist, Cardinal Robert Sarah – currently Prefect of the Congregation for Divine Worship – had fiery words. He publicly stressed that the Eucharist is not just a meal, and only if we were to consider it as such, could everyone be granted access to it.

But Cardinal Sarah – who also strongly condemns today’s secularization, and praises a return to the traditional spirituality – is now at the margins of these very debates. While the possibility of an ecumenical Mass is reportedly being explored, the Cardinal is ever more isolated within his own Congregation. Points of view like the Cardinal’s do not enjoy the media’s sympathy.

There is, however, an unprecedented point of view on the issue, that the Van Thuan Observatory for the Social Teaching of the Church put on the table in one of its latest newsletters. The Observatory noted that there is a direct link between the sacraments of matrimony and Eucharist and Catholic social commitment.

In a few words, this is the rationale: if the sense of Eucharist is lost, the social teaching of the Church also fails. Arguments to support this view were provided by Stefano Fontana, Director of the Observatory.

The text has many noteworthy indications, beyond the – now trivial – statement that family is the living cell of society. The first noteworthy indication is that everything tends toward an order that God the Creator wanted – and the theme of order is very much present, for example, in St. John XXIII’s encyclical Pacem in Terris. Fontana however notes that the order is not self-sustainable. It needs grace. Otherwise – he argues – civil marriages, civil unions and cohabitation, even if they respond to the natural order of man and woman being together, are often not solid and do not represent a forever oriented to life.

It is the grace of the sacrament that makes this bond stronger, beyond the threats of time. Nature by itself cannot provide a state of grace.

Fontana goes on. He says that, in order to have order, relations must have a scope, and the scope of marital relations is procreation, that is, co-operating with God the Creator in the work of creation. Fontana notes that “only in marriage between man and woman” can one find the “welcoming complementarity” according to an order that is at the base of “any other social relations” intended “according to an order and not according to our wishes.” This means, in the end, that “without marriage there no sociality, society, or social order.”

For this reason, the Church has always defended marriage by considering adulterous relations as an “intrinsic evil”, and by defending marriage, it defended “the whole society and its order.”

That is why – Fontana argues – if “adultery will turn from an objective situation of sin to a situation to be evaluated case by case, if its interpretation is devolved merely to the individual conscience, and if it is possible that the divorced and remarried who live together more uxorio have valid access to the Eucharist,” this protection would be lacking And this lack of protection would have negative consequences on the Church’s social teaching.

This is when the sacrament of the Eucharist comes into the play. “A diminished theological consideration of Eucharist” – Fontana underscores – “would imply important consequences in Catholic commitment to the social teaching of the Church,” because “Eucharist is the true foundation of communion among men,” while charity has “in the sacrament of the altar its final nourishment.” No human or social virtue “could hold on by itself,” writes Fontana.

In the end, “all Christian commitment in building the world according to God’s plan for salvation finds a theological motivation in the Eucharist and in all sacraments, from which comes the regeneration that brings about the transformation of social relations.”

Fontana concludes that granting to the divorced and civilly remarried access to the Eucharist would “cause many difficulties in the Catholic commitment to defend and promote the family and to incarnate the principles of social teaching in society,” even though this access would be granted “according to a case-by-case logic, that is, without formally touching doctrine but concretizing it with a pastoral practice detached from doctrine.”

Fontana’s writing not only represents a different and more profound point of view of the debate. It also goes beyond the dichotomy between praxis and doctrine, a main topic of discussion often based on Pope Francis’ claim that “realities are greater than ideas.”

This latter principle – one of the four principles the Pope outlined in Evangelii gaudium – is certainly a legacy of the Latin American Church mentality. In South America, the Church is one – if not the only – of the social forces that are called on to help the poor. There, concrete aid must come before evangelization, in many cases.

But in the end, this logic cannot work, as missionary Piero Gheddo stressed a couple of years ago. The crisis of the missions – he stressed – comes from the lack of a strong preaching anchored in the Gospel.

Fr. Gheddo’s rationale is Fontana’s. Social commitment, the fundamental option for the poor, the criticism of global finances and the ecological push – all topics at the center of the social teaching of the Church which has had greater impetus under Pope Francis – would no longer have any foundation if their theological meaning were lost. How can there be justice without the grace given by the sacrament? How can the principle of mercy hold?

When Eucharist becomes less important, the Church risks turning into a merciful NGO, something that Pope Francis always asks the faithful to avoid.

Despite that, the issue of sacramental theology seems to be underestimated in the name of a pragmatism that aims at bridging the Church with the peripheries and with non-believers, as well as with the idea that theology is a path to be undertaken while walking, while things are accomplished – as Pope Francis explained during his recent visit to the Anglican church of All Saints, situated in the heart of Rome.

The issue of sacraments was underestimated when Pope Francis did not observe a single moment of prayer during his visit to European Union institutions on November 25, 2014. The speeches he delivered dealt with social teaching and Christian values. But the absence of a moment of prayer or of a meeting with the Catholic members of Parliament, gave traction to the secularist notion that the Pope is just a Head of State like any other. He is not. He is a Head of State because of his spiritual role, and not vice-versa.

When Curia reform is being discussed, the main issues are the way the dicasteries function and a needed streamlining of the Curia ranks, while cardinals and bishops are treated as if all the open issues can be solved by a more massive commitment of lay people within the Curia. It is not so. The real issue at stake – and Pope Francis always stresses this, too – is that of a conversion of hearts. But what form can a conversion of hearts take if the discussion over the Curia reform does not deal with the theological meaning of the dicasteries and their mission of evangelization, but only with their organization?

Behind Pope Francis, there is a world that, by underestimating the theological meaning of actions, risks putting at stake the same motivations which form the basis of Pope Francis’s concern for peoples and popular movements – to ask for a conversion of hearts, to make the Church an agent of peace and an axis in the relations between people and nations.

The implicit issue at stake is the absence of theology, or a manipulative use of theology which aims to destroy the Church. Understanding the process from the roots is crucial. It is more important than sticking to the current discussion that grab headlines. It is about time to set our gaze farther.

To bring the Church beyond the stall of the current discussion, beyond the division between progressives and conservatives. It is about time to return to the Joy of the Gospel, a theme that is never explored despite the fact that “The Joy of the Gospel” is the title of Pope Francis’s programmatic apostolic exhortation, Evangelii gaudium. It is paradoxical, for a pontificate that aims to be first of all a missionary pontificate.