Pope Francis, who wants to change the Church? What can Pope Francis learn from Eastern Churches?

Pope Francis and the role of the press 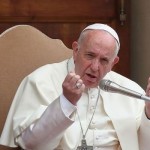 The document is courageous because it sheds light on the role of the mass media. The media spreads information but does not process it, or it uses data to foster a certain kind of ideology and prejudice rather than seeking the truth.

The document of the Apostolic Penitentiary notes that “communicational hypertrophy seems to turn against the truth and, as a consequence, against God, and man.” The document also considers that “during the last decades, certain greed for information spread, almost prescinding from their real reliability and importance.”

In the end, the document reads, “the world of communications is seemingly willing to replace reality, by both conditioning the perception of reality and manipulating the understanding of reality.”

Even believers do that, by sometimes employing “personal energies looking for news or for scandals that feed some public opinion,” which have “scopes and aims that do not belong to the nature of the Church.”

It is the second time in a few months that a voice from the Vatican raises these concerns. Pope Francis shed light on the topic at the end of the anti-abuse summit in February. Delivering the final speech, Pope Francis underscored: “The time has come, then, to work together to eradicate this evil from the body of our humanity, by adopting every necessary measure already in force on the international level and ecclesial levels. The time has come to find a correct equilibrium of all values in play and to provide uniform directives for the Church, avoiding the two extremes of a ‘justicialism’ provoked by guilt for past errors and media pressure, and a defensiveness that fails to confront the causes and effects of these grave crimes”.

Pope Francis had implicitly recognized that there is pressure from the media. Doing that, he made a shift. The anti-abuse summit started as a bridge with the media, as a thanksgiving to the press for highlighting abuse.

Pope Francis also took a sharp turn from the positions he expressed during his Christmas wishes speech to the Roman Curia in December. During that speech, he had praised the media that shed light on cases of abuse.

The anti-abuse summit marked a shift, which led to the Apostolic Penitentiary declaration. However, why did the Holy See line change?

The scandal of abuse of minors by clergy was always instrumentalized not just to condemn those who were guilty, but also to attack the Catholic Church. In particular, the Holy See sovereignty was questioned. Too often, court trials or attempted prosecutions in the US referred to the Church as a company, and there were requests to have the Pope as a witness as if he was a CEO who must take responsibility for all of his employees.

These attempts bore no fruit, as the Holy See is a sovereign state, and the courts did not formally accept any of these claims.

The anti-Church strategy changed, thus. In 2014, the Holy See submitted its periodic report on the implementation of the Convention on the Rights of the Child. The committee in charge of reviewing the report did not get the point. Or, if they did get it, they pretended not to.

The final report blamed the Church for “the code of silence,” which prevented the priests from denouncing the abuse they got to know about. That report was the signal for the shift on the strategy.

This kind of attacks finds fertile ground in the media, as a negative prejudice also feeds the press on the Catholic Church.

The note by the Penitentiary strongly points out that “the defense of the sacramental seal and the sanctity of confession will never constitute any form of connivance with evil. On the contrary, they are the only real antidote to the evil that threats man and the whole world. They are the real possibility to abandon themselves to the love of God, to be converted and transformed by this love”.

With these words, the note preventively rejects the allegations of those – mostly anticlerical viewpoints – that present the abolition of the seal of confession as the solution to sex abuse.

Archbishop Christopher Prowse of Canberra and Goulburn stressed in an op-ed that “no sexual harasser would ever come to confession to a priest if he knew the priest would be compelled to dennounce him.”

So, if the violation of the seal is mandatory, “the remote possibility that these people confess, and to recommend them to turn themselves into the authorities, disappear.”

The document of the Penitentiary is not only crucial for its defense of the seal of confession but also because it addresses the issues of professional secrecy. This is not a minor issue. In Italy, Bishop Francesco Cavina resigned after he ended up in the middle of an investigation about him that later proved unsubstantiated. Tapped telephone conversations of Bishop Cavina were published, including some with his spiritual children.

The Penitentiary note reads that “in a time of standardized communication, which burns any information and along with it also part of the life of the people, we are called to learn the strength of the word, its constructive power, and its destructive potential, again. We must be vigilant so that no one violates the Sacramental seal, and so that the needed confidentiality connected with the ecclesial ministry be jealously guarded, with the only goal of truth and the integral good of the people.”

The note also points the finger at the spreading of “information of any kind, even the most private and confidential, that inevitably have an impact on ecclesial life, induce or at least help, rash judgments, illegitimately and irreparably damage the good fame of the other and the right of every person to defend his own privacy.”

The Penitentiary also highlights the “negative prejudice towards the Catholic Church,” always more spread in Western countries. This prejudice does not hesitate to show up, even with discriminatory laws, with the rationale that the “Church herself, in some subjects, will conform its juridical order to the civil orders of the states in which she is installed, as the only possible guarantee of correctness and rightness.”

In the end, the Penitentiary proves that the shift of strategy is the outcome of a change in the scenario. Before, it was thought that the Church could gain better consideration or some “sympathy” from the dialogue with media. Now, it is clear that this is impossible.

It is not about covering up abuse or scandal. The Church is called to defend the faith in the first place and to defend her sovereignty in the second place. Sovereignty is the mean through which the Holy See helps and advocates for religious freedom and works to allow every human being to reach integral human development.

In the end, it seems, the Holy See understood it could be in the world, but it does not belong to the world. If the Church wants to preserve itself, it must defend the faith.