Pope Francis: The State of Reforms 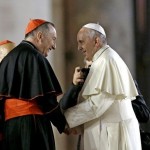 Pope Francis’s meeting with the Forum of Catholic NGO’s marked once again the extraordinary activity of the Secretariat of State, at least in the diplomatic field.

The Catholic NGO’s Forum was established back in 2007. Its goal was to give shape and coordination to the NGO’s with two common characters: that of being Catholic in inspiration, and that of being international and, above all, committed in the multilateral field.

But since 2007 the Forum has almost not met. Its work lost some of its appeal, while more limited groups of the Forum were established on a territorial basis in order to coordinate among themselves better on some specific issues.

Ten years later the Forum has come back to life and was strengthened following a two-day-long gathering that took place not far from the Vatican. Many officials of the Vatican Secretariat of State took part in his meeting, as well as all of the Vatican nuncios accredited to multilateral organizations – the only, justified absence was that of Archbishop Ivan Jurkovic, Holy See Permanent Observer to the UN Office in Geneva, who was in Buenos Aires taking part in a meeting of the World Trade Organization.

At the end of the meetings it was decided that a foundation would be established to make the Forum’s commitment more concrete, and the “Foundational Values” of the Forum were rewritten in order to give new strength to the organization. These conclusions were reached as a result of the patronage of the Vatican Secretariat of State which committed a great deal to carrying everything out and which will maintain a primary role.

This is only one of the frontline issues of the Secretariat of State, but it is very close to the heart of Cardinal Pietro Parolin, Vatican Secretary of State, who took part in the first meeting of the Forum as the Vatican’s “Vice Minister for Foreign Affairs.”

While Vatican diplomats take the floor during meetings of multilateral organizations, advocating for the poor and the marginalized, Pope Francis carries forward his personal diplomacy at the peripheries (as is understood in terms of the destinations of his international trips), a very particular diplomacy of sanctification (e.g., Laos, one of the few countries in the world with no diplomatic ties to the Vatican, witnessed a beatification and the creation of a new Cardinal in the last years) and a diplomacy of prayer, intended to favor the “culture of the encounter” that Pope Francis promotes.

At the same time, the Vatican Secretariat of State goes beyond Pope Francis’s gestures. The Pope has made the Holy See a humanitarian corridor, as when on board the papal flight while returning from his one day trip to Lesbos, he took some refugees back with him to Italy. The Secretariat of State is working in international organizations to advocate on behalf of a legally grounded approach to migration. There are numerous interventions by the Holy See in multilateral meetings that translate Pope Francis’s words into a diplomatic language that goes beyond the mere pretense of solidarity and that has a longer term vision.

Some observers see in this Third Section a way for Pope Francis to increase his control over the nunciatures and the diplomatic staff of the Holy See. This is one point of view, certainly, but it seems far from reality. It is yet to be understood how much the Third Section will impact the general work of the Secretariat of State. What should be noted is that the overall work of the Secretariat of State is moving in the direction of fostering a new sensitivity to global issues, with renewed content and strong diplomacy. This direction seems to be a counter trend with respect to the course of Curia reform currently underway.

The matter of the Third Section of the Secretariat of State was not part of the agenda of the latest Council of Cardinals’ meeting, although many of the previous meetings focused on the issue of the formation of nuncios.

This detail provides a second aspect of ongoing developments in the Vatican. While the Secretariat of State has clearly regained its central role, curial reforms are generally proceeding in a different direction. There are reform guidelines, and everyone is following these guidelines. But these guidelines do not really seem to shape the overall path of reform.

Seen from a certain point of view this is good, because curial officials can carry out their own reform freely and in the way they deem opportune, though following the Pope’s indication. But from another perspective, the notion of undertaking reforms “while walking,” without a general framework and clear goals, risks generating ever more confusion.

It is also noteworthy that the 22nd meeting of the Council of Cardinals did not get into the details concerning the establishment of the Third Section of the Secretariat of State, but just checked on the reforms already underway. This week of reforms was characterized by the birth of the new portal of the Secretariat for Communications, but even this is not the reform, but a first visible sign of the reform.

The Council heard reports by Msgr. Dario Viganò on the Vatican media reform, by Frs. Michael Czerny and Fabio Baggio on migration issues, by Cardinal Sean O’Malley on the progress of the Pontifical Commission for the Protection of Minors and by Cardinal Kevin J. Farrell on how the dicastery for Laity, Family and Life is taking shape.

Each of these individuals reported on the work being done and on developments, and each demonstrated clearly his wish to give the new dicasteries his personal imprint, in accordance with a reform still without “constitutional paper,” that is, an Apostolic Constitution like “Pastor Bonus” that clearly describes mandates and functions.

It seems that Curia reform is confusing because it aims to devolve informally some matters to local bishops, while the Secretariat of State nevertheless understands the importance of central coordination and continues to carry it out, at least in the realm of diplomacy.

In the end, bishops work on the big issues, taking note of Pope Francis’s statements that he does not want to get involved in politics – although he is strongly political when he speaks, let’s say, to the popular movements or in his social documents.

One example of the new activism of bishops came from the meeting of the legal consultants of the European Bishops Conferences. Characterized by the CCEE’s president Cardinal Angelo Bagnasco’s denunciation of the coming “world order without God,” the CCEE legal consultants took a collective position on the end of life issue: “No one can kill anyone.” And concerning the migrant crisis, they presented a more concrete approach. They insisted that the Church is always on the frontline, but they also stated that there needs to be a legal framework which can help states to work.

This is an example underscoring a single point: that strong content for the Church’s social positions comes now from bishops, while the Vatican, once a place from where the contents were provided, is now mostly committed to reforming structures, not in reshaping ideas.

This is now the arena in which the main players emerge – for instance, the abovementioned Cardinal Bagnasco, along with Cardinal Wilhelm Eijk of Utrecht, who asked for a magisterial document on gender; Major Archbishop Sviatoslav Shevchuk of the Ukrainian Greek Catholic Church, who did not fail to remind the Pope of the dangers of the war in the Ukraine, and to voice his opinion about the Pope’s approach to that issue.

This is why the Secretariat of State’s commitment is apparently a counter trend with respect to the Curia. The diplomatic commitment is, in the end, the commitment to find a common ground in the name of the common good.

These moves must be carefully pondered. What if the Pope accompanies this diplomatic work with another interesting diplomatic gesture?