Between the End of the Old World and the Beginning of a New One: Benedict XVI’s reflections 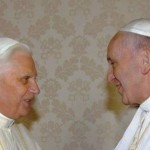 Benedict XVI’s “Last Conversations,” the recently published book interview with journalist Peter Seewald is not only a sort of final chapter of the Pope Emeritus’s biography – he will soon turn 90 – the book is a clue to interpreting the Church that shows once more just how few people really understand the revolutionary impact of the pontificate that preceded Pope Francis’s. It was a quiet revolution, based on a unique awareness: how necessary it is today to announce and preserve the Faith.

Pope Francis’s pontificate, then, is characterized really as a pontificate of transition, though this does not necessarily mean it is a transitional one. Certainly, the election of a South American Pope confirms – Benedict XVI himself admits – that Christianity is no longer the thrust of European society. On the contrary, Europe lives off of the energy coming from other continents: from South America, a Church that is, however, suffering a crisis caused by evangelical sects; from Africa, a young and enthusiastic Church; and from some Churches in Asia like the Philippines. These Christian outposts must be taken into consideration.

Benedict finds it to be a natural consequence that, as the Church has changed its shape, a new way to announce the Gospel must be sought. And this is the reason why the Pope Emeritus likes the way Pope Francis is tackling the issue. Benedict XVI describes Pope Francis as a decision-maker and a “man who stands for a pragmatic reform,” appreciating the Pope’s former experience in administration. Benedict adds that he is surprised by the human warmth Pope Francis has for him, even in letters that Pope Francis writes “in very small letters, smaller than mine. In comparison, I write very big letters.”

Is this the moment of the pragmatic reform? Looking at the whole apparatus Pope Francis has set up (from the Commissions to the Councils to the new dicasteries), it seems that everyone is waiting for a pragmatic turn.

On the other hand, Benedict XVI points out another aspect. While rejecting accusations of having not been a man of government, and while also admitting some of his limits in decision-making, the Pope Emeritus nevertheless emphasizes that a Pope “must not necessarily be a theologian,” although he “must have great intellectual depth.” In the end, a theological rationale, based on faith and expressed with reason, is needed in order to govern the Church.

These theological bases are needed despite any path of reform that a Pope might tread. Benedict XVI said he knew that his pontificate was going to be short, that he obviously could not start big reforms – “I could not, for example, convoke a Council.” But – he added – since there was not the opportunity for a Council, he could instead develop synodality.

Though synodality is one of the main topics of Pope Francis’s pontificate, it is not surprising that it took Benedict XVI to develop it before. The Pope Emeritus is often described as a centralizer. But this is not true. Benedict XVI also emphasizes that he always supported the importance and autonomy of local Churches, and that his views accord perfectly with Evangelii Gaudium, the Apostolic Exhortation that is Pope Francis’s program of government.

However, Benedict XVI added, the local Churches often do not take responsibility for their decisions. This is a crucial issue: local Churches know of their privileged relationship with Rome, that is, with the universal Church, but they often lament that this relationship deprives them of freedom. However, this lack of freedom in fact stems from a lack of courage on their part in making decisions that run contrary to contemporary currents of thought. In the moment when they have to make difficult decisions, they turn to Rome, and then they blame Rome for any criticism.

This way of doing things can be noted in the discussions around the issue of sacramental communion for divorced and remarried Catholics, and in the discussions surrounding the two synods on the family that Pope Francis wanted. In the end, no one formally wants to change doctrine, as it would be a challenging step; but everyone wants a substantial green light to behave pastorally in the most expedient way without being judged by central authority, to which they have to pay obedience.

Benedict XVI describes Rome’s intervention in local Churches as an act of love and concern, and not as an imposition. Certainly, interventions are needed.

One example is the clergy sex abuse scandal. The Pope Emeritus rejects the accusation of a soft touch in handling clerical sexual abuse. He strongly admits that procedures for handling sex abuse cases needed to be reformed, and that the best reform possible was that of transferring the competence to the Congregation for the Doctrine of the Faith, since the Congregation for the Clergy was not acting decisively on the matter. Benedict XVI also admits that he pondered the risks of the decision, though he insists that a signal was needed. For this reason, a new juridical framework was developed that de facto resolved some of the issues impeding the local Churches. In many cases, pedophilia accusations were not reported to Rome by the local Churches, with the consequence that Rome could not promptly initiate the necessary prosecutions.

It turns out that what is currently being done, that is, the reforms for handling these cases that Pope Francis is setting up, are based on the juridical framework which Benedict XVI established as Prefect of the Congregation for the Doctrine of the Faith and then as Pope.

However, this juridical framework is not the outcome of one only person’s efforts, but the fruit of a wide open discussion. “As a Prefect, I never wanted personally to sign a document,” Benedict XVI says. He explains that he wanted each document to be part of a common effort, as if everything had to be the fruit of collegiality within the Congregation. He followed the same method as Pope. Notwithstanding plots, resistance and dirtiness within the Church that he denounced during the 2005 Stations of the Cross Meditations, Benedict XVI praises the role of the hidden Vatican composed of good people who believe in the Church and tirelessly work to serve it.

Benedict XVI is also aware of the problems of the barque of Peter buffeted by public opinion. This buffeting started during the Second Vatican Council. At that time, Benedict XVI was a progressive, he admits. But he adds that during that period being progressive meant to be among those who wanted to renew the faith, and did not mean breaking with the tradition. For this reason, after the Second Vatican Council he was committed to explaining the real spirit of the reform envisioned by the Council, and he became aware that the issue of truth had become pivotal.

“We cannot own truth, but truth is something that moves toward us,” Benedict XVI says to Seewald. This topic is one of his favorite, and recurs in his writings, speeches, and homilies.

In the end, this is the final topic. Beyond his extraordinary humility, the book interview shows that his every effort is part of his wider effort to announce the word of God. Evangelization is the main topic. Beyond reforms and organization, this need to bring God to the heart of man always remains.

Everything Benedict XVI did, he did for Church unity and faith. It is not surprising that Benedict XVI is still annoyed by critics of his reform of the Prayer for the Jews contained in the Good Friday liturgy as found in the 1965 Roman Missal, and on the “liberalization” of that ancient rite. It is not even surprising that the biggest pain to him appears to be the notorious case of the lifting of the excommunication on the Lefebvrist Bishop Richard Williamson.

Benedict XVI revoked the excommunication of four Lefebvrist bishops, but one of them – Richard Williamson – was well known for having made anti-Semitic declarations. After the scandal broke, Benedict XVI personally wrote a letter complaining about “biting and devouring” within the Catholic Church, quoting an epistle of St. Paul.

Perhaps, we should read Pope Francis’s pontificate in those terms. We should try to figure out whether his personal charism will bring any long term benefits to the Church, rather than focusing on the issues of reforms. Understanding reforms is necessary for a functional analysis, but this cannot be fully applied to an institution whose end is eternity.

So, Benedict XVI gives us once more the interpretative keys to understand the Church. While his circle of students (the Ratzinger Schuelerkreis) already looks forward to the re-evangelization of Europe and the lively Church that this will require, the Pope Emeritus continues to intercede for the Church. He is perhaps the last Pope of an Old World, but now is time to build a new one. It is a big challenge, one to which Pope Benedict contributes with his prayer and thoughts, even sometimes counselling Pope Francis, as the book revealed. It is always a discrete commitment, with the joy that the Church is always young and alive. Benedict XVI said this after St. John Paul II’s death – another topic serving as a guideline for understanding these last conversations.