Pope Francis, are the reforms completed? 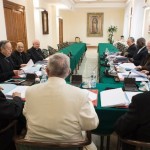 The 25th meeting of the Council of Cardinals ended with the release of a “progress report” on reforms and the title of the new Apostolic Constitution that will regulate functions and competences of the Curia office. Pope Francis will obviously be able to make all the adjustments he wants to the draft. At the end of the process, when the new Constitution will be delivered, the Curia will be definitively structured.

The Council of Cardinals’ progress report, released by the Holy See Press Office, reads that “the Council considers that, following the graduality principle, that the Pope has many times recalled, the reform has already been put into effect in more than a few occasions.”

The passage is noteworthy, as it certifies the approach of the “reform made while walking” outlined by Bishop Marcello Semeraro, secretary of the Council of Cardinals, in two different articles published in the Italian Catholic magazine Il Regno and concretized by the way these changes have been operated.

Certainly, the principle of reform as a dynamic process foresees many adjustments, and this can be seen in the list of motu proprios and Papal chirographs at the end of the Council of Cardinals’ progress report.

Out of the 25 documents presented as part of the reform, there are some about a reform path initiated under Benedict XVI; other documents are part of a path that Pope Francis began and closed, as the outcomes were not good; and other document are part of concrete action plans – namely, the establishment of the Secretariat for the Economy, the Council for the Economy, the Vatican General Auditor, the Secretariat for Communication (now downgraded to a dicastery) and the dicasteries for the Promotion of the Integral Human Development and Laity, Family and Life.

Getting more into details, the list of documents include, for instance, the two chirographs that have established the Pontifical Commission of Reference for the Institute for Religious Works and for the Holy See economic-administrative organization, both of them dissolved once their functions were not needed any more.

In the end, the 2013 appointment of professor Vincenzo Buonomo as counsellor to the Vatican City State marked the end of the era of the external consultants. Professor Buonomo was recently appointed the first lay rector of the Pontifical Lateran University.

Among the financial reforms listed, it is worth noting the establishment of the Committee for Financial Security, to “bring the IOR and all the Vatican economic system to the regular adoption and complete fulfillment, with commitment and diligence, of all the standard international laws on transparency.”
However, this reform had already started under Benedict XVI, and is part of a deliberate path that was also positively assessed by the Council of Europe’s MONEYVAL committee.

That reform path also includes the consolidation of the Vatican Financial Intelligence Authority, as well as the new penal law code of Vatican City State, signed by Pope Francis at the end of a long reform process.

All of these laws and provisions are included among the list of reforms. This means that there was a world that was already moving in a precise direction, before Pope Francis was elected.

After that, there are reforms that are totally Pope Francis’. The first reforms have an economic focus, while the other has a more structural impact.

With the motu proprio “Fidelis Dispensator et Prudens,” Pope Francis started the big reform of the economy. In July 2014 the ordinary section of the Administration of the Patrimony of the Apostolic See was transferred to the then newly born Secretariat for the Economy.

In practice, a new “super ministry” of Economy and Finances was established, to replace the Prefecture for the Economic Affairs of the Holy See – that in fact is still operative. The Prefecture had been already reformed by Benedict XVI to act as a ministry of Finances.

However, the big reform of the Vatican economic department needed an adjustment, effected through the promulgation of the July 4, 2016 motu proprio “The temporal Goods.” The progress report of the Council of Cardinals explained that the adjustment was because it was considered “of maximum importance that overseeing bodies are separated from overseen bodies,” and for this reason “the areas of competence of the Secretariat for the Economy and the Administration of the Apostolic See have been better outlined.”

All of these data show there have been steps forward and back, and that, in the end, the economic structure was shaped in a way more similar to the starting point.

For what concerns the other reforms, the dicastery for the Promotion of the Integral Human Development and the dicastery for Laity, Family and Life were established, as was the Pontifical Theological Institute John Paul II for Studies on Marriage and the Family.

These latter reforms address the need for a greater coordination among dicasteries, and a sort of new mentality in discussing core issues, always consistent with the traditional issues of concern of the Catholic Church.

Pope Francis’ emphasized this new approach in his latest exhortation, Gaudete et Essultate. In the exhortation, he called for a wider vision on core issues, and to look at all the aspects of the life of the Church. To many it seemed to be a revolution. In fact, also this call was in continuity with the past.

If there is any real reform, it is that of the decentralization of competences, that touched the causes for nullity of marriages and the translation of liturgical texts. Decentralization was one of the main themes of Evangelii Gaudium, Pope Francis’ first exhortation.

Among the reforms, the establishment of the Third Section of the Secretariat of State for the pastoral care of the diplomatic corps, and the motu proprio “Learning to take leave”, that was in the end the adjustment to implement what was previously decided by Pope Francis with a papal rescript at the beginning of the pontificate, when he encouraged bishops and Curia officials to step down at the age of 75. Even in this case, the Pope made some adjustments.

In the end, all of these reforms will be included in the Praedicate Evangelium, the new Apostolic Constitution. This indicates that the path for reforms has generally ended, and there will be only some further adjustments.

To put it in general terms, the forward push for reforms seems to be exhausted at the 5th year of Pontificate. Pope Francis will however continue with his real reform, that of the profile of bishops. It is no accident that the next consistory, that will mark the moment when the majority of Cardinals in the College of Cardinals will be those created by Pope Francis, will take place June 28, the very day of the 30th anniversary of Pastor Bonus, the Apostolic Constitution that has regulated the Curia until now.